The author of the Southern Reach Trilogy and “Borne” examines “life in the broken places.”

What comes next for us — and for the planet? It’s a question being asked by anyone realistic about climate change and habitat loss. Fiction writers can’t escape it any more than scientists, and I’ve been exploring these issues since the late 1980s. Except now it seems to me that our relationship to nature occurs as much in what we think of as failed places or cities that contain landscapes we render invisible rather than think about what we’ve lost there.

For this very reason, my new post-apocalyptic novel “Borne” contains numerous themes about ecology and our relationship to nature in our modern urban settings. I’ve been calling this a book about “life in the broken places,” which admits to how much we’ve changed the planet while also acknowledging that, despite this, life continues to survive even in very devastated settings.

That acknowledgment is very important because you can easily miss the biodiversity and adaptation that can be found in places we don’t consider wilderness. Ignoring this fact seems to indicate a lack of empathy and yet another turning away — not just from nature but from our fellow human beings. Treating or making such places invisible allows even more harm to be perpetrated against all who live there. Even the false idea that deserts are lifeless results in projects such as covering miles of desert with solar panels and truly rendering them wasteland.

I thought about these ideas even in terms of where I live in Tallahassee, Florida, which has a Tree City USA designation despite being a fair-sized town of over 250,000 people. Similarly, I live pretty close to I-10, which has green strips of natural-looking land on either side but is a slaughter zone for animals trying to cross the highway. The polluted stream located one street behind our house creates a further greenway, even as it goes through water-treatment holding ponds in which I have seen animals such as a wayward beaver or muskrat, building homes from branches, and wood storks, which are a threatened species.

All of these spaces teem with life; throughout them all the birds and mammals and fish and frogs and lizards are trying to get by, despite these obstacles. Even as the holding pond is razed by the property owners every season, not always for good reason, and lies lifeless, soon enough the vegetation grows back and the animals return, too.

My earlier Southern Reach Trilogy was about layering a seething and tangled natural landscape that infringes upon the characters and reader — with the animal life kind of lurking in the vegetation — but in “Borne” I wanted the animals to stand out in stark relief, in the context of a failed city that must reinvent itself and forge new relationships between people and animals. All this other life has its own narratives, its own story to tell, one that intersects with the human but is not always beholden to the human.

All too often, we want to only see animal life for how it can be of use to us or be commodified, without acknowledging that animals have purpose that is theirs and theirs alone. Until we learn that lesson, we will continue to threaten our own continued existence on this planet; nor, it seems, do we recognize that a species could usurp our place with or without sentience, given the changes to our physical environment.

We also often seem to have encoded in our DNA or our belief systems something that makes us treat our planet as if we were alien settlers under the sway of a corrupting Manifest Destiny, almost as if we’re here to make Earth conform to some demented vision of a lost home world that is an industrial wasteland.

This is the idea that we must bend the world to our will instead of bend to it or find some compromise. It’s a kind of death wish sublimated into all kinds of rationalizations for the value of business and corporate extraction of natural resources, among other manifestations. Often, we ignore the hidden cost of traditional business in establishing so-called best-practices and in doing so create a myth of efficiency on the back of ecological destruction. In fact, we are incredibly inefficient, if the business world’s standards were applied in an objective way.

As a result, whole areas of study such as biomimicry, which we must pursue much more seriously, have not gotten as far as they would have if we had the imagination and drive to more passionately pursue them. If we could create systems that are more organic and coexist with the biosphere — that in fact reflect the biosphere’s richness and complexity — we would be much better off. Creating packing material from mushrooms to replace Styrofoam is just one small example: you just toss it in your backyard and it biodegrades in a few weeks. Some scientists are laughed at for thinking we could create wires and other conduits out of organic biological material, but in fact that’s another example of moving beyond our current derangement.

Of course, for such experiments to work we need more than imagination and research. We need a hybrid system in which the virus of our out-of-control consumerism and capitalism is cured with the vaccine of a big dose of socialism, entangled with bits and pieces from every other system or ideology that can be of use. Because in addition to continuing to adhere to old modes of thought, another killing approach is to claim territory, to, for example, say one ideology is inherently better than another, when our problems are so complex they require complex solutions.

For example, anyone who thinks that outright revolution is the answer should remember that the first thing to be jettisoned in times of political instability is any responsible stewardship of the environment.

Instead, what we must acknowledge is that capitalism isn’t going to disappear, and certainly not within the next forty years, a time period critical in terms of biomass loss and climate change. Much as I would prefer a more radical approach — perhaps one that eschews all current ideologies in favor of something new — the pragmatist in me says that our best goal is to mix capitalism with other models in hopefully beneficial and inventive ways, while blunting or transforming consumerism.

Our goal must be two-fold: to stem global warming, and in the process to help our ecosystems overall. This will cut down on human misery and also allow animal and plant populations to recover. If we don’t get smarter about these issues and abandon thought-loops and received ideas that should have been outdated long ago, we will find that geologic narratives and the narratives of other species — whether they be the narratives of viruses or of something larger — will outstrip our own. And the illusion of our control will be revealed in stark terms.

We exist in ecosystems whether we realize it or not and imbalances in ecosystems create situations where the strain to retain an old way of life just creates more useless energy use and makes collapse more imminent. The reality of the situation in my novel “Borne” is that people today already live in situations of ecological collapse and displacement. If you don’t feel that in your bones, it is because you have been sheltered from it — literally by location or economics or because you wall out the images and reports coming in from “other” places.

Hanging over all of these issues like a blade is a question: Can we avoid some version of catastrophe? No, we can’t avoid it, and what frustrates me almost as much as climate-change deniers are people who say they believe in global warming but at the same time reject the scientific evidence that suggests the worst of it will be upon us within 25 years. “Oh, that’s not going to happen,” I hear all too often.

This pushing off of the near future into the far future will doom us almost as much as climate change deniers. It’s happening right now, in front of us, not at some undetermined point in the future — and part of being responsible is looking at the yawning void directly and to fight against it and to not turn away. In this context, the recent New York Magazine article that caused such uproar, even with corrections to the science, revealed who thinks existing best-case and mid-range predictions will hold and who believes that an ever-increasing number of unknown variables, acting in combination, may bring the end of our civilization much, much sooner.

Where I am hopeful about the future it is because of what dedicated scientists and creative people are doing in the moment, and how we are beginning to understand that environmental concerns and social justice concerns are often intertwined — and that animals aren’t just objects for us to exploit and that, in addition to the fact we should respect them just because they are living things, they are also vital to our own survival. Habitats are incomplete without animals. Animals are incomplete without plants and fungi. Humans are incomplete with all of this, and we need to live more within the complex web of this wondrous world than we do.

Because that’s the way the world works. Our brains, institutions, businesses, and culture have to adapt to that or we’re simply not going to make it.

Also in The Revelator: 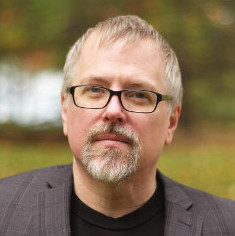 is the author of the Southern Reach Trilogy and Borne and a frequent lecturer on environmental topics.
http://twitter.com/jeffvandermeer http://www.jeffvandermeer.com/

4 thoughts on “Moving Past the Illusion of Control”