A handful of microplastic from the waters off Kamilo Beach on Hawaii. © Erica Cirino

Erica Cirino’s new book, Thicker Than Water, examines the plastic pollution crisis — and its solutions — from oilfield to landfill.

Thousands of tons of plastic waste, dubbed the Great Pacific Garbage Patch, swirl in remote ocean waters. The gyre of refuse, which contains everything from fishing nets to shampoo bottles, was first documented in 1997, but it’s still drawing researchers hoping to better understand our proliferation of plastic and how it harms ocean life.

Five years ago science writer Erica Cirino joined one such expedition to document the work of the Dutch nonprofit Plastic Change. But her journey through the world’s largest floating dump spurred her to begin chronicling not only where plastic waste ends up, but how it’s made, transported and disposed of — and who’s harmed along the way. She documents what she found in her new book, Thicker Than Water: The Quest for Solutions to the Plastic Crisis.

We spoke to Cirino — a frequent Revelator contributor — about plastic’s toxic life cycle, how the Black Lives Matter movement inspired environmental activists, and what still gives her anxiety about the future.

When you were sailing across the garbage patch, what did it feel like to be in a place that’s so far from people and yet encounter so much of our waste?

It was certainly a shock. It made me a bit melancholy because it really hit home just how big the problem was. And it made me think, if there’s nobody around, how is the plastic getting out there? It made me want to understand the whole pipeline of plastic from this giant sink of plastic in the ocean to its source.

The ocean is huge — how do researchers measure how much plastic is out there?

What’s usually used to measure plastic in the ocean — a surface trawl — is actually not totally accurate. It’s a great tool for understanding how much plastic is on the surface of the water. But it tells you very little about the ever-changing composition of plastic in the oceans. And there’s also so much that sinks beneath the surface.

While we were out at sea, we did a few experiments that showed micro- and possibly nanoplastic all the way down to 200 meters (656 feet).

So it’s not just looking on the surface that’s needed. It’s looking all the way throughout the water column to the very bottom of the sea because there have been research endeavors showing plastic on the bottom of the Mariana Trench.

It’s also important to pinpoint where it’s concentrated to understand the impact on the planet. Is it harming animals, plants, people? Where is most of the plastic accumulating? Those are a lot of the big questions we were asking out at sea.

What did you learn about who’s bearing the brunt of the harm from our plastic waste beyond marine life?

From the front of the plastic pipeline to the end, people are harmed — mostly communities of color. Typically with the plastic production pipeline, we’re talking about the extraction, processing and refining, transportation, distribution, and then the disposal of plastic. So from the oilfield to the landfill communities of color and other minority communities are being disproportionately harmed by these impacts.

Near extraction, refining and processing there are a lot of air-quality issues. When I visited communities near these industrial sites, a lot of people complained of headaches, skin problems, nausea and asthma.

It is a very toxic process. Plastic is made out of fossil fuels. It contains a lot of additives. It contains plasticizer chemicals like phthalates and PFAS. These chemicals themselves are known to be harmful, and yet companies often have repeated environmental violations in a lot of these facilities with very little done other than paying fines. People continue to suffer as the industry continues to profit.

But communities have been fighting back, and I’ve started to see a change. In 2020 with the death of George Floyd, the Black Lives Matter movement really brought attention not only to how Black people are treated by police officers, but also in terms of environmental racism.

People are beginning to take notice. Sharon Lavigne, who’s interviewed in my book, was named a Goldman Prize winner for her work against Formosa Plastics and dedication to fighting injustice. And in March 2021, the United Nations called for an end to environmental racism in Louisiana’s “Cancer Alley,” which is about 85 miles along the Mississippi of industrial development in mainly communities of color.

So the world is saying that this is a huge problem, and people are now finally listening. A lot of these communities that I’ve been speaking to have expressed to me that they’ve been fighting these issues for so long, but it’s only really now people seem to be waking up.

I think that really shows just how much of an impact the Black Lives Matter movement and other movements for racial justice have made. And it’s these small communities that are making these huge changes, which is deeply inspiring, but also expresses this need for allyship and this urgency of needing to get support from others around them.

What did you find most promising in terms of solutions?

There’s not one solution, but a major thing that we could do would be to hold the industry churning out this waste accountable. There are various legal means to do that.

But also, we can use our culture to force a change.

Communities are showing the way forward with zero-waste initiatives. Many communities, including those most disproportionately harmed, are making movements to reduce their own waste and to reduce reliance on plastic. I’ve seen communities starting their own gardens as a means to reduce waste.

It’s a cultural shift, but it’s also this big systemic shift that we need at the same time. And I think as we get more serious about climate change, we have to hold these major corporations responsible for what they produce and also for what they’ve done. So it’s not just that we have to stop the new plastic production, but we have to address all the plastic that’s now out there in landfills and the environment.

I also think we need to figure out how to completely circularize the way that we use plastic. If we use it at all. Can we use what’s all around us? Is there going to be a way to collect all the plastic?

And there’s a lot more we need to learn about the effects of plastic on human bodies. Because we do know now that it’s getting inside our gastrointestinal tracts. There is evidence that in other animals, such as fish, small plastic particles can go to the brain and actually change the fish’s behavior. Is this also happening to people? I think understanding that better is going to be a frontier in the coming years.

After immersing yourself in this problem and solutions for the last five years, how do you feel? 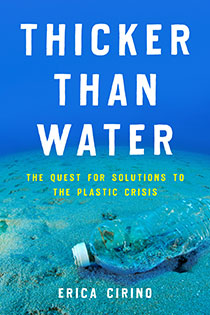 I feel anxiously excited. I learned about so many amazing efforts happening in communities all over the world. The communities that are focusing on the plastic pipeline by addressing climate change and the oil and gas companies behind fossil fuel extraction; the people fighting plastic bags and transportation of plastic; and those fighting landfills and also advocating for zero waste.

So there’s really an amazing effort going on to cut this addiction to plastic out of our lives and show us a new and healthier way forward. So I do feel hopeful.

But the anxiety is also there because it is urgent — lives are at stake and lives are being affected by this every day. And they have been affected since plastic was mass produced in the mid-1900s.

We have to also be aware that a lot of the communities that have been harmed are still being harmed, and they really need our help.