In her new book, author and ethicist Harriet Washington unearths one of the most overlooked aspects of environmental racism.

Flint, Michigan, may now be synonymous with environmental health disasters, but Flint is no anomaly, says science writer and ethicist Harriet Washington. We are a nation of Flints. From small towns like Anniston, Alabama, to big cities like Washington, D.C., environmental health dangers are widespread and communities of color are the people most likely to be assaulted by heavy metals, pesticides and other poisons.

Environmental racism has been well documented for decades — beginning with the work of sociologist Robert Bullard in Houston in the 1970s to a recent study in March on pollution burdens.

But as Washington writes in her new book A Terrible Thing to Waste: Environmental Racism and Its Assault on the American Mind, the fallout from environmental toxicity isn’t just physical. Lead, arsenic, mercury, PCBs, phthalates, DDT and even some pathogens can all rob people of their mental acuity and lower their intelligence, disrupting their livelihoods and thwarting their potential.

Washington, a former research fellow in medical ethics at Harvard Medical School and senior research scholar at the National Center for Bioethics at Tuskegee University, is also the author of Infectious Madness and Medical Apartheid, which won a National Book Critics Circle Award.

We spoke to Washington about why the dangers to mental capacity from environmental pollution are so often overlooked, why communities of color bear the brunt and what can be done about it.

I’ve always been fascinated by poisons of all kinds — everything from heavy metals to pathogens. In the early ‘80s I managed a poison-control center that was part of an upstate teaching hospital in New York. But after a while I began to see there were social patterns and so I studied public health.

I did a piece for the American Scholar called “The Well Curve” about how neglected tropical diseases were lowering the cognition of people in the developing world. And as I wrote that article, I also noted that these tropical diseases that we think of as being foreign diseases, they’re actually domestic diseases now — we have them right here in our country. And I realized that pathogens, along with the traditional heavy metals and industrial chemicals people worry about — all these things are concentrated in enclaves of people of color.

And they are in fact hobbling people cognitively and behaviorally, as well as physically. They’re stealing cognition as well as health, and this is an emergent situation.

Most of the research on environmental health issues focuses on things like cancer clusters and other kinds of impairments to physical health. Why did you decide to focus on how environmental toxins threaten intelligence and mental capacity?

I think that the lowering of intelligence is a lot harder to perceive sometimes. If you’re poisoned as an infant or maybe in the womb or as a child, behavioral problems or lowered cognition may not be recognized until decades later. We’re not always aware of the fact that these industrial chemicals and heavy metals are eroding our intelligence. It’s not as easy to see as cancer.

David Ralll, a scientist [and former director of the National Institute of Environmental Health Sciences] once said that if thalidomide [which was widely used to treat morning sickness] had lowered IQ instead of causing very visible birth defects, it would still be on the market.

I also wanted to point out how important it is to understand the exquisite vulnerability of fetuses and the young to environmental poisons. One of the arguments by industry scientists is that we’re often talking about tiny little exposures that can’t be dangerous. But we know now that tiny exposures can be devastating to a fetal brain. I think that dismissing an exposure because it’s small is very foolish.

You write in the book that poverty is often talked about as the biggest risk factor for why some communities face greater threats from environmental toxins, but actually race is a better indicator. Why is that mistake so often made and what’s the danger of it?

The fact is that being poor is a risk factor, but your race is a much stronger risk factor. If you look at data on income and toxicity, African Americans with a mean income of $50,000 to $60,000 — solidly middle class — have a much higher rate of exposure than white Americans who make $10,000 a year.

So clearly poverty is not the most important risk factor in this — race is. And I think that it’s so often described misleadingly as socio-economics because people are more comfortable with that. If you admit that it’s race rather than socioeconomics that dictates these exposures, well what are you saying? You’re admitting to racism, which is a shameful thing to admit.

Socioeconomics actually sounds better. But unfortunately, it’s also a subtle form of blaming the victim. We still have this Calvinistic hangover where it’s believed that poor people are poor because of some fault or some flaw of their own. So it’s a lot more comfortable to say they’re poor and that’s why they are at risk of toxic exposure than because they’re black or Hispanic.

What do you think we lose as a society by these assaults on intelligence from industrial chemicals and other environmental toxins? 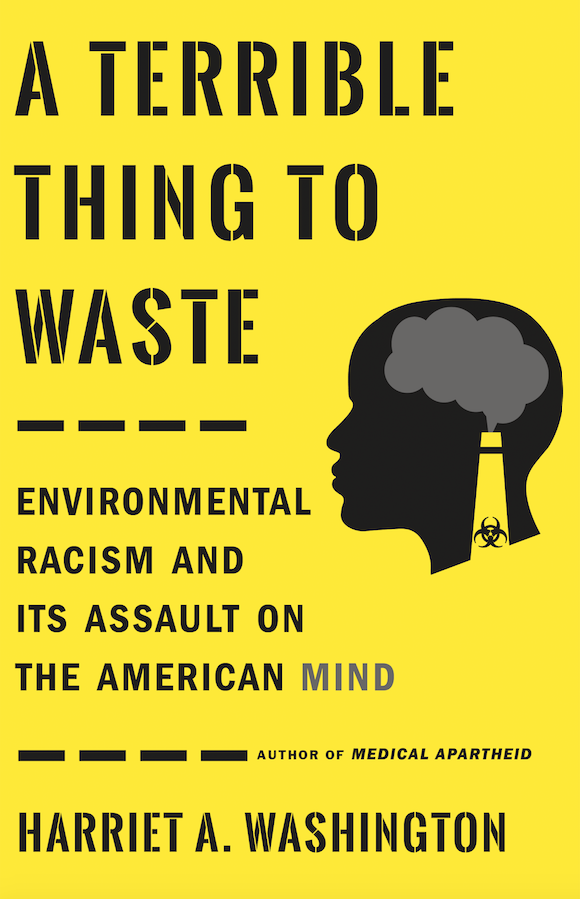 I think it might be almost impossible to tease out exactly how much we’re losing.

One of the things that we’re insufficiently attentive to is that people in these ethnic enclaves — people on the reservations, Hispanics and African Americans living in these fence-line communities or in urban settings — they’re suffering the most, but the whole country is suffering.

Bruce Lanphear [a physician and a professor in Health Sciences at Simon Fraser University] looked at what a drop in just 5 IQ points across the U.S. population would mean. And he found it would cut the number of gifted children in half and dramatically increase the number of mentally handicapped people.

We’re losing a great of deal of intelligence to lead, mercury, arsenic and industrial chemicals. Even pesticides that have been banned for 40 years, like DDT, are still showing up in children’s food. We’re basically operating in a sea — like a witch’s brew — of industrial chemicals that are poisonous and are weakening our cognition.

It’s really pervasive and we’ve quantified it enough to know that it’s a crisis.

With the environmental community there’s always more that can be done. But I think it’s really important to acknowledge the fact that we’re making strides and going in the right direction — as long as you exclude the EPA, which is doing much worse.

For a long time I thought of environmental groups as having good missions but very divergent from those of African American and Hispanic people because they were focused on things like preserving the wild and on recreational environmental issues — things that seem very tangential to saving the lives of people who are directly threatened by toxins.

But that has changed. I see their missions evolving and now they are also tackling some of these issues. I think it’s pretty common belief that the issues facing people of color, who are the worst victims of exposure to environmental toxins in this country, are separate from those of whites, but that’s not really true. As cognition in ethnic enclaves is affected, as their behaviors are affected by these poisons, it’s going to affect the entire country. So it’s a problem for all of us.

1 thought on “Intelligence Thieves: How Toxic Pollutants Are Robbing Communities of Color”