A new book tracks scientific research and restoration efforts around the world that are focused on saving this critical ocean ecosystem.

Juli Berwald’s love affair with coral began when she saw her first reef in college — and it changed her life. Mesmerized by the beauty of these underwater animals, she set out on a path to study marine biology, eventually earning a Ph.D.

But events took her away from the sea and ocean research. Living in landlocked Austin, Texas, she became a science writer. Years later, on a family trip to the Caribbean, she dipped beneath the surface of the water again. This time she wasn’t greeted by vibrant colors and teeming life but by the quiet horror of a dead reef.

All the news she’d read about bleaching reefs and the myriad environmental pressures facing coral came viscerally to life. The grief from that experience stayed with her — along with a renewed concern for the future of the world’s coral reefs.

She channeled all that into a new book, Life on the Rocks, about the search for solutions and the science that’s driving “nuggets of hope” even in the face of a grave prognosis for corals. Already three-quarters of the world’s reefs have been damaged by warming ocean waters. Climate change poses existential threats to corals, and so do other human activities.

The book is also firmly rooted in time. In the years that Berwald spent researching and writing, her own life was a bit on the rocks as well. The story of coral is interwoven with a narrative about Berwald’s daughter suffering from a mental illness, a global pandemic upending life around the world, and a nation erupting in outrage over the murder of George Floyd and ongoing violence against Black Americans.

Berwald at first hesitated to include all those threads, but realized that climate change, racial justice and health are firmly intertwined. And sometimes, she says, we forget that science isn’t separate from the rest of life. 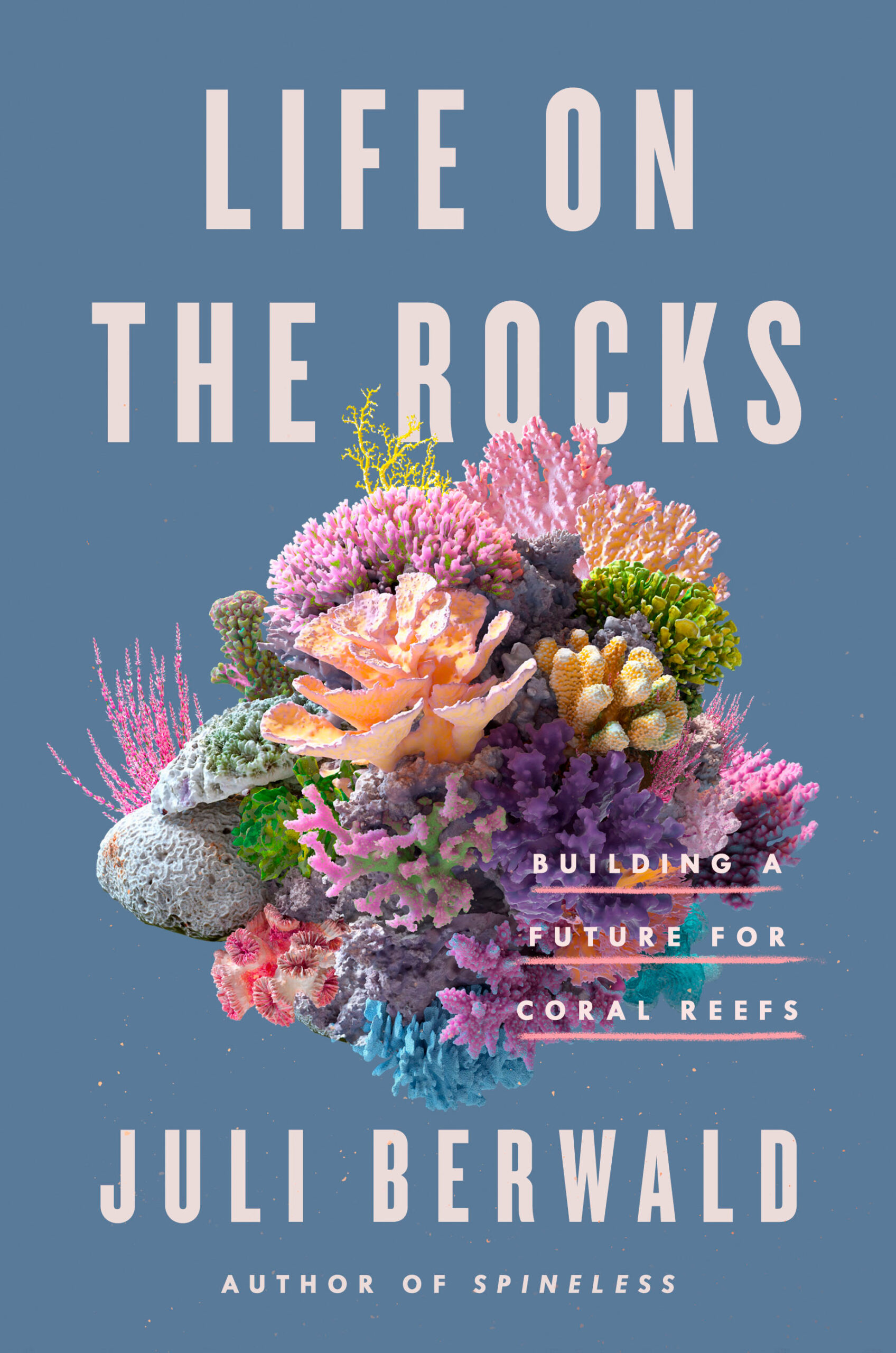 “Scientists are affected by sick children and political events, and I think we do a disservice to science when we don’t see it as part of what it is to be human,” she told The Revelator.

We talked to her about whether restoration efforts can be scaled, why the ocean needs an advertising agency, and what gives her hope.

You’ve been interested in ocean life for a long time. Why a book about coral and why now?

I grew up in the Midwest, and the first time I really realized there was an ocean on this planet was in college. I went to Israel and I was miserable with the program I was on. There was a marine ecology course offered for a week in the Red Sea, so I signed up on a lark.

When I put my head in the water for the first time and saw coral, I couldn’t believe we lived on the same planet with these animals. And these were animals that were building these forests, but they were like fairy lands. The incredible diversity of shape and form and texture I saw — it just changes you forever.

I fell in love with the ocean because of the coral. And then, of course, your career doesn’t always take you exactly where you want it to go. I thought I would study coral biomechanics because I was a math major, but that didn’t work out. I instead studied satellite imagery.

Sometimes you have to leave something behind in your life. And so I did. But then after my book Spineless, about jellyfish, came out in 2019, I’d sort of found an audience. I decided with a lot of trepidation that I needed to go back to the coral because it’s really the first great ecosystem on our planet that is threatened by climate change in a very critical and existential way.

I really wanted to go back and see how these animals — these great ecosystems that I first fell in love — are doing. What is the hope and what is the reality of what they’re up against?

What did you find are the biggest threats facing coral reefs?

Climate change is definitely number one on the list. If we don’t deal with climate change, the coral reefs have really big problems in front of them. It’s worth saying, though, that geneticists are finding incredible amounts of genetic diversity on the reef, and we don’t yet know how much that will allow them to adapt to this future warmer world.

Another big problem is water quality. Coral evolved in tropical waters where there aren’t a lot of nutrients. But once we started fertilizing land and having more people creating sanitation issues, there’s more nutrients in tropical places now and that’s hard for the coral to tolerate. It has led to a whole flurry of diseases that have knocked out a lot of coral.

The other thing that’s been really bad is overfishing and illegal fishing, which destabilizes ecosystems. But practices like blast fishing and cyanide fishing and just dragging nets and anchors over reefs can also physically damage reefs.

What is the role that algae play in coral reefs, and how is that changing with warming waters?

The reason that coral can exist and create these incredibly rich ecosystems in tropical places is because they form this amazing alliance with algae that live in their tissues. And those algae photosynthesize, and they feed up to 90% of the sugar that they make directly to the coral.

That gives coral this incredible power source, and with that they make the great limestone reefs everywhere.

But what happens is when the water temperature increases by a few degrees for a few weeks, that alliance breaks up. And that’s what bleaching is — the color of the coral comes from the algae, and without the algae the corals are just clear.

The question of why the alliance breaks up is a super-active area of research. We really don’t even know who throws the switch, which one goes first. Is it the coral kicking the algae out? Or is the algae saying, “See you, I don’t like being in this stressed animal”?

The cool thing is that it turns out the coral can make alliances with several different kinds of algae, and what the scientists are finding is that after bleaching sometimes a different species of algae will colonize the coral. And some of those species actually have higher thermal tolerances, so they can remain in the coral under hotter conditions. But some of these new algae are actually more selfish and they feed the coral less sugar. So there’s a lot of tradeoffs happening.

It could be that the coral can survive on these more limited energy supplies until we’re able to deal with climate change. It also may be that some coral can switch to these new algae and some can’t. There’s lots of possibilities, but it’s what scientists call a “nugget of hope.” It’s really an evolving story that’s fascinating.

You visited projects around the world focused on reef restoration. Which of those did you find particularly hopeful … and scalable?

The scalable issue is the hardest part because reefs are massive. The Great Barrier Reef is bigger than Italy. When we think about restoring a few acres, and you compare that to the size of Italy, you see what a massive issue it is.

But one place where I saw a lot of hope was in Indonesia with a project by Mars, the candy bar company. It’s right in the middle of the coral triangle, which is the place of the highest diversity of coral in the world. This is between the Philippines, Papua New Guinea and Indonesia. There’s about 400 or 500 species of coral that live in that region compared to in the Caribbean where there’s about 40.

The problem in this part of Indonesia is blast fishing, where fishermen, driven by poverty, use explosives to collect fish, and that destroys coral. Even though it’s illegal, I heard one or two bombs explode every time I dove. But Mars, which has chocolate factories there, wanted to do something to bring back the coral reefs in this region.

They came up with this really simple rebar structure that’s about as big as if you put your arms out in a circle. It has six legs on it and you tie broken pieces of corals to each of the legs in certain places. And then network a whole bunch of them, like 100 or 200 or 300 together underwater, and stake them down on these reefs that have become rubble.

Within 18 months the corals regrow, and within three years, you can’t even see the rebar structures at all. And it feels like a very vibrant, beautiful, intricate reef. The cost per coral planted is about $1 to $2. That’s a great number because you have to replant hundreds of thousands of corals in order to make a reef healthy.

Then they protect the coral and let them lay down their little baby skeletons and get big enough to have a better chance of survival once they put them on the reef. They’re able to replant tens of thousands at a time. Those projects are still ongoing, but hopefully that will help bulk up the amount of coral out there.

In the past we’ve sort of just looked at conservation in the ocean, like “let’s just protect regions and the ocean will come back.” But scientists have realized that coral are in such dire conditions, and it’s such a critical time for them, that we have to actively go out there and do things to make the reef more healthy [while efforts are ongoing to fight climate change].

At the same time coral scientists are actively looking for genetic strains that are more resilient to the thermal changes that are happening.

It seems there’s more reporting and concern now about climate change — at least as it concerns what’s happening on land. Is the story about what’s happening in the ocean being conveyed well enough?

I would say no. In the book one of the people who I follow is Richard Vevers, who’s in the documentary Chasing Coral, which follows the terrible coral bleachings in 2016 and 2017. He’s an advertising executive who started an advertising firm — the Ocean Agency — to get information to people about what’s happening to coral.

As I’ve followed him, I’ve seen his frustration at trying to get people to understand just how dire things are, and also how important coral is as an ecosystem. The numbers are stunning. A quarter of all marine species depend on coral at some point in their life. And between a half a billion and a billion people depend on coral ecosystems for their primary source of protein.

He gets so frustrated that some see coral as a lost cause already and throw up their hands. And that politicians are just not taking climate change as seriously as they should be. I recently spoke to him about the next [international global climate meeting] COP 27, which will be in Sharm El-Sheikh, Egypt. That’s on the edge of the coral reef where I first fell in love with corals.

These corals — their lives, their futures — will be decided just a few miles away up on land by people sitting in these convention halls. Richard wants to take the people from that meeting out onto this reef to say, “This is literally what’s at stake here.”

Vanishing: The Bleaching in My Backyard