Funding to forecast toxic algae blooms could be at risk, putting lakes and water supplies in danger.

On the broad metal deck of a small research boat, Rick Stumpf lowers a rope over the stern. It’s attached to a round metal disk, painted in alternating quarters of black and white.

“I’m out of practice,” he confesses, as he leans over the side.

Stumpf is an oceanographer with the National Oceanic and Atmospheric Administration’s National Center for Coastal Science.  But today his boat isn’t on an ocean, but on a bay in western Lake Erie.  And the instrument he’s using — a Secchi disk, invented in the Mediterranean in the 1860s — is a far cry from the technology he normally uses.

As he reels the device back into the boat, Stumpf explains that measuring how far down you can see the disk reveals a lot about water clarity.

“Right now it’s about 8 feet? And that means there’s not much sediment and not a lot of algae in the water.”

Algae has become a major focus of scientific research on Lake Erie. Since 2002 toxic algal blooms — more accurately known as cyanobacteria, an ancient life form that produces chlorophyll, but can also release deadly toxins — have been plaguing the lake’s shallow western basin.

In 2014 a massive harmful algal bloom overwhelmed the drinking water intake for the city of Toledo and sparked a nearly three-day shutdown of the city’s water system, when nearly half a million residents were warned not drink the water or even bathe in it.

That same year, Congress re-authorized and amended the Harmful Algal Bloom and Hypoxia Research and Control Act to include research on and response to blooms of freshwater cyanobacteria.  Stumpf says that legislation refocused NOAA’s mission in the Great Lakes.

And the research tools he uses these days are far more sophisticated than Secchi disks.

For more than eight years now, Stumpf has been tracking Lake Erie’s algal blooms from space.  Using satellite imagery detailed enough to spot high concentrations of chlorophyll — an indicator that harmful algae may be present — Stumpf has developed an early-warning system to alert residents to where blooms are and where they may develop.

To refine his Lake Erie forecasts, along with the satellite data gathered from both U.S. and European space agencies, Stumpf also draws on 30 years of water-quality data from Heidelberg University and regular water testing of the lake by federal and state agencies, universities, and even charter boat captains.

“We’re looking every day,” says Frey.  “Operators are checking the Lake Erie satellite imagery, to see where the blooms are.”

That’s why NOAA’s Stumpf and principle investigators from three other federal agencies are now trying to expand identification and assessment of harmful algal blooms nationwide.

The Cyanobacteria Assessment Network (CyAN) was launched in 2015 to develop an early-warning and assessment system for toxic algal blooms in lakes, reservoirs and recreational waters in the contiguous United States.  It’s a five-year inter-agency project with work from the NOAA, NASA, and the U.S. Geological Survey, all supporting the U.S. Environmental Protection Agency, the agency with lead authority for freshwater systems.

“We were already doing pieces of this work as part of our core mission,” says Keith Loftin, the principle CyAN investigator for the USGS, who is also doing work on algae toxins at his Lawrence, Kansas lab.  “So were all of the other agencies.  It’s everybody working together to solve a problem.”

One way researchers will do that is by comparing a 10-year archive of national satellite imagery with what they’re seeing now, to see how fresh water toxic algal blooms have changed over time.  A preliminary study in Florida, Ohio and California has already demonstrated that in each region algal blooms have behaved differently, with some shrinking, some expanding and some staying the same.

A recent study by the Carnegie Institution for Science at Stanford University seems to indicate that climate change may play a role in the apparent increase in harmful blooms, due to increased rainfall that washes pollutants into freshwater lakes.

But Loftin says there’s still not enough data to be able to say with certainty that algal blooms are increasing in all parts of the country.  He hopes that ongoing monitoring of satellite and field data under the CyAN project will eventually provide an answer to that question.

“Trends assessment and monitoring are vital,” he says. “We can’t answer questions about trends without that.”

In the meantime, Stumpf says, CyAN aims to assist states across the country dealing with harmful algae by providing a database of easy-to-understand satellite data that can alert them to local blooms, and help them figure out strategies to reduce their threat — and their possible sources.

“Our basic format, just for the imagery, will at face value look like a picture.  It’ll be colored, but it will actually have data and be geo-referenced,” says Stumpf.  “It might be tables where they can go in and say, well, here’s the number for this year and that year.  That’s the whole goal of doing it. So they don’t have to be an expert.”

Accessing those science findings may also be made easier by a GIS mobile app now in development by the EPA.

But there’s a problem that could stand in the project’s way: the future of funding for these federal agencies and their freshwater work.

Earlier this year, President Trump recommended a 31 percent budget cut to the EPA. In June the House Appropriations Committee approved a bill that would shave a more moderate amount — 6.5 percent — off the EPA budget. The Senate has yet to vote.

It’s unclear whether proposed cuts to the EPA could impact the agency’s Safe and Sustainable Water Resources Research Program, through which it funds CyAN.

NASA also funds CyAN through an inter-agency agreement set to expire at the end of FY 2018.  A statement from the agency says NASA is still planning to meet its 2018 commitment.

A spokesman for the USGS says are no proposed cuts to its 2018 budget that would affect the agency’s work on the CyAN project in either the White House budget proposal or the House budget plan, although the Senate has yet to weigh in.

And Steve Thur — acting director and permanent deputy director of NOAA’s National Centers for Coastal Ocean Science — says if Congress passes the proposed 2018 White House appropriation for his agency, he’ll be able to continue funding work on CyAN next year.

But none of the four federal agencies can be sure of funding for 2019, the final year of the CyAN project’s work.  That uncertainty is complicated by renewal of the Harmful Algal Bloom and Hypoxia Research and Control Act, slated for Congressional re-authorization next year.

“I think we’re in a game of wait-and-see at the moment,” says Thur.  “We’ve got funding for the current operations for the CyAN project right now and so we’ll wait and see what comes of that.”

In the meantime, scientists like the USGS’s Loftin and NOAA’s Stumpf are determined to get on with the work and ignore national politics.

But NOAA’s Thur says federal funding directives from the White House could still possibly eliminate some of the local programs NOAA now hopes to take nationally. “There were proposals in the president’s request for FY 2018, under multiple budget lines, that would potentially impact our ability to produce the forecasts,” he says.

What Thur is referring to are the bi-weekly harmful algal bloom forecasts upon which Lake Erie water resource managers like Kelly Frey have been relying for years.

And if those forecasts are eliminated because of budget cuts, Frey and others wonder what will happen to the larger effort to safeguard the nation’s drinking water. 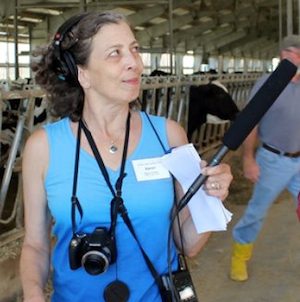 is a veteran freelance public radio journalist whose work has appeared on NPR, Marketplace, the CBC and the BBC, as well as on regional stations throughout the Great Lakes basin. For the last 18 years, she has focused much of her work on Lake Erie issues.