A new book explains why “Slow Water” projects can help us tackle our climate, water and biodiversity crises.

The world got a reminder of the beauty and importance of going slowly with the advent of the Slow Food movement that kicked off in Italy in the 1980s and spread throughout the world. Ditching fast food for locally sourced meals comes with myriad benefits for people and the planet.

The same can be said for embracing slow water, although the concept hasn’t achieved the same international recognition just yet. As we face a future of climate worsened droughts and floods, of continuing water pollution and crashing biodiversity, rethinking our relationship to water is central to thriving — and even surviving.

Science journalist Erica Gies found that many innovative projects working to solve our most challenging water problems all have a central premise in common: slowing water down. She explains how that’s done in her new book Water Always Wins: Thriving in an Age of Drought and Deluge (available to U.S. readers in June), which tracks the work of “water detectives” enacting these changes across the world.

The Revelator spoke with Gies about what’s required to make Slow Water projects successful, who benefits, and why we’ll need to rethink more than just our engineering.

What does Slow Water mean?

In our attempt to control water we’re often trying to eradicate the slow phases and move it a lot more quickly. We’re putting up levees so that it won’t settle on floodplains. We’re filling in wetlands so that we can build or farm on top of them. We’re cutting down mountain forests that act as water towers, generating water and releasing it slowly.

In all of the cases I looked at, the water detectives were trying to give water access to its slow phases again, whether that meant restoring or protecting wetlands, or reclaiming floodplains, or protecting wet meadows, or in a city, creating something like bioswales.

Slow Water is really giving water access to its slow places as much as possible within our human habitat or near our human habitat. It’s thinking of water as an entity with its own agency. It’s systems thinking.

How do we begin to do this? It seems like it’s about more than just changing engineering.

There’s a kind of a fundamental attitude shift behind the concept of Slow Water, which is instead of having this sort of hubris or human supremacist attitude, the water detectives are looking at water as an entity that has its own relationship with rocks, microbes, beavers and humans across the ages.

That idea is very common in many Indigenous cultures around the world. That’s why you hear water protectors say things like “water is life.” Some people will talk about water as a relative, as a grandmother. That kind of attitude has a real strength when it comes to interacting with water, because water is part of a very complex system. There’s the water cycle, of course, but also all of these relationships with the different ecosystems and animals, including us.

The problem with our control-of-water mindset is that we’re often focused on single-minded problem solving. If we live in a dry area and we want to have water for later, we build a dam and a big reservoir. Or if we want to stop a town from flooding, we build a levee.

But if you’re only focused on solving that one problem, you’re not considering the system in which it works. And that’s why you have a lot of these unintended consequences, like building a levee that then pushes the water to another community nearby that doesn’t have a levee. And dams are an environmental justice issue as well.

It’s also very place-specific. This isn’t a solution that you want to scale up and stamp out in a real cookie-cutter kind of way. There are definitely commonalities in different projects, but every single place is unique in its hydrology, its ecology, its rocks, its people, and what its people need.

Slow Water projects are bespoke and, ideally, they’re local. They are more like [distributed] renewable energy — like solar panels on everybody’s roof where a lot of panels add up to a meaningful amount of electricity.

You traveled all over the world for this book. What common threads did you see? 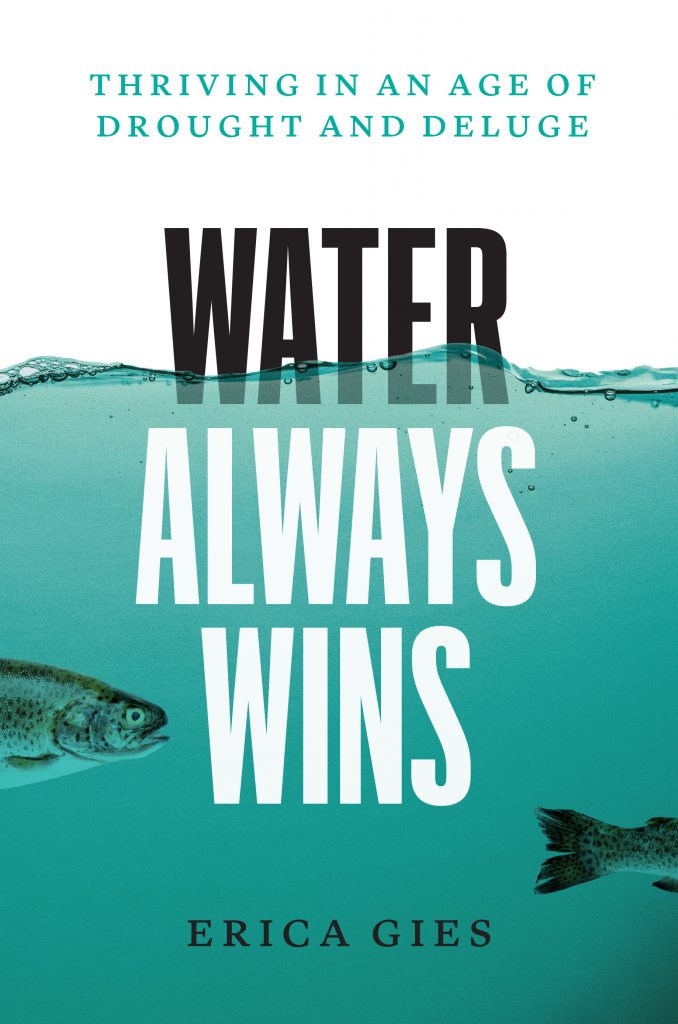 I think the common thread is that you have to try to understand water rather than just try to make water do what you want it to do. You have to understand what water was doing before we dramatically altered the landscape. What is water likely to want to continue to do?

And how can we accommodate that within this landscape?

One of the places I talk about is Chennai, which is on the southeast coast of India. The people who live there are Tamils. They have this incredibly innovative water system that they’ve been doing for at least 2,000 years. But in the last 40-50 years, they’ve really gone down the kind of mainstream development path, as their city has expanded massively.

They have three rivers that go through the city and wetlands, backwaters, salt marshes and a whole series of human-built ponds that were relics of the great Tamil water infrastructure. But as they expanded, they built over many of those, and the city has begun to flood more and more regularly.

I was there in December and there was a small rainstorm and it immediately started flooding. During monsoon season there is nowhere for the water to go. But like us, their impulse now is to move water away — we can’t have it lingering here. We can’t have it flooding.

That’s created another problem. After the monsoon season is a long dry season when they need water. Now they’re drilling lots of groundwater and their groundwater is dropping and they’re talking about building really expensive desalination. But Chennai actually gets one and a half times the amount of water it needs via the rain. It’s going to these extreme lengths to get more water when it doesn’t need to.

What are the ways in which plants and animals can benefit from Slow Water projects?

The biodiversity question is critical, and it comes back to systems theory. The thing about Slow Water projects is, if you’re doing it right, you’re restoring or recreating or mimicking to some degree a healthy ecosystem that’s doing all of the nutrient and pollution and food cycling that healthy ecosystems do. And what you need, to do all that, is critters and plants.

We’ve altered 75% of the world’s land area. That’s one of the reasons why we’re having a biodiversity crisis. There’s a lot less habitat for all of these critters. I believe it’s a moral issue that we continue to coexist with other creatures, but there is also a self-interest angle to it. The more that we can do to help restore these ecosystems that modulate the water cycle, the more we also have space for these critters. And then we also need these critters to perform the work of modulating the water cycle.

I go into that in some detail where I talk about the hyporheic zone, which is an area that’s not groundwater and not surface water. It’s an ecotone that’s in between and has a lot of unique critters. It’s a lot like our human gut microbiome. If we don’t have healthy collections of microbes, then we suffer from various illnesses. It’s very much the same with waterways. So that biodiversity is really a fundamental piece.

The main focus of the book is how Slow Water projects can be an adaptation measure to help buffer human communities from floods and droughts. But in fact, because these are whole systems, there’s also a lot of “blue carbon.” Wetlands store incredible amounts of carbon, as do peatlands and high-altitude forests. So they are also a mitigation measure.

Maybe we’re not going to measure exactly the amount of carbon that’s stored in this complex system. But maybe we don’t have to. Maybe we can say, “Look, our city’s not flooding, and our stream is running in the summer, even though we’re in the dry west.” Maybe that’s a good enough sign that this investment has been worth it.

What can people do to get engaged in this work?

As people see floods or droughts in their backyards, they’re beginning to understand that climate change is water change.

But the really empowering thing about Slow Water is that there are things that you can do to protect yourself from flood and drought as a city, as a region, as a watershed. It’s not easy, right?

You have to cooperate with people, you have to share a vision. But people are doing it. I think that’s a really hopeful message. Water is local and there are things that you can do locally to have a much better relationship with water.