A recent meeting by the Orca Recovery Task Force shows the massive political and economic lobbies that stand in the way of success.

As I write this on October 3, I’m listening to members of J pod of Southern Resident killer whales calling to one another off the west side of San Juan Island. The calls, heard over the Lime Kiln hydrophones, are clear and crisp and so familiar. They’re the signature J pod S-1 calls, including a variety of chirps, honks and sounds like squeaky doors. The thumping rumble of a freighter overwhelms the calls for a few minutes, but eventually sweet orca voices once again pierce the static. All too soon the whales move out of range.

They came in from the Pacific overnight, appearing in Haro Strait along San Juan Island. We fervently hope they’re finding the food they need and can eat — mainly Chinook salmon — but we know not many salmon are in the Salish Sea this year.

Over the past dozen or so years the three pods of these genetically and geographically isolated whales have gotten thinner and thinner. Some have weakened and died when the fish aren’t there in sufficient numbers. And we know that due to starvation and high levels of toxic chemicals like PCBs, 70 to 80 percent of their pregnancies in recent years have ended in miscarriages and early neonate mortality.

Now at only 74 family members, with no surviving offspring since 2015, the Southern Residents are on a precipice, tipping precariously into reproductive extinction. Some may survive for a few more decades, but viable new births will not match deaths, and soon all the survivors will be post-reproductive.

These orcas have been in the public eye more than ever lately. In early August a whale we call J35 or Tahlequah carried her deceased baby for 17 days in a tour of grief that was broadcast worldwide for weeks. This was followed immediately by the visible demise of J50/Scarlet, not yet four years old, once an acrobatic youngster who wasted into skin and bones before expiring and drifting to the bottom.

Although new to many people, the problems for these whales began many years ago. The warnings have been flashing red since the late 1990s, when 20 percent of this cohesive orca community died in just five years, at a rate tightly correlated with an extreme El Niño over the North Pacific that decimated already scarce Chinook populations. The sudden mortalities triggered the orcas’ “endangered” listing by federal and state agencies a few years later. This helped to fund field studies and confirm that Southern Residents depend on viable Chinook runs. Not much was ever actually done at state or federal levels to restore salmon runs, although local and regional habitat restoration projects have continued to repair countless rivers, shorelines and estuaries to help salmon survive.

One of the most anticipated measures came in March of this year, when Washington state Gov. Jay Inslee declared an executive order to marshal Washington’s resolve to help the orcas. The order created the Orca Recovery Task Force to focus on how to recover this dwindling orca clan. About four dozen people joined the task force, representing a range of diverse interests — commercial, governmental, tribal, scientific and environmental.

Many expected that task force to take an immediate role. As J35 grieved and J50 weakened and died before a world audience, Gov. Inslee was deluged with calls and letters about the urgent need and easy feasibility of breaching the four lower Snake River dams, which I and many other experts feel is the best and quickest way to provide the most Chinook for Southern Residents. In late August the governor sent a note asking his task force to consider dam removal, although only one member had ever mentioned dam breaching prior to that.

Public pressure continued to mount to breach the dams, and it was finally mentioned at a task force meeting on August 28.

But at the same time a complex web of pro-dam public-relations messaging arose to counter the public sentiment. The messages say there are plenty of salmon; that dam removal is unnecessary and uneconomical; and that it’s impossible any time soon anyway, as dam removal is blocked by unbending bureaucratic hurdles.

This wasn’t a new tactic. Even before this, Washington Congresswoman Cathy McMorris Rodgers had taken this pro-dam messaging to the legislature. This past April she sponsored House Bill 3144, which would forbid even studying the four dams’ removal. The bill, dubbed by critics the “salmon extinction act,” is currently stalled in the Senate, but the message was reinforced when another representative held a hearing in Pasco, Wash., on September 8 that was dominated by testimony claiming economic benefits provided by the dams. Similar messages appeared in blogs and articles authored by the pro-dam lobby.

All this obfuscation, and luckily also some facts, came out most recently in a 2-hour webinar held by the task force on September 27 to address potentially undamming the lower Snake River. On the panel were representatives from a long list of government, environmental and energy organizations and agencies.

For the most part, the participants shared reasons not to remove the dams, often using scientifically questionable information. Among the highlights:

There were also some, although fewer, comments in support of breaching the dams:

What comes next? The Orca Task Force is drafting its recommendations to Gov. Inslee, but the options to date seem to perpetuate some of the misleading points heard in the webinar, such as creating a stakeholders’ forum to discuss removal of the dams; asking the Army Corp to stop operating the dams and seek authority they don’t actually need to breach the dams; developing mitigations for stakeholders; and funding hatcheries. Another suggestion is for Gov. Inslee to issue an executive order in favor of Lower Snake River dam removal and replacement with carbon-free alternatives (a trend that’s already happening).

Regardless of how those draft recommendations shake out, the governor’s job now is to sort out the static by federal agencies and lobbyists to see the reliable information from mostly regional organizations, and choose the best path toward orca recovery and sustainability. The governor may find it awkward to act against the wishes and words of the Army Corps, BPA, NOAA and the formidable commercial and political lobbies to breach those dams, but all evidence continues to show that it must be done — and soon.

J, K and L pod orcas will likely flicker into the night if he doesn’t. 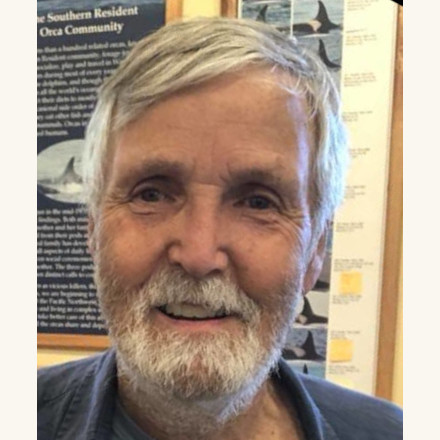 began working as field researcher with the Center for Whale Research on San Juan Island in 1981. He and his wife Susan Berta founded Orca Network in 2001, based on Whidbey Island, Washington.
http://www.orcanetwork.org/

4 thoughts on “What Would It Take to Save Southern Resident Killer Whales From Extinction?”