A new book from veteran author Mark Kurlansky explains why helping to save salmon is one of the best things we can do for ourselves and the planet.

If you want to know how well the environment is faring these days, look to the fish. Especially salmon.

“Our greatest assaults on the environment are visible in salmon,” writes author Mark Kurlansky in his new book, Salmon: A Fish, the Earth and the History of Their Common Fate.

Following decades of environment abuses, salmon populations in many places, especially the Atlantic, are in dire shape. Some Pacific runs have disappeared, too, and most populations are greatly reduced. Farmed salmon now outnumber wild ones.

How did we get here?

Kurlansky takes readers on a long historical trip to communities throughout the northern half of the world — anywhere you can or could find salmon — to understand how the fish went from ubiquitous to imperiled. Along the way he reveals the role of salmon in historical and contemporary indigenous communities, the destructive march of industrialization, the complicated role of hatcheries, and the growing threat of climate change.

“Human inventiveness keeps proving inadequate for replacing the natural order,” he sums up.

Salmon, Kurlansky’s 33rd book, is part natural history and part cultural history — there are even a few recipes. And it’s reminiscent of some of his previous hits including, Milk!: A 10,000-Year Food Fracas and Salt: A World History.

The Revelator recently spoke to Kurlansky about the threats to salmon, why we don’t seem to learn from our mistakes, and the life history of what he calls these “extraordinarily poetic” fish. 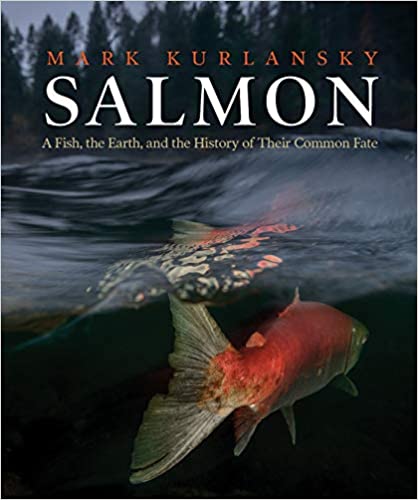 Why did you want to tell this story about salmon?

In 1997 I wrote a book about cod and it happened to be about the time that the northern cod stocks collapsed and people started really thinking about fishery management and overfishing. I worked on commercial fishing boats in the 1960s and that’s all anybody was talking about then, but by the 1990s the general public was [finally] thinking about it, too.

I have continued to watch what’s going on with fisheries and I’ve realized that [focusing on] overfishing doesn’t come close to covering the problems that we’re actually facing. I thought that salmon was an ideal fish to make that point, because as an anadromous fish that lives in freshwater and at sea it’s destroyed by everything we do to the oceans and everything we do to the land.

What are the biggest threats facing salmon today?

There’s a lot of places — most of the North Atlantic — where there’s no more commercial fishing of Atlantic salmon. And yet the stocks still keep declining. One of the reasons for this is that salmon are born in the rivers and they reach a certain size and they go out to sea. They gain 95% of their size when they’re at sea by eating voraciously.

And what people have been telling me all over the North Atlantic — in New England and Scotland and Norway — is that the salmon that go to sea just aren’t coming back at the same rate they used to. When scientists look into this, they discover that the ocean is losing its carrying capacity — its ability to feed the animals that live in the ocean.

In more than 40 years of writing about this sort of thing, it’s the scariest thing I’ve ever learned.

If the oceans can’t feed the fish, we’re really sunk. And this is due to climate change.

Before climate change was a threat to salmon, you document, there was a long history of salmon getting in the way of “progress.”

The British destroyed their rivers by damming them to get power for mills. And then the mills dumped pollution until the rivers were completely dead. And then people of British origin did the exact same thing in New England. And then it was New Englanders who went to the Pacific Northwest and built all these dams to make it an energy-based economy.

And while I was researching this, I was thinking, “Why don’t people ever learn?” And then I realized it’s because they don’t think they’re doing anything wrong. The British were out to create the greatest power of the industrial revolution. And they succeeded. And in New England, they succeeded in creating the greatest industrial center of North America. And in the Pacific Northwest, they took a place with very little economic activity and turned it into this powerhouse.

And so, what you really learn from all of this is that the whole problem is our concept of economic development.

You write a lot about the life history of salmon, and how adaptable they are. Does that give them a better chance of survival?

They are really one of the most astounding, beautiful animals in the kingdom. They can jump 10, 11 feet in the air, which in comparison to their size would be like a human being jumping 50 feet. They can swim faster than an automobile. They will journey thousands of miles back to find not only the river of their birth, but the exact spot in the river where they were born.

They are voracious eaters in the ocean, but when they enter the river, they stop eating. If they didn’t, they’d just clean out the river. So nature dealt with that by having them just stop eating and they live off the fat and the energy that they got out at sea. They give everything they have to get up this river, no matter the current or waterfalls. Then they get there, and they reproduce, and they have nothing left and they die.

Their life history is extraordinarily poetic.

The challenges you document in the book are substantial. Are there reasons to be optimistic about the future of salmon?

Yes. Farmers have become more aware of harmful practices. People have become more cautious about the use of pesticides. And I don’t think the argument flies anymore that we should build more dams because it’s better than fossil fuels. Dams can be torn down and replaced with alternative energy.

People are becoming aware of these things. There have been polls in the Pacific Northwest that show that the population thought it was more important to preserve salmon in the Columbia River than to have industrial development. And people in Northern California want their salmon back and are doing things about it, including taking down dams.

But of course, you can’t just tear down the dams and let the salmon in and expect everything will be fine. You also have to clean up the river and then you’d have to rebuild the river because the dams have completely misconfigured it. You have to bring back an environment that a wild salmon will live in.

That reminds me of a line in your book where you write, “If salmon doesn’t survive, there’s little hope for the survival of the planet.”

Yeah, or the other way you can look at it is: If you want to save salmon, all you have to do is save the planet.