Journalist Christopher Ketcham explains why we’re running out of time to save the West’s public lands and wildlife.

If you’re a lover of wilderness, wildlife, the American West and the public lands on which they all depend, then journalist Christopher Ketcham’s new book is required — if depressing — reading.

In This Land: How Cowboys, Capitalism and Corruption Are Ruining the American West, Ketcham weaves together 10 years of reporting and decades of adventuring in the West into a deeply political and deeply personal call to save the West’s public lands.

“It is still possible in this country to find wild, clean, open spaces, where the rhythms of the natural world go on as they should, relatively undisturbed by industrial man,” he writes. “I fear the opportunity, though, could disappear in our lifetime.” 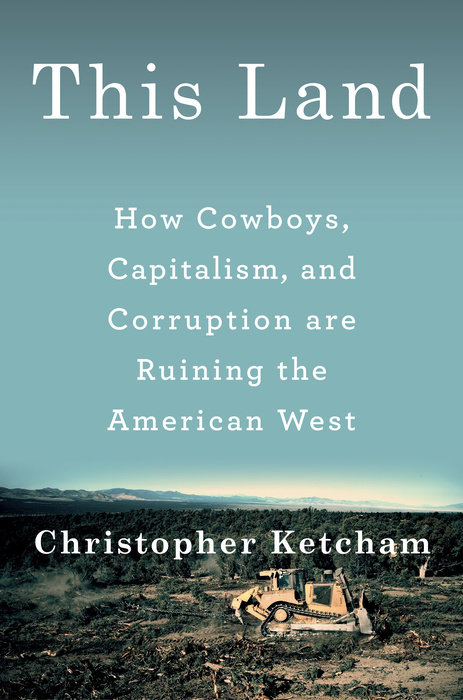 And the reason is pretty simple: Government agencies tasked with protecting our lands have failed. But how this happened is complex and has taken decades to unfold, as he explains. “The private interests that want the land for profit have planted their teeth in the government,” he writes. “The national trend is against the preservation of the commons. Huge stretches are effectively privatized, public in name only.”

This is clear in Escalante, Utah — home to Grand Staircase-Escalante National Monument — a crucial battleground in the fight over public lands. Ketcham writes about the biggest scourge on public lands there and across the West: cattle.

“Grazing is today the most widespread single use of the public domain, occurring on 270 million acres of national forest and BLM land,” he writes. The grazing of privately owned cattle on public lands has polluted streams, decimated native plants, and turned a biologically diverse ecosystem into a monoculture of grassland.

But in areas where cows have been removed, wildlife has returned with great abundance. Raptors and songbird populations jumped 350 percent after eight years without cattle, according to one study he cites.

That’s only possible if we take drastic steps. “How can you preserve a wild and unspoiled landscape with a ruinous alien bovine on it?” he asks. “You can’t. It’s an impossibility, an absurdity.”

And this gets at one of the book’s key points: Government agencies like the Bureau of Land Management and the Forest Service manage for “multiple uses,” which includes logging, mining, grazing and drilling — activities that are at their core incompatible with conservation and wildlife protection. “The BLM and Forest Service are schizoid,” Ketcham writes. “With one hand they protect; with the other they ravage.”

While grazing gets a lot of ink and ire from Ketcham, he also writes about the harm from roadbuilding. We now have 400,000 miles of roads through our national forests, facilitating the profits of private companies from oil and gas drilling, timber sales and other extractions. “Roading was the means by which all other industrial development could proceed, the crucial first step in the domination of the wild,” he writes.

Ketcham also explores the role of Wildlife Services, the USDA program that uses “an arsenal of poisons, traps, and aerial gunships at a cost of tens of millions of dollars annually” to kill wildlife perceived as a threat to ranchers. “During the twentieth century, the agency was probably responsible for the deaths of tens of millions of animals,” he writes, “…including twenty species of carnivores and twelve taxa of mammals listed as endangered, threatened, or as candidates for protection under the Endangered Species Act.”

It’s not just Wildlife Services failing endangered species, of course: Ketcham writes about the government-industry collusion that has betrayed the grizzly bear and sage grouse, among other species.

While the Trump administration’s anti-environment agenda has ramped up some threats, including slashing vast amounts of protected public lands, the wheels of this machine were set in motion long ago and supported by both Democratic and Republican administrations. It was Obama’s administration, he writes, that “perpetrated the worst offenses, removing protections for some of the most charismatic species in the West, the veritable last vestiges of the wild West. In so doing, it was Democrats who set up for evisceration the Endangered Species Act, a law crucially important for the future of biodiversity on the public lands.”

So-called “Big Green” groups, those large national environmental nonprofits that get most of the money and media, also take considerable fire from Ketcham for their willingness to compromise away environmental protections and countless acres of wilderness, like with the 2014 Rocky Mountain Front legislation, which was celebrated for creating 67,000 acres of new wilderness south of Glacier National Park, but opened up 200,000 acres of roadless areas to industry.

If there’s any failure in Ketcham’s well-researched and engaging prose, it’s that it’s 400 pages of brutally bad news. And it’s hard to know what to do with it all, which he readily admits.

“Sometimes I’m glad my job as an investigative reporter is mainly to lay demolitions under corrupt structures, blow them up, walk away, and let you people deal with the rubble,” he writes. “I’m no policy wonk. Frankly I have no idea how to save the public lands from a system that marches on inexorably, not in a way that’s politically doable in the near term.”

He does have a few thoughts, though, and calls for ending the federal timber sale program, beginning a vast decommissioning of roads, and what he calls the “single most important action we could take for the public lands, for wild plants and wild animals” — evicting cattle.

And while there’s no grand plan for how we save our public lands, he does present a clear case for why they’re under assault, who’s responsible and what’s at stake. And there’s a rousing call to action.

“What’s needed is a campaign for the public lands that is vital, fierce, impassioned, sometimes dangerous, without hypocrisy, that stands against the tyranny of money, coupled with a campaign of public education that explains in the simplest terms what the lands are, the glorious extent of them, the ecosystems they encompass, the wild things that live in them,” Ketcham writes. “We need to bring the good news to every citizen, the news that he or she has a say in what happens on the public lands. This land is our land.”

Killing as a Government Service

Up in Arms: New Book Explores the Bundys, Militias and the Battle Over Public Lands