Dozens of these water-filtering species are at risk of vanishing, and that’s bad news for every living creature that relies on them.

Give Rachel Mair two tanks of water and she’ll show you something amazing.

“When I do outreach at a festival, I put mud and algae and stuff in the tanks,” says Mair, a biologist with the Harrison Lake National Fish Hatchery in Charles City, Va. “Then I put some freshwater mussels in one tank and tell people to come back and check on me in a few hours.”

Those few hours make a difference, as do the mussels. “People come back and the water in the tank that has the mussels will be substantially cleaner,” Mair says. “I say, which water you rather your kids play in or drink? That’s what mussels are doing for you.”

Unfortunately, despite the service they provide to our rivers and streams, North America’s freshwater mussels now need some conservation muscle. Pretty much wherever they’re found, the shelled bivalves are disappearing. Many of the 300-plus mussel species in the United States have already been added to the endangered species list; many more are waiting for similar protection. Beautiful species with crazy names like the orangefoot pimpleback, purple bean, Higgins eye pearlymussel and pink mucket could soon be a thing of the past.

In part that’s because the very water the mussels filter through their bodies has also often become dangerous to them. “A lot of our streams are not as clear as they once were,” Mair says. “With all of the factories and discharges and agriculture and increases in human population, there’s a lot of pressure on our freshwater mussels.”

Scientists don’t always know exactly what levels of contaminants, such as ammonia, affect which mussel species, but we do know is that it doesn’t always take much. “They’re really very sensitive animals,” says Mair. “They’re the canary in the coal mine for our freshwater resources — the first thing to start disappearing when you have water-quality issues.”

Mussels also depend on something else that’s often in short supply in many streams — fish. You see, most mussel species can’t reproduce without assistance. In order to create the next generation, adult mussels lure in nearby fish — often using fleshy appendages camouflaged to look like fish food — then inject them full of larvae (glochidia) and let the fish carry the young’uns around until they’re old enough and big enough to go back into the water and survive on their own.

The important thing here is that not just any fish will do. Most mussel species partake of this parasitic relationship with just a handful of fish species; others rely on only one kind of fish. Unfortunately, thanks to river dams, pollution, habitat loss and other factors, those fish often aren’t available to mussels anymore. This has left all too many mussel species with limited or nonexistent means of reproduction.

Figuring out how to keep all of these endangered mussels from going extinct is no easy task. “There’s 300 species in North America,” Mair says. “They’re not easy to study. They all need a host fish. They all have different life-history aspects and different water-quality parameters that they can survive in. So you have 300 species that have 300 different needs, and we often don’t know what those needs are.”

Beyond biology, the species also face unique environmental challenges. “It’s certainly harder to clean up rivers than it is to clean up the land,” Mair says. “We can see what’s happening in the land and air. We don’t always see what’s happening in the rivers. We don’t know if our water quality is bad until we can go out there and physically test it.”

Even then, it’s not always easy to pinpoint — let alone resolve — whatever factors might be affecting water clarity. “I mean, you’re talking about thousands of acres,” she says. “Whatever is happening on those thousands of acres, it’s going to be affecting that one stream where that one mussel species lives. These are things that are out of our ability, especially as biologists, to change. You know, I can’t fix the water quality.”

Pollution is bad enough. What comes next might be even worse for mussels. “We’re coming into drought, climate change, water temperatures warming up — there are a lot of other things at play,” she says. 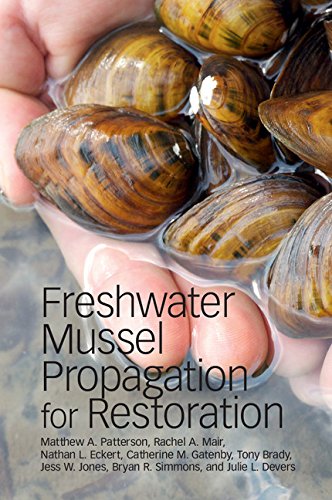 That’s not stopping people, though. More and more scientists are looking into how to breed mussels in captivity. Many of them are learning their craft from experts like Mair, who is one of the co-authors of a just-released book, Freshwater Mussel Propagation for Restoration (Cambridge University Press, March 2018). “There are so many people now that are starting to produce mussels,” she says. “My hope is that this book at least sends them on the right track.”

Mair adds that she knows the need for this knowledge base exists. “We teach a propagation class every year at the National Conservation Training Center in West Virginia, and every year we have a full class.” People also contact her year-round. “I get questions all the time. ‘I’m starting to grow mussels, how do I do this and do that?’ Nobody needs to start out at point zero. There are a lot of people out there that have been doing it, and I guess that’s my take-home message: Just contact somebody to help you and get you started.”

Of course, some of these mussel species are so rare now that managing to find a male and a female and bringing them together with the right host fish feels daunting, if not next to impossible. On the other hand, a handful of individuals and a few fish could help put a species back on the right track. “If you get one larvae infestation, you could get a thousand juveniles,” Mair says. “After they got big enough you could potentially put 500 back in the river. That could be incredible. I think a lot of people are looking to propagation right now because it’s the last strategy in a lot of cases.”

It’s easy to see the potential for a cleaner system of waterways if mussels returned to more American rivers and streams. Some places are actually already deploying mussels specifically to help purify the water. “A large bed of mussels could filter millions of gallons of water a day,” Mair says. “That’s pretty huge.”

There’s another reason to support your local mussels: “They are really just amazing,” says Mair. She describes one critically endangered species, the birdwing pearlymussel, which employs the greenside darter as its host fish. “This mussel has a lure it sticks out that looks like a snail, with fake antennae,” she says. The darter, in turn, loves to eat snails and has a specialized mouth designed to suck the meat right out of a shell. The mussel takes advantage of that. When a fish clamps down on the lure looking for a bite to eat, it gets a face full of mussel larvae instead. And the circle of life continues.

That’s just one out of many evolutionary marvels Mair recounts, each species description more excited than the last. And that, she says, is why mussels matter. “Yes, they clean water and that’s really important. But for me, they’re just so interesting, so unique, and that diversity is what makes nature great. I would hate to lose that.”