Removing dams is one thing, but thousands of levees also restrict rivers in the United States — and they’re not working as intended.

A female duck rests in the water where Gibbons Creek meets the Columbia River in southwest Washington. The common merganser grooms her rust-colored head in a site that, until recently, didn’t flow freely. But now the fish ladder that blocked salmon from spawning for decades is gone, and so is the levee that had held the Columbia back from spilling onto its historic floodplain since 1966.

In the largest restoration project on the lower Columbia River, crews spent nearly two years removing 2.2 miles of levee, reconfiguring Gibbons Creek, and realigning two new levees at Steigerwald Lake National Wildlife Refuge. The new levees — which total 1.6 miles and serve as public trails — reconnect the river to 965 acres of floodplain. They sit perpendicular to the Columbia, rather than lining its banks, giving the river and Gibbons Creek room to flow messily across the refuge, which is located just east of Vancouver and northeast of Portland.

The project has already benefited local wildlife — and not just the ducks. Soon after the levee was removed last summer an American dipper visited the refuge for the first time. Salmon returned to spawn last fall in an unfettered Gibbons Creek.

“It’s a big chunk of new floodplain,” says Chris Collins of the Lower Columbia Estuary Partnership, a nonprofit that worked on the $31 million project. “But it’s also in a part of the river that’s important to try to reestablish what we can.”

Just upriver, where steep basalt cliffs border the water, migrating salmon have few places to rest and eat. Downriver, miles of levees line the Columbia’s banks from Portland to Astoria.

And the refuge is not alone.

Steigerwald Lake is among dozens of projects in the Northwest where levees have been realigned or moved back to give rivers room to meander unconfined by the artificial walls that have tightly lined their banks and transformed ecosystems since Europeans arrived. As debates continue around removing dams to restore salmon runs, experts say levee removals and setbacks help threatened and endangered species, among other ecological and community benefits.

Although similar projects nationwide are few, Northwest tribes, nonprofits and government agencies have been buying land, acre-by-acre, to piece together restored floodplains.

Despite many successes, these projects often face political barriers and involve costly and time-consuming private land acquisition, pitting agriculture and development against conservation.

Levees built throughout the 1800s and 1900s along the country’s major rivers blocked rivers from their floodplains and turned the ecosystems into farms or neighborhoods. Prior to levees, the once vast landscapes were messy, complex and full of food for birds, fish and invertebrates. Their slow-moving, shallow channels meandered through native grasses and willows and provided critical resting and rearing sites for young salmon before they headed to sea.

They are among the most biologically rich freshwater systems that clean water and control floods, but few healthy floodplains are left.

The U.S. Army Corps of Engineers built levees close to rivers to turn braided waters into straight channels. They hoped to gain as much farmland as possible, but some early Corps engineers also believed that they could train rivers to run like canals, making them essentially flood proof, says Nicholas Pinter, a professor and associate director of the Center for Watershed Sciences at the University of California, Davis. Thousands of miles of levees nationwide restrict rivers, protecting millions of acres of farmland and cities. Across the country, Pinter says, new development and levee construction continue within floodplains.

“And that’s the challenge,” he says. “We have engineered enough of our river systems to within an inch of their lives, and now stepping back from that is difficult. It’s a political challenge more than an engineering or technical one.”

When levees fail, the Corps typically rebuilds them higher, often at a steep cost, Pinter says. But his research shows that when levees are moved roughly half of a mile to a mile away from river banks, they require less maintenance and better protect communities. With more territory, rivers can rechannelize during floods, which slows their energy, spreads water across more land and moves sediment down river.

Levee setback projects in Northern California, such as those along the Cosumnes River, decreased flood risk to communities and helped recharge aquifers, Pinter says. Fish came back.

“If the water gets there, the fish will get there,” Pinter says. “Nature seems to be grateful for these little bits that we give back.”

Since the early 2000s, Sinks has led more than a dozen levee removal and setback projects. He’s pieced together floodplains throughout the Columbia River estuary, especially along the Grays River in southwest Washington.

Columbia Land Trust acquired properties after some residents retired and couldn’t maintain their land. Other plots became too wet for farming, while some sat on the market, Sinks says. Over the years, the nonprofit purchased several hundred acres.

The organization preserved some of the last remaining Sitka spruce swamps that once covered large areas of the river’s estuary before levees destroyed the ecosystems. The habitats that remain, and which are now protected, provide abundant food for animals, lower water temperature, absorb floodwater, and give threatened chinook, coho, chum and steelhead safe rearing sites.

“You have to get the water back and the dynamics of the water back on the land,” Sinks says. “Once you do,” he adds, the ecological changes are “nearly instantaneous.” By the following spring, native plants and juvenile salmon return.

Although setback levees are cheaper to maintain over the long term than repairing existing levees, these projects are initially expensive. Organizations often must buy property, then remove and realign a new levee. Bonneville Power Administration paid most of Steigerwald’s $31 million cost as part of the agency’s required habitat mitigation under the 1980 Northwest Power Act for operating Columbia River Basin dams that have decimated fish runs.

Other regional projects are also largely funded by state and federal grants, but many grant programs fund restoration work project-by-project — a patchwork system that doesn’t view rivers and flood management from a broader watershed scale.

Since 2013 Floodplains by Design, a state-run grant program in partnership with American Rivers, Bonneville Environmental Foundation and The Nature Conservancy, has secured $215 million to reconnect more than 7,200 acres of floodplains in 59 flood-prone communities across Washington.

Many of the state’s rivers begin in the alpine, descend thousands of feet quickly, and bring loads of gravel and wood that don’t flow well in confined, leveed systems, often causing flooding.

“We’ve fought the river system for so long that finally we realized it wasn’t working,” Parsons says. “We’re investing billions of dollars to straighten rivers, and it’s not working. So we had to change.”

Parsons and other experts say similar floodplain restoration projects would benefit ecosystems and communities elsewhere across the nation — if the politics align. The Atchison County Levee District in Missouri, for example, realized it needed a new approach after a devastating 2019 flood breached 100 levees along the Missouri River, forcing 278 people to evacuate and caused millions of dollars in damage. The district worked with landowners to buy their land and build new setback levees along a five-mile stretch of the river, reconnecting 1,040 acres of floodplain and better protecting the community.

Northwest tribes are also trying to bring floodplains back to pre-colonization conditions. For nearly two decades, the Stillaguamish Tribe of Indians has removed levees and pieced together bits of floodplain along the Stillaguamish River in Washington.

When Tribal leaders first approached neighbors about salmon recovery, everyone asked how they could help, says Jason Griffith, the Tribe’s environmental program manager.

“So, you start going down the list,” he says. “You need to stop farming the land, you need to plant these natives, remove the levee, take out the bank armory, stop killing the beaver. And they were like ‘Whoa, whoa, whoa. That’s not what we’re gonna do.’ ”

The Tribe then decided to purchase its own land. Once they buy a parcel, they place deed restrictions on it that prohibit any future development.

So far they’ve acquired 1,200 acres, mostly along the heavily farmed estuary north of Everett. Chum, Chinook and other fish can now use habitats that levees blocked for 150 years, Griffith says. Their goal is to restore about 7,000 acres, from spawning grounds to the estuary.

“The literature is pretty clear from across the range of Pacific salmon that these are the kinds of projects that will, in time and with enough of them, move the needle toward more abundant wild salmon,” Griffith says.

But it won’t be easy — or necessarily fast. 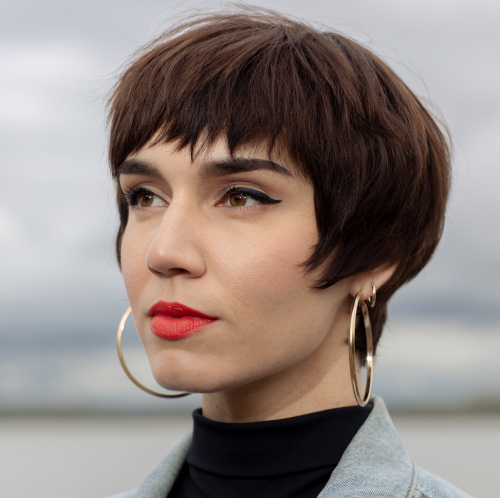 is a writer and musician born and raised in Portland, Oregon. She previously worked at several newspapers in Oregon and recently completed a Pacific Northwest natural history essay collection, which will be published by Portland State University’s Ooligan Press this November.
http://twitter.com/j_woolington https://josephinewoolington.com/