A dense floating mat of algae is seen on the Susquehanna Flats near Treasure Island and Havre de Grace, Md., on Aug. 2, 2019. Photo: Will Parson/Chesapeake Bay Program (CC BY-NC 2.0)

More frequent, longer-lasting blooms can harm both wildlife and human health — and even kill. Can we learn to predict and prevent them? 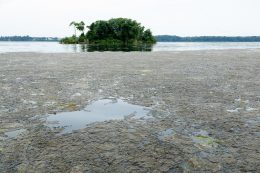 From the fall of 2017 to the beginning of 2019, Florida endured a persistent and damaging algal bloom caused by the algae Karenia brevis, also known as red tide. The blooms formed in both Gulf and Atlantic waters, sickening people, killing birds, fish, dolphins, manatees and other marine animals, and driving visitors away from beach towns.

Scientists say it’s a problem that’s going to get worse — and not just in Florida. Harmful algal blooms, which can occur in both fresh and marine

waters, are becoming more frequent, lasting longer, and occurring in more places. In recent weeks news reports have warned residents in western New York, Utah and California to stay out of rivers and lakes clouded with these microscopic organisms that can sometimes be fatal to people, pets and wildlife.

To be clear, not all algae are dangerous. In fact the vast majority are beneficial to ecosystems. They’re the base of the marine and aquatic food webs, providing nutrients for fish and shellfish, which in turn feed other animals — including people. They also produce half of our oxygen.

“But a small handful of these organisms are harmful,” says phytoplankton ecologist Pat Glibert of the University of Maryland Center for Environmental Science.

We spoke with Glibert about this tiny — but dangerous group — of algae, why they’re becoming more problematic, and what we can do to protect people and ecosystems.

When algae are deemed to be harmful, what is it that they’re harming and how?

Some algae can grow to levels that just create a nuisance. They can overwhelm the system and when they die, their decomposition uses up oxygen, causing dead zones in the sea or fresh waters.

But some of these species actually make toxins that can cause fish kills or harm to other marine organisms. And they can also cause harm for humans when we consume the fish or shellfish that has consumed these organisms.

These harmful algal blooms can occur all over. What are the regional differences in the kind of algae and their potential harm?

In marine waters we are primarily concerned with a group of organisms called dinoflagellates. And in fresh waters, the major organisms of concern fall in a category called cyanobacteria. They make very different toxins and have very different effects both environmentally as well as with regard to human health.

The freshwater toxins are concerning for a number of reasons. On initial exposure one may have a skin rash or something uncomfortable that’s relatively mild. But they can get into drinking water and, over a long period of exposure, they are tumor promoters. We know liver cancer is associated with these toxins, and there’s increasing evidence that the freshwater toxins can also be associated with neurological diseases such as Alzheimer’s, Parkinson’s or ALS. There’s a lot of work going in right now to understand that relationship.

In marine waters we’re typically exposed to toxins through shellfish. The shellfish themselves are not affected by these toxins because a lot of them affect the nervous system and shellfish don’t have a nervous system. But shellfish can accumulate the toxin. One of the diseases that we are very concerned about comes from saxitoxin, which is most common if one is eating mussels. It’s from the dinoflagellate Alexandrium and it can cause paralytic shellfish poisoning. It results in respiratory paralysis. With a high enough dose people do die.

A different toxin is the Florida red tide. That toxin can become aerosolized. If people breathe that sea spray at the beach it can cause respiratory distress, including coughing. Many people can end up going to the hospital, but people aren’t likely to die from it. The other thing that many of the toxins cause is an upset stomach that may take a couple of days to get over, but people do recover.

What about the effects on wildlife?

That depends on the species of algae. But some things like Karenia brevis in Florida are indiscriminate killers. Fish, turtles, manatees are all affected.

In California there’s a toxic diatom species, Pseudo-nitzschia, and it seems to affect sea lions and other large marine organisms. They tend to show symptoms very similar to epilepsy and disorientation. Death is one end point, but there are many other impacts on these organisms as well.

What’s driving the growth of these harmful algal blooms?

We certainly know that blooms are increasing in frequency, in geographic extent, and in duration in many parts of the United States and the world. A lot of this is due to the fact that we are polluting these waters with nutrients — nitrogen and phosphorus runoff from the land.

Nutrient pollution can come from wastewater, whether it’s discharged from municipal sewage treatment plants or from septic systems. We don’t always do an adequate job, in many places, of removing those nutrients.

That’s one source. A second is runoff from fertilizer application, particularly from agricultural use, but we use a lot of these fertilizers on our lawns, golf courses and gardens as well.

And then there’s the waste from concentrated animal feeding operations, whether it’s chickens or pigs or dairy. A lot of that waste is either held in lagoons and ultimately spread on land. Or it goes into the atmosphere and then comes down with rain. So these operations themselves are highly concentrated sources of pollution that end up in waterways.

The other issue is that the climate is changing. Waters are getting warmer. Many organisms grow better when waters are warmer. That’s true for some of these [algae] species.

But because of climate change we’re also seeing changes in precipitation. We’re having more storms in some areas, more hurricanes, and because the atmosphere is now warmer, when those hurricanes do develop, they are often holding more moisture. So hurricanes become wetter. That means that the rain that comes with these storms washes more of these nutrients into the sea.

What can we do to reduce these blooms?

This is a very difficult problem to solve. The ultimate solution is to try to reduce nutrients that are winding their way into our fresh and marine waters.

At a personal level, we can reduce the amount of nutrient fertilizer we put on our own lawns, but the pollution that comes from the concentrated animal operations, from municipal sewage and from crop agriculture are the big issues that we have to solve. And they’re going to be very difficult to solve because we have to continue to grow our food.

There are approaches that people are taking to try to address blooms at the time that they occur, methods to apply various products to reduce the bloom. There is some success in applying clay to the surface of the water that causes the dinoflagellates to fall to the bottom of the bay or estuary. But those are very localized solutions.

The other approach that we are taking is to build mathematical models of when and why and where a bloom may occur and use that as an early warning system. So we may not be able to solve the problem, but at least we can protect human health or seafood resources before a problem occurs.

There are also a number of exciting areas of research. One is my own, which focuses on understanding these organisms from their physiology — how they obtain their nutrients, how they make toxins, why they make toxins. How is nutrient pollution related to not only growth of the algae but production of their toxin?

Also the other area that I think is so exciting is really pulling all of these factors together in building predictive models and using models to ask questions of “what if we did this, what would it show”? Or “what if we did that, what would be that effect”? We’re making great progress, but the problem is still a very large one.

Has our response to the problem matched the scale of what’s needed and the urgency of the issue?

It always seems to be in the forefront at the time there’s a bloom. And then as soon as that bloom subsides, the public interest and the interest in solving the problem go away.

Clearly we need more money to address issues of nutrient pollution. We need to upgrade sewage treatment plants. We need to address the fact that so much of the country still depends on septic systems or very small “package plant” [treatment systems] that do nothing to reduce nutrients.

The issue of concentrated animal waste is enormous because the animal waste isn’t treated and does make its way into the environment by land or sea or atmosphere, and ultimately gets discharged into waterways.

The outlook is for more blooms and longer blooms in more places if we don’t address all of these problems of nutrient pollution and climate change collectively.