The term “M-44” sounds innocuous — almost like the name of a rural highway — but the reality is far more sinister.

M-44s are actually small, lethal devices used on farms and similar sites to kill so-called “pest” animals such as coyotes and foxes. The devices — a favored tool of a U.S. Department of Agriculture program called Wildlife Services — lure animals in with the smell of tasty bait, then inject a deadly dose of sodium cyanide directly into their mouths.

Recent studies have shown that lethal control of predators actually tends to increase livestock deaths, but Wildlife Services continues to use outdated science — and animals die as a result.

It’s not just coyotes that are killed by M-44s. Since 2010, 14,431 animals have been killed each year on average by these poison bombs.

Select a species to view fatalities caused by cyanide bombs Move the slider to view fatalities for all species

M-44s are typically stuck in the ground out in the wild where anything — or anyone — might find them, making them indiscriminate killers. 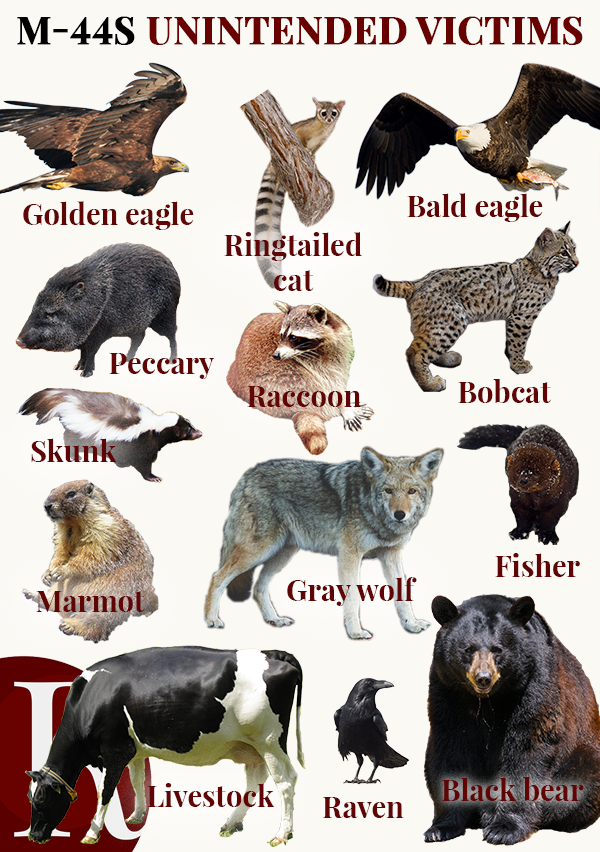 Wildlife isn’t alone, though. M-44s have been blamed for the deaths of numerous pet dogs, and even injured a child in 2017 after he touched what he said looked like “a sprinkler sticking out of the ground.”

With intentional and accidental deaths stacking up, many conservation organizations — including the Center for Biological Diversity, publishers of The Revelator — have called for and even sued to stop Wildlife Services from employing M-44s. As of this writing, however, their use continues.

Editor’s Note: The day after publication of this story, several conservation groups, including The Revelator‘s publisher, the Center for Biological Diversity, petitioned the EPA to ban the use of M-44 cyanide bombs.