A moose in the Yukon Wildlife Preserve. Photo: Aaron Bradley, (CC BY 2.0)

What if moose, mighty and massive, went the way of bison and other once-abundant species?

I didn’t emigrate from Britain to Canada because of moose. Not exactly.

Imagine telling your family you’re abandoning them for another country because of a long-legged ungulate with a flap of skin hanging beneath the throat and a peculiar, stiff-legged gait.

But I’m not sure Canada’s pull would have been so strong if I hadn’t been sitting, one day, at the front of a Greyhound bus on the way to Hay River in the Northwest Territories and the driver hadn’t slowed down so we could watch a moose treading across a creek by the side of the highway. Or if a couple of years later, when I was cycling alone across Canada for almost 6,000 miles, I hadn’t stopped to watch a moose sauntering on the other side of the Blackstone River along the Dempster Highway.

Seeing a moose in person — they can be 7 feet tall at the shoulder and weigh more than a thousand pounds — is both shocking and mesmerizing. Where I’m from, badgers are the largest remaining wild animals, and they’re being culled by the tens of thousands to the point that they’re at risk of becoming extirpated in parts of England.

It was February when my British husband and I moved into our house in Whitehorse, Yukon, just over the 60th parallel in northern Canada. All the homes on our side of the street back onto miles of forest; the snow was still thick on the ground, and we were looking forward to discovering what was in our back garden when it finally melted.

Despite the snow, it didn’t take long to notice the moose antlers propped up against the fence beside an overgrown rhubarb plant and concealed by low spruce boughs and the open, snow-wedged gate. The antlers were still connected to a bloodstained section of skull. They hadn’t been shed by their living owner as male moose do each winter; they’d been hacked off a corpse by humans.

Every year people shoot moose, cut them up and put them in their freezers. Every year another batch of antlers is nailed to gates, garages and cabins, a custom that always makes me think of the medieval predilection for displaying decapitated heads on spikes.

Yukon is known for being home to two moose for every person. It’s the sort of fact Yukoners are proud of. Each year, though, that ratio becomes less true as the human population steadily rises. We’re currently at about 42,000 people to 70,000 moose.

Even though moose here aren’t considered endangered at the moment, that doesn’t stop me from lying in bed worrying about them. The truth is that we don’t know exactly how many moose live in Canada right now. There may be a million, or there may be 500,000.

But I do know this: We’ve taken abundant species for granted before, and they’ve paid a terrible price. Passenger pigeons once numbered in the billions and now there are none. As many as 60 million buffalo may have roamed North America and, after we hunted them to the brink of extinction, we had to rebuild their species from a population of just a few hundred.

I’m not a biologist. I’m a poet, so I tend to let my imagination run away with me. More and more, I’ve been thinking about what it will be like when so many of the animals we share the planet with are no longer here. In the forest behind my house, I imagine smooth snow, unbroken by the prints of any creatures other than humans and our dogs. No squirrel tail scuffs, no cute cartoony hare ovals, no scarpering coyote tracks. No deep postholes made by moose that my whole leg disappears into when I step.

I always thought one of the main reasons I love going into the forest was so that I could be alone, but I’ve realized I don’t actually want to be alone. I want to have to stop as I’m skiing along because I’m not sure if the movement I’ve sensed ahead is a branch shifting in the wind or a fellow mammal passing between tree trunks. I want to have to carry my bear spray, my whistle, my phone, just in case. I want to see three moose cross the trail ahead of me and have to grab my dog to put her on the lead.

We’ve lived here for 14 years now, and the antlers are still propped up against our garden fence. That first summer, I collected stones in the woods and arranged them around the skull. I said sorry to the moose and wrote a poem. I let the fireweed grow through the stones. In the autumn, I let aspen leaves and spruce needles cover the skull. Then the snow returned. An artist friend flew up to stay and we talked of freighting the antlers to her so she could carve them. We talked of separating the antlers for shipping, sawing them off the skull, how that would be a pity.

Lying in bed at three in the morning, when I fear that no species on this planet — including us — is going to make it, I worry about what to do with the antlers when all the moose have gone. Even though there must be hundreds of thousands of antlers hammered to gateposts and cabins all around the northern hemisphere, I’m convinced they’ll eventually become a sought-after commodity, like rhinoceros horns and elephant tusks. What if I get up to walk the dog one morning and discover they’ve vanished, stolen in the night, the arrangement of stones scattered?

I know what I’ll do with the antlers. I won’t nail them to a wall so nobody can take them. I’ll bury them in the garden, and I won’t mark the grave. 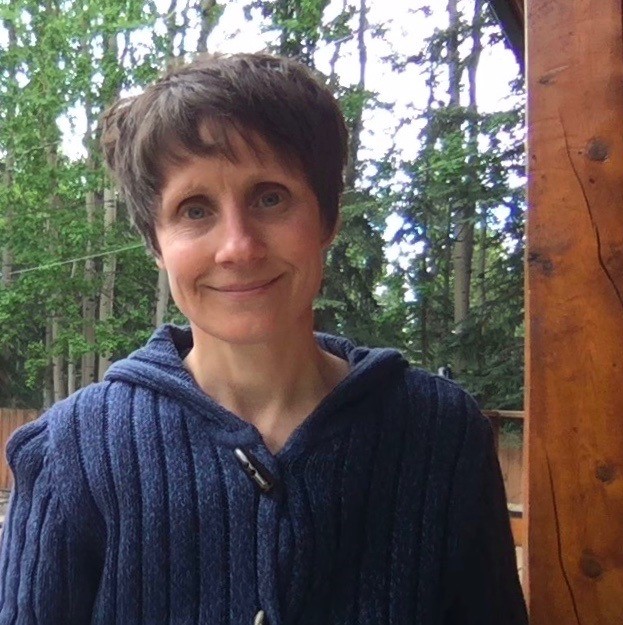 is an award-winning poet living in Whitehorse, Yukon, Canada, on the traditional territories of the Kwanlin Dün First Nation and the Ta'an Kwäch'än Council. Her fifth book and third poetry collection, Endlings, is all about extinct animals.
http://twitter.com/JoannaLilley_ http://www.joannalilley.com/