I first met Tom Moyer in the spring of 2015. We were in Salt Lake City, Utah, at a conference hosted by Citizens’ Climate Lobby, an advocacy organization working to generate the political will for action on global warming. Moyer pulled me aside in the hallway during a break, telling me, “I’m a fifth-grade science teacher at a progressive elementary school, and I’m the Citizens’ Climate Lobby’s contact for our brand-new black, Mormon, Republican congresswoman, Mia Love.” He stood there with a big beaming smile, confident I’d want to hear his story.

Salt Lake was my last stop before returning home to Los Angeles. I’d been traveling the country interviewing activists for a book I’m writing about unlikely climate heroes, ordinary people who step forward and stick out their necks to try to slow climate change — people like the man standing in front of me.

As a scientist, Moyer told me, he was no stranger to the how and why of climate change, but as a citizen he knew very little about the political process. Citizens’ Climate Lobby helped change that. In the months before we met, Moyer trained to speak about the issues, step forward as a leader and — despite the prevailing winds of the country — how to talk graciously to people who didn’t share his politics.

So how does a progressive, white, non-Mormon male develop a good working relationship with his black, Republican, Mormon female member of Congress whose previous record of support for environmental issues has been less than stellar?

He told me: By building trust, by being respectful, and by letting go of assumptions.

Citizens’ Climate Lobby developed this model in part by using the work of the Yale Program on Climate Communication to train volunteers. Their research found that effective climate communication begins by knowing who you are talking to, what their world-view is and what they value. People want to be appreciated, listened to and acknowledged. People want to be understood. It’s all easy to say, but harder to live by.

Despite the fact that Moyer and Rep. Love appeared to have little in common, the teacher felt optimistic and ready to jump in. He took his first steps, just before I met him, by introducing himself to the congresswoman’s chief of staff, Mike Squires.

“We began an email correspondence,” he says.  “Right from the get-go, he was open, friendly and receptive.”

Not all relationships with congressional staff get off to such a good start. Balancing many twirling plates, staff members are often distracted and overwhelmed. And if the issue’s a hot-button one, they may not even respond to requests for a meeting.

Fortunately that was not the case with Squires. That summer Moyer and his wife Laura were in D.C. for a family vacation and scheduled an in-person meeting with the chief of staff.

Two years later Moyer’s still practically giddy when he recalls the hour-long meeting. “It was really fantastic,” he says, animated. “We felt comfortable with each other. We learned that Squires had been Rep. Love’s campaign manager, that he was a graduate of BYU and considers himself to be an environmental Republican.” Moyer was particularly excited to hear Squires say of his boss that there was a chance she would make climate change one of her priorities.

“Meetings between Republican members of Congress and environmental activists can sometimes be fraught with skepticism,” Rich Piatt, the congresswoman’s communications director, told me during a recent email exchange. “Both sides [Moyer and Squires] were able to have an open, honest dialogue about relevant issues. They talked about their shared love of Utah’s beautiful landscape, the outdoors, air quality and environmental degradation.”

Squires continued to be an ally, making useful suggestions to Moyer about how to engage the congresswoman on the issue of climate change. He started by providing a list of names of few Utah State Assembly members and members of Congress. “Contact these folks and ask them to talk with Congresswoman Love about why she should pay attention to climate change,” he said. “These are all people she respects and holds in high regard.”

As Squires predicted, the congresswoman was receptive. Moyer told me that after listening to her allies, being briefed by a climate scientist, and later after hosting a town hall, Congresswoman Love started to re-evaluate her stance on climate change.

The big turning point came in December 2016 when she joined the bipartisan Climate Solutions Caucus. The caucus, founded in February 2015 by Ted Deutch (D-Fla.) and Carlos Curbelo (R-Fla.), is an anomaly in today’s Congress. Against the backdrop of so much congressional ill will, this group of 30 Republicans and 30 Democrats addresses and takes action on climate solutions.

The congresswoman, coming from a heavily Republican district, reportedly took a risk in joining the caucus. A few months later she took another, writing an op-ed that appeared in the Salt Lake Tribune that contradicted a prevailing Republican notion that climate solutions are incompatible with a thriving economy. These risks paid off: According to Moyer, Love continues to enjoy good support in her district.

In recognition of her actions, Love received a Climate Leadership Award at the Citizens’ Climate Lobby annual conference this past June. I watched her walk up to the podium and speak to a packed and attentive hall. “We can be a lot more productive when we get two parties in a room together to talk about the things that they’re for, rather than just what they’re against,” she said. “We all share a responsibility to be good environmental stewards, and working together we can find solutions that both protect our climate and promote a thriving economy.”

More recently, as I watched a live streaming of the Climate Solutions Caucus, the Congresswoman spoke out with conviction, “I’m going to try to get as many people on this caucus as possible.”

Moyer and Love both publicly stated that when they first met three years ago, they never would have predicted the congresswoman would emerge as a climate change leader. Their working relationship is a testament to the power of listening, a willingness to look beyond labels and to find solutions — a model worth replicating.

For more on Rep. Love and climate change, see this clip from the documentary series Years of Living Dangerously: 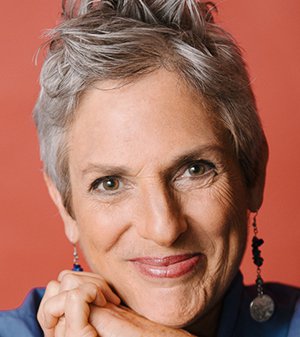 is a writer and speaker who has been inspired to action by the momentous challenge that is climate change.
http://twitter.com/daviarivka http://daviarivka.com/