The Lorax taught us to speak for the trees. But what if we also learned to listen to them?

When trees are cut, they send out the same electronic patterns as a wound of human flesh. And when some are injured by insects, they tell the others: Produce the enzymes that will protect you.

In our Age of the Anthropocene, the talking and listening by trees echoes the communications of humanity. This is one of the messages I hear in the books of the German forester Peter Wohlleben, especially the bestselling The Hidden Life of Trees, What They Feel, How They Communicate, which has been translated into 11 languages. He has the touch of Wangari Maathai or Rachel Carson, making sense of the difficult (at first) idea that, in the ultra-slow actions of tree-time, they talk.

The communications between trees are often practical messages, such as warnings of insect invasions or leaf-eating giraffes. Trees create most of their electric signals and “sounds” outside the range of human senses, but researchers have established these basics: Trees work in families; mothers send descendants nourishment through the connecting fungi and root filaments that interlace beneath forests. Suzanne Simard at the University of British Columbia heads a team of grad students who track the signals between trees in the root system networks underground and up in the open air too, where the communicating takes place through the medium of scented pheromones.

Yes, there is evidence that trees have a sense of smell, and even of taste.

In my layperson’s browsing of these studies on the expressiveness of trees, I didn’t find an observation of joy. As I write this the trees in Brooklyn are blossoming and full of ecstatic songbirds that sing late into the night and start again before dawn.

The question arises, are the trees singing along with the melodies filling their branches? “What do trees say when there is no danger, and they feel content?” Monica Gagliano of the University of Western Australia told Smithsonian in 2018. “This I would love to know.”

From this thought, a sudden flood of possibilities. This changes our experience of the natural world. This is the revolt of the beautiful view. All the many things that lay down upon that view of nature are now confronted by a no longer hidden world. What we see is alive with language, conversations, meaning. Concepts of beauty, property lines, recreation are overwhelmed. The beautiful view has within it an emergent community, a world of feelings, intelligence, lived experience.

This means that your local wasteland is connected, and we don’t know what the messaging is and where it might go. No one can say at this point if the communicating jumps the border of subspecies or species, but like our mammalian howls, it must. The international collection of scientists now unearthing this buried Tower of Babel mostly tell visiting writers that they don’t know much about the content of the talk, but it sure is exciting.

Aided by the ancient desire shown in our mythology of anthropomorphizing trees, we must go right to the question, “Is the fungi wiring so general in the landscape that the Earth is like a brain? Is the maneuvering of life through extinctions discussed on the planetary level?” Very quickly we are in the creative territory of Ursula K. Le Guin and Philip K. Dick.

Some of my readers must share the fantasy with me, when we reflect on the assault of fire and flood, virus and heatwaves. Doesn’t it sometimes seem as if the wave of natural disasters is a coordinated strategy? Is Earth the ultimate activist?

What does this tree-communicating mean for Earth-defending activists? If the landscape is fulminating everywhere with different flows of talk, isn’t this a good thing to discover at this moment when the environmental movement has allowed itself to sink into boredom? The big NGOs — you look at their websites and they don’t seem to like the Earth! They display the fear, the pain, but not the joy.

What do environmentalists say when there is no danger? What do they say when they feel content? When we fail to convey these emotions, when we miscommunicate our values, we fail to prevent the next round of chainsaws and cuts to our very flesh.

This invisible miscommunication pervades our culture, as well. We have watched with growing horror as the possibility of a conscious Earth becomes the juicy plot point in commercial entertainment. The huge movies of James Cameron may be the most egregious example. The big blue aliens on Pandora, with their mother tree and Tinkerbell-like seeds raining down, use green politics as the storyline while depoliticizing the audience with special effects that leave us purged, hung-over, completely used. The Earth as blockbuster is diabolical. The Earth is dragged into Hollywood hegemony, against which “resistance is futile.” After we recover from the movie, we might remember that monetizing nature makes it impossible to defend nature.

Cameron masks the revolution that is possible with the acceptance of a talking and thinking Earth. This is a new reality, not a new product. (Well, the communication with the Earth is new to us, the Euro-Americans who have pushed the living Earth away by mediating it, mythologizing it, fearing it.).

The Earth as an alive being — that would be the one transformation that could successfully de-consumer-ize us. This is radical indeed.

The ultimate authority at the COP26 climate conference in Glasgow were the Indigenous mothers who led the walkout, rejecting the negotiations, the whole corporate “net-zero carbon by 2050” that was on offer at that poker table. Now it is clear that the mothers were walking out of the language of death because they had the language of living things whispering and shouting inside them.

The talking trees take environmentalism out of that negotiation, out of our predictable motives for fighting for the Earth, the anger, ego, career, fear, bitterness — the emotions of futility as the rich keep drilling. The talking trees are whispering in their woody language a far deeper radical defense of Mother Earth.

Let’s keep listening. Our instructions are rising toward us from that beautiful view.

The Earth Reviews Her Activists 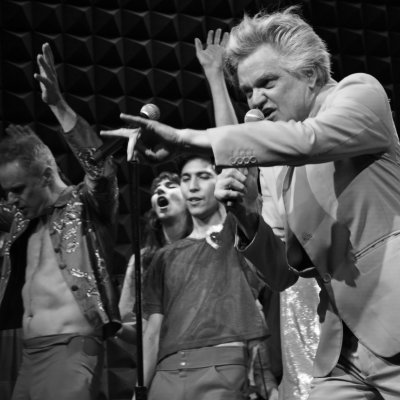 is the cofounder of the Church of Stop Shopping, an activist/theater group based in New York City.
http://twitter.com/revbillytalen https://revbilly.com/