A new book dives into the ever-changing history of conservation legislation — and gives us a hint of the future.

The conservation movement can often take itself for granted. For all those who have advocated on behalf of public lands and animals, and who have petitioned elected officials about taking steps to protect and defend our land, air, water and food supply, the ceaselessly daunting task of defending our natural world and those who inhabit it can feel like a perpetual uphill climb. 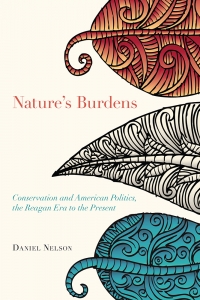 Sounding the alarm and inspiring action, especially within the framework of our country’s legal and political system, is where the challenges often lie. That eternal struggle is illustrated in Daniel Nelson’s new book Nature’s Burdens: Conservation and American Politics, the Reagan Era to the Present (University Press of Colorado, $31.95), which covers the intersection of defending wildlife and wild places with the ever-changing political shifts at the White House and in Congress.

The book makes a deep, detailed dive into the history of conservation legislation, beginning in the late 19th century, when the first national parks were created. It soon moves into the 1960s and 1970s, explaining how critical pieces of legislation — specifically the Endangered Species Act, the Land and Water Conservation Act and the Wilderness Act — came into being. The book then shifts into the Reagan era and beyond, where we see the working of individuals (like Interior Secretaries James Watt and Bruce Babbitt), a variety of agencies (such as the U.S. Fish and Wildlife Service and National Park Service) and administrations — which, not surprisingly, view conservation differently depending on who occupied the White House at the time.

Political appointees in the Agriculture Department under Reagan, for instance, pushed for more cutting and logging in the Pacific Northwest. Following up on a campaign promise, one of President Clinton’s earliest initiatives was a “timber summit” that led to the Northwest Forest Plan. That plan, while controversial and not nearly as limiting and strict as environmentalists had hoped, led to significant reductions in logging. This kind of back-and-forth is a consistent theme.

But the most compelling elements of the book have less to do with legal maneuverings and bureaucratic wranglings and more to do with the shifts within the conservation movement and conservation science on the most efficient, effective ways to save species and public lands. Our understanding of the natural world, and what’s truly in the best interest of species and their habitat, evolved throughout this period — and continues to evolve. By referencing academic and scientific journals and reports, the author shows how nature doesn’t recognize our politically influenced rules and borders and boundaries; the interdependence of nature extends way beyond our political compromises.

Likewise, the timelines of natural evolution don’t hue to election schedules, making the task of marking — and even defining — success a critical challenge in it. This a key question Nelson asks: How do environmentalists measure progress? Is it by how many species are saved from extinction, or by how many acres are marked as national parks, refuges or wilderness? One of the compelling narratives in this book is how what environmentalists and conservationists are trying to change has evolved with scientific — and to some degree, philosophical — theory on species and land management.

Nelson references studies showing attempts to “return” areas to prior, pristine conditions (before grazing, development, etc.) may be inadvisable just as much as it may be impossible. Land and the species on it change and evolve; even trying to restore specific species’ populations to certain areas may not be in the best interest of that species if the other conditions that led it to thrive there initially are no long in place. Imposing human judgement on what we view is best for nature and animals has risks of its own; Nelson shows us that the reintroduction of some species in certain locales has worked, but over time, while what’s truly best is for us to leave nature alone, in as large as swaths as possible, and let nature take care of it on her own.

But over time — and this is where Nelson’s rigorous study most clearly elucidates the conservation challenge — competing interests among ranchers, hunters, livestock producers, real estate developers and conservationists have forced all kinds of compromises, and back-and-forth, in the political realm of land management.

And as administrations change, so too do their philosophies in terms of running the Interior department and its myriad agencies. With nature constantly evolving and our political landscape always changing, keeping things consistent over the long timeframes required by nature and species is almost impossible.

Nelson’s book relies heavily on legal specifics and political maneuverings, which at times made the text a bit dry. I wish he’d provided more color and commentary from politicians, agency staff and representatives of groups in the conservation movement. It would have brightened the material and made it feel more alive. Nelson spends a good bit of time on the histories and missions of various nature groups. Their growth and influence over the years are also an important focus of this book. Adding in more detail regarding the colorful personalities, and maybe a tad less focus on the fates of various legislative proposals, could have made this a more engaging and effective read.

The book concludes with the Obama presidency. We know — though it’s left unsaid — that the conservation pendulum in America has shifted again. A later volume could include details of the current chapter of the conservation struggle. But the point of this book, really, is that the pendulum never stops swinging. Coming to terms and dealing with that might be the conservation movement’s biggest challenge.

is the online fundraising director for the Center for Biological Diversity. He holds a master's in media studies from The New School, a bachelor's in literature from Columbia University and a bachelor's in Talmud from the Jewish Theological Seminary.
http://twitter.com/scottgilman