A peatland in northern Finland. Photo: Ninara, (CC BY 2.0)

Warming temperatures are transforming northern peatlands — with potentially dire consequences for biodiversity and the climate.

The following excerpt is from Swamplands: Tundra Beavers, Quaking Bogs, and the Improbable World of Peat by Edward Struzik. Copyright © 2021 by the author. Reproduced by permission of Island Press, Washington, D.C.

The Hudson Bay Lowlands is a much different place in late spring and summer, when its big rivers are flowing — the Seal, Churchill, Nelson, and Hayes in Manitoba, the Severn, Winisk, Albany, and Abitibi in Ontario, and the Eastmain and La Grande in Quebec. On a field trip I did with a biologist from the Canadian Wildlife Service, I learned that the Hudson Bay Lowlands have the highest proportion of palm warblers and yellow rails, a chicken-like marsh bird that is rarely seen, little studied, and very mysterious. The bird, according to ornithologist Alexander Sprunt, is more like a “feathered mouse” than a bird because it seems to prefer to run and hide rather than fly. 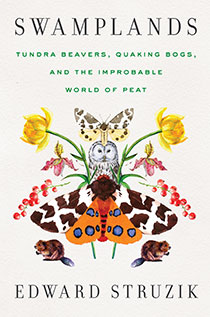 During migration, few other places in the world have this many red knots, Hudsonian godwits, ruddy turnstones, black scoters, pectoral sandpipers, semipalmated sandpipers, white-rumped sandpipers, greater yellowlegs, and lesser snow geese. The Hudsonian godwit, which was once regarded as one of North America’s rarest birds, stands out among them because it has made a notable, if shaky, comeback. Two-thirds of these birds, some of which fly nonstop from their wintering grounds in southern South America, stop over in their migration along the Hudson Bay shoreline. Many of them breed in the Hudson Bay Lowlands. This is why the Audubon Society is in full support of the Mushkegowuk Council chiefs who are calling for the establishment of an indigenous-led Marine National Conservation Area to protect that breeding habitat, the denning grounds of the polar bears as well as the caribou that dwell in the peatland regions.

If there is a peatland outside Siberia that the Hudson Bay Lowlands can be compared to, it’s the labyrinth of fens, bogs, and swamps in Polesia, which stretches out from the riverbanks of the Bug in Poland, the Dnieper in Ukraine, and the Pripyat in Belarus. The comparison to Polesia is apt only because the mires there are also among the last refuges for globally threatened birds such as the aquatic warbler and also for wolves, lynx, bison, and other animals that are threatened throughout Europe.

Polesia’s Almany (or Olmany) Mires is one of the largest intact peatlands in Europe outside Scandinavia. But it has been degraded by power lines, border control infrastructure, the Chernobyl nuclear disaster, and a seventy-mile network of forestry roads that the government of Belarus has recently sanctioned.

In contrast, the Hudson Bay Lowlands are more than 10 times the size and largely unexploited except for hydroelectric dams and a handful of mine sites. The meltdown of the Laurentide ice sheet is so recent that land pushed downward by the enormous weight of that ice is still rebounding, reshaping the landscape and reconfiguring the drainage in ways that favor the growth of marsh communities of aquatic sedges before sphagnum and other mosses take over and turn them into a bog or fen.

Paludification is the hydrologist’s word to account for this kind of ecological succession. There is no other direction for rain, melting snow, and river floods to go but sideways on impermeable, finely textured silt and clay that is as flat and frozen as it is in this region. Peat not only continues to grow here, it insulates the permafrost below and stores vast amounts of carbon that would, if unleashed, warm the world much faster than it is already warming.

I never thought much about the implications of this until 1990, when I crossed paths with scientist Nigel Roulet. Roulet and more than two dozen other scientists were collaborating with NASA to sample the chemistry of the atmosphere above the Hudson Bay Lowlands. It didn’t occur to me back then that the carbon stored in peatlands could be a major driver of climate change if it was disturbed or thawed out of permafrost areas. Chinese rice paddies, belching cows, and dirty diesel trucks were getting most of the media’s attention in those early stages of the climate-change discussions.

Scientists now know far more than they did in 1990 about how much carbon is freed when permafrost thaws, when trees and shrubs growing on top of it burn, or when it is disturbed in other ways. Where that thawing is in high gear, as it is in Tanana Flats in central Alaska, and in the Scotty Creek area of the Northwest Territories, it is dramatically reshaping the landscape, reversing the succession in some cases from marsh to fen and forest and then back to fen, bog, and marsh.

At Tanana Flats, permafrost degradation increased the size of three large fens by 26% from 1949 to 2018. Torre Jorgenson, the lead author of a report on the degradation, says that the trend to warmer, snowier winters (snow traps warmth) has pushed the region past the tipping point where permafrost will no longer form and where the complete thawing of permafrost is inevitable.

Canadian scientist Bill Quinton and colleagues have seen the same thing playing out in the sub-Arctic region of Scotty Creek in the Northwest Territories. Scotty Creek drains about 60 square miles of fens and bogs. Where there is permafrost at Scotty Creek, it is warm and vulnerable to thaw. This is significant because snow acts like a blanket, trapping some of the heat that has thawed the ground in summer. Thick, long-lasting snow cover followed by a quick spring melt- down can hasten the thawing of the frozen ground in places like this. (In areas where permafrost is meters thick and rock-solid, it insulates the ice from the warming rays of the sun.)

Snow measurements at Scotty Creek began in 1994, five years before Quinton set up a semipermanent field station. It is rare to have long-term data like this in the Canadian North, one that underscores unequivocally what happens when winter snow is deep, spring runoff is significant, and the thawing of relatively warm permafrost switches into high gear. It’s why so many scientists have come knocking on Quinton’s door, asking to come in and participate. It’s also why the Dehcho First Nations, which will one day become the legal owners of the area, are keenly interested and actively participating in what he is doing.

The peat at Scotty Creek is typically nine to 12 feet deep, and 30 feet in some places. In the 1950s, permafrost covered nearly three-quarters of the region. It’s down to a third of that. The edges of those local patches of permafrost are receding by about three feet each year.

Trees are literally drowning in depressions created as the permafrost thaws and the ground surface collapses, and as melting snow and rain fill them up with water. The transition from land to water has been so dramatic that Quinton has had had to move base camp twice. “It’s crazy. There is water everywhere,” Quinton told me. “What we’re seeing perhaps more clearly than any other place in the world is ecosystem change occurring in fast motion. The implications for water quality, vegetation changes, biodiversity, and the people living in this part of the world are profound. Many of them are indigenous hunters, trappers, and fishermen. They tell me they have never seen anything like this.”

The best way to visualize what Quinton is talking about is to describe what occurred 200 miles to the northeast in the Mackenzie Bison Sanctuary, where warming temperatures and wildfire have thawed and collapsed peatlands in and around the sanctuary so intensely that incoming water drove most of the 700 wood bison out of the protected area. Some 385 fires burned a record 3.4 million hectares (8.4 million acres) of the Northwest Territories in 2014. The exodus was so complete that Terry Armstrong, a biologist working for the government of the Northwest Territories, had a difficult time finding animals when he flew in to do a count in 2015.

There is some debate as to whether this thawing of permafrost in peatland ecosystems is, as Canadian scientist Antoni Lewkowicz describes it, “a long freight train moving slowly as it unloads its greenhouse gases,” or as others warn, a carbon bomb about to blow as the train careens off the tracks.

Even if this thawing of the Arctic and sub-Arctic is just a slow-moving freight train, as it no doubt is in most permafrost regions, it is still a major concern because there is so much carbon stored. Northern peatlands cover an estimated 1.4 million square miles, an area larger than all of the western United States and Texas combined. They have accumulated as much carbon as there is stored in all of the world’s forests combined, half of it stored in permafrost.

A one-degree increase in temperature has the potential to free up the equivalent of four to six years of fossil-fuel emissions. This is all spelled out in 2020 report produced by Swedish scientist Gustaf Hugelius and 13 scientists from around the world, who concluded that global warming may very well transform northern peatlands from landscapes that cool the climate to ones that will eventually warm it. 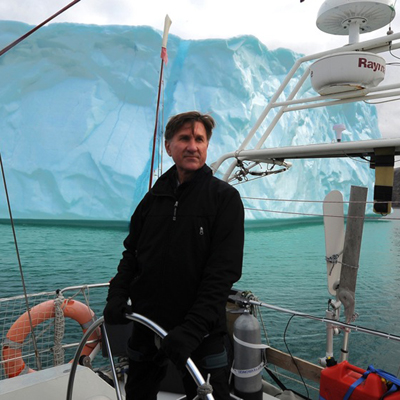 has been writing about scientific and environmental issues for more than 30 years. A fellow at the Institute for Energy and Environmental Policy at Queen’s University in Kingston, Canada, his numerous accolades include the prestigious Atkinson Fellowship in Public Policy and the Sir Sandford Fleming Medal. His books include Swamplands, Future Arctic, Arctic Icons, The Big Thaw, Northwest Passage, and Firestorm.
http://twitter.com/@Kujjua