Got knowledge about endangered species? A new toolkit tells you how to put it to good use.

Scientists who want to support the Endangered Species Act, or the species it protects, have a new toolkit available to help them to do just that.

“Advancing Science in the Endangered Species Act,” written by experts from the Union of Concerned Scientists, offers a primer on the conservation law itself as well as a series of easy steps scientists and other people can take to advocate for strengthening its impact. 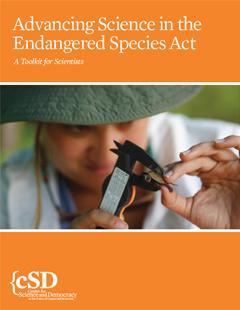 The toolkit — one of several published by the organization — comes in response to the dozens of legislative threats currently facing the Endangered Species Act, ranging from riders to reduce protections for certain species to attempts to gut the Act or kill it entirely.

“Everything’s kind of crazy under this current climate,” says the toolkit’s lead author, Charise Johnson, research associate with the Union of Concerned Scientists’ Center for Science & Democracy. “A lot of people think, ‘Oh, I’m just a wildlife biologist, I can’t do anything.’ Well, let me show you what you can actually do.”

For scientists the first steps in the toolkit involve familiar activities such as conducting new research, identifying species of concern, and gathering and submitting scientific evidence for plants or wildlife that are candidates for protection.

“We’re just encouraging people to do the things that they already do,” Johnson says. She adds that these are all actions which support the mandate for the Endangered Species Act to use the “best available science.”

More broadly the toolkit recommends actions such as providing expert testimony, conducting peer-review of scientific assessments, reaching out to legislative representatives to advocate for science-based decision-making, collaborating with other scientists, writing op-eds, and even using social media to promote broader knowledge of at-risk species.

“Small things like that really add up,” Johnson says. “Even using social media to educate others is a huge thing that you can do as a scientist. You already know these things. By talking to other people in your community, you’re already making a little bit of a difference.”

All of this comes at a time when many scientists feel their collective work on climate change and other topics is under attack and needs to be defended. “Right now we see a lot of scientists actually wanting to engage in advocacy, which is something they normally stay as far away from as possible,” says Johnson. “We have people stepping up, saying ‘I can call my local elected representative, or write a letter to the editor, or sign a comment.’ We have scientists saying, ‘Not only am I an objective scientist, I’m also a citizen and I’m concerned and there are things that I feel I should be doing as a citizen, as my civic duty.’ ”

The toolkit focuses on two main areas of the Endangered Species Act where people can participate: the listing and delisting processes for threatened species. “The ESA is a huge statute,” Johnson says. “We realized how daunting it would seem for people who wanted to get involved. We’ve made this to help people who don’t know where to start and help them find a place to start, to get their feet wet.”

Johnson says the toolkit could serve as an effective set of guidelines for anyone, regardless of their field of expertise. “It’s not just for wildlife biologists or plant biologists or ecologists,” she says. “It’s for any scientists, or any experts, whose work would inform part of a species listing.”

Nonscientists can participate, too. Johnson says people can find helpful tips in the toolkit, regardless of their professional expertise. The webpage for the toolkit also offers a letter anyone can send to his or her senators, asking them to support science-based safeguards to protect the Endangered Species Act.

“Everybody has their place,” Johnson says. “Everybody has something that they can do. We’re just trying to give people the tools they need to do that.”