These golden jewels have vanished from Panama’s streams, but there’s still hope for the critically endangered Panamanian golden frog.

Panamanian golden frogs were once reasonably common but have disappeared from their entire range, largely due to the deadly amphibian fungal disease known as chytridiomycosis. They now exist only in conservation breeding programs.

These small, fluorescent-yellow harlequin toads bred along cold, fast-moving forest streams. As the deafening sounds of the waterfalls drowned out their mating calls, Panamanian golden frogs evolved a unique semaphore-like means of communication — a limb-waving behavior — to attract the attention of potential mates. Their vibrant colors, however, don’t seduce potential mates but instead warn predators of their tremendous toxicity.

The species lived in the Central Cordilleran rainforests and cloud forests of western-central Panama.

Panamanian golden frogs are critically endangered, with a drastic population decline of more than 80% over a 10-year period due to chytridiomycosis combined with habitat loss and pressure from the pet trade. Currently, it is known to survive only in captivity. If a population does remain in the wild, it likely contains fewer than 50 mature individuals.

Panamanian golden frogs have faced a multitude of human-caused threats. Due to their bright colors and the belief that they bring good luck, the frogs were once illegally collected in large numbers for sale in local markets and the international pet trade. On top of that, they lost suitable habitat to housing developments and agriculture. The amphibian fungal disease known as chytridiomycosis only added to the threats. In 2006 Panamanian golden frogs started experiencing severe chytridiomycosis-related declines, and the last confirmed observation in the wild was in 2009. Panamanian golden frog habitats are still affected by land-use changes, and the chytrid fungus is still present in its range, which has led many experts to believe they are extinct in the wild.

Recognizing the chytridiomycosis threat, the first efforts to establish captive assurance populations of amphibians began in 2000 when Panamanian golden frogs were exported to zoos in the United States to be managed as part of a species survival program. This conservation project, called Project Golden Frog, established a healthy breeding colony of Panamanian golden frogs at the Maryland Zoo and later at other zoos around the United States. Additional colonies are maintained in Panama at the El Valle Amphibian Conservation Center and at the Smithsonian Tropical Research Institute’s Panama Amphibian Rescue and Conservation Project.

The moment that gave me hope:

Few people living in Panama today have ever seen a Panamanian golden frog in the wild, yet images of the frog are displayed everywhere. The golden frog, or rana dorada, is found on lottery tickets, T-shirts and festival posters, and each year on Aug. 14 thousands of people celebrate Golden Frog Day.

I never had the great opportunity to catch a glimpse of a wild golden frog, but I did come close at La Rana Dorada pub in downtown Panama City. Surrounded by hip golden frog artwork on the walls as I sipped an IPA adorned with another golden frog, I was reminded how this remarkable species has become such a huge part of the country’s culture. A flagship of Panama’s unique biodiversity, the golden frog is revered as a symbol of good luck and prosperity. I hope that good luck applies to them, too — that they’re still out there, waving their brilliant yellow limbs in the air, waiting for us to find them.

Meanwhile, captive populations of Panamanian golden frogs are doing well, and we’re optimistic they may be returned to the wild in the future. For any reintroduction program to be successful, however, there needs to be habitat for the frogs to return to. We need to take urgent action to conserve Panamanian golden frog habitat and to reduce the risk of chytridiomycosis infection to ensure they have the best chance of survival. 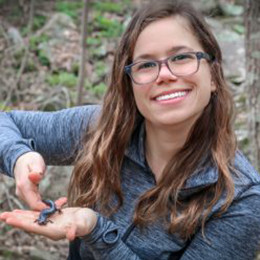 specializes in species assessment initiatives and the analysis of species conservation data. Kelsey is currently focused on assessing the global extinction risk of the world’s amphibians. As a program officer of the IUCN SSC Amphibian Red List Authority, Kelsey works to maintain and update all known amphibian species on the IUCN Red List to inform and catalyze action for conservation.
http://twitter.com/kelseygoeswild