The Global Climate Strike in London on March 15, 2019. (Photo by Garry Knight)

The author and activist talks about climate hope, grief and her new book, On Fire: The (Burning) Case for a Green New Deal .

This week millions of people from more than 150 countries are expected to take part in a global climate strike — an effort spurred by students who have been striking weekly to demand action on climate change.

In the United States, activists hope meaningful policy will follow protest. Naomi Klein’s book On Fire: The (Burning) Case for a Green New Deal makes the case for one specific way forward — the proposed Green New Deal. It’s a plan to slash global emissions along with addressing other issues of economic, racial and gender justice.

“Young people around the world are cracking open the heart of the climate crisis, speaking of a deep longing for a future they thought they had but that is disappearing with each day that adults fail to act,” she writes in the book.

For years Klein — author of bestsellers such as The Shock Doctrine and This Changes Everything — has been sounding an alarm about the growing climate crisis, but also peeling the curtain back on the machinations of the powerful interests that are profiting from the fallout.

Her latest, a collection of essays and speeches spanning 10 years along with timely new material, provides a compelling look at how we got to where we are and where to go next. We spoke to Klein about why the Green New Deal is gaining momentum, why justice is at the core of climate action, and what’s at stake in the 2020 election.

Your book is a progression of your essays over the span of a decade. What did you notice in looking back over those years?

I found reasons for hope and there was also a lot of grief. We’ve lost a lot over a decade. This is really such a fast-moving crisis, even though it gets marketed as a slow-moving crisis.

I don’t think we’re losing Arctic ice or Antarctic ice in a manner that is at all slow. I write in the book about my time at the Great Barrier Reef in the aftermath of the huge [coral reef] die-off there — it was incredibly rapid. [Today] the Amazon is in flames, as are so many tropical forests. These are the major features of our planet and they are rapidly changing.

It’s also enraging. At the presidential Democratic primary debates Joe Biden actually said that the reason [the Obama administration] didn’t take action when they were in office was because they didn’t know how bad things were. But they did know.

At the same time, I also feel a tremendous sense of excitement and hope. Here we are talking about an economy-wide transformation thanks to absolutely incredible grassroots organizing by groups like Sunrise and bold leadership from folks like [Representative] Alexandra Ocasio-Cortez, the Squad and [Senator] Ed Markey.

You write a lot in the book about intersectionality — why things like universal health care and economic justice issues need to be part of action on climate change — which is also a core part of the Green New Deal. Why is that important?

I think there are common-sense reasons and there are strategic reasons.

I was in Puerto Rico after Hurricane Maria and it was obvious that the huge loss of life — studies put the number at around 3,000 or 5,000 — was not as a result of those ferocious winds and waves. People did die from those, but not by the thousands. They died in the thousands because the healthcare system had been systematically neglected, partially privatized, was so brittle and neglected that it was knocked out by the storm along with the electricity system that had also been so systematically neglected and prepared for privatization. And so that was what killed people.

To me the idea that health care is somehow an add-on to what a climate policy should be seems to come from folks who haven’t spent much time in real-world places that have been devastated by climate change-charged disasters.

But then there’s also the strategic reason, which is that we need to build a vision that people will fight for, that people will see benefits from in the here and now. One of the big problems with these kind of market-based responses such as a carbon tax, cap and trade or some rollout of renewables is that for a lot of working people struggling with economic insecurity, these policies have come to be equated with their electricity bill going up at the same time they’re watching the big polluters get completely off the hook.

There have been a lot of ideas over the years about how we should tackle the climate crisis. Why is the Green New Deal getting so much support now?

A lot of different reasons. Some of it has to do with brilliant organizing and courageous leadership from the people already mentioned. And just the energy and the moral clarity of this young generation of climate activists who are really clear that they are fighting for survival. They’re fighting for their futures, and we’re just plain out of time, and they’re not interested in hearing speeches about how seriously politicians take climate change if they don’t actually have a plan that’s in line with the science to cut global emissions in half in the next 11 years.

I think the other thing that’s made people so open to an approach like the Green New Deal — which brings together economic, racial and gender justice with the need to lower emissions very, very quickly — is a widespread sense that the system we have is failing people on multiple fronts.

If we’re going to transform our economy as the IPCC has told us we have to do, then why wouldn’t we transform it in a way that attempts to address and redress all of these other crises at the same time? 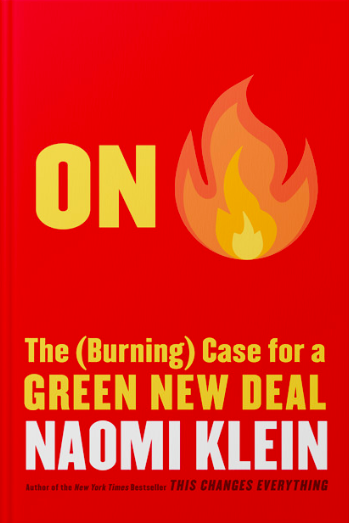 Because we can’t ask people to choose between existential crises. If your family is facing eviction, if you’re afraid your kids are going to get shot by police, these are existential crises for you and it doesn’t help to have environmentalists going, “Yeah, yeah, but we have an existential crisis that’s for the whole world.” It doesn’t matter for you. It’s all existential, right? So we need a plan that says you don’t have to choose.

This would obviously be a big economic and societal shift, and yet we have a president who can’t even stand to see light bulbs getting more efficient. It feels like we have a really long way to go in a very short amount of time. How do you reconcile that?

It feels that way because it’s true. I’m in no way sanguine about our chances. I think that our chances of pulling this off are slim. But there is a pathway. When I wrote This Changes Everything in 2014 there were no major politicians who had any chance of governing who understood the scale of change required.

And now we have candidates that are just trying to outdo each other for who is going to spend more trillions of dollars transforming the economy in the face of the climate crisis.

The pathway for the United States is that you elect somebody to lead the Democratic Party and run against Donald Trump who puts a Green New Deal at the center of their platform. They win against Donald Trump with a clear democratic mandate to bring it in on day one. You try to get the Senate and hold onto the House of Representatives. Then roll momentum from the election into countering the backlash that will obviously come from the vested interests who will try to keep this from happening.

Like I said, I don’t think the chances of success are good, but to me, the stakes are so unimaginably high that if there’s any chance, then the only conversation that matters now is, how are we going to improve our chances? How are we going to build a more powerful coalition?

Right now I think it’s all about getting a candidate coming out of the primaries who understands the urgency, has a compelling, bold Green New Deal platform, and has a proven track record of taking on powerful vested interests. Because you can say you believe in this, but if you don’t have a track record of standing up to corporate power and in fact have the opposite, then you’re not a credible messenger. And there’s no reason to trust you, because this is going to be the political fight of our lives.