The combined extinctions of Hawai‘i’s biodiversity and elements of Hawaiian culture represent the great unravelling of an eco-civilization.

Hawaiʻi, the most remote archipelago on the planet, possesses an exceptional richness of unique species but also has the dubious distinction of being the extinction capital of the world. Many of those extinctions, including scores of native bird species, are all too often directly blamed on Indigenous Hawaiians — a view that first emerged in the early 1980s and one that is still regurgitated in popular media.

Such conclusions, often drawn by scientists from neocolonial cultures, are done so in the absence of scientific evidence — and they hurt. The pain these statements inflict is compounded by the history of countless such insults visited upon Hawai‘i’s Indigenous people by settler colonialists. Directed toward us with an air of superiority from elevated positions of power and authority, these dismissals tell us our own beliefs are wrong — in this case, our belief that our ancestors were good stewards of these islands.

Mirroring numerous false assumptions about our ancestors that have previously been made by white colonizers to diminish Hawaiians’ cultural power, they reflect an institutional racism that permeates science and academia to this day. Examples range from the writings of Ralph Kuykendall, a ranking member of the Hawaiian Historical Society who believed that Hawaiians were intellectually inferior to Caucasians, to the musings of Thor Heyerdahl, who was convinced that Polynesians lacked the technical capacity to navigate Earth’s largest ocean to find the most remote landmasses on the planet 1,000 years before Europeans.

At the core of the notion that Hawaiians initiated the archipelago’s infamous extinctions are assumptions and biases founded in the neoclassical idea that humans are separate from nature. This social construct has morphed into a belief that humans are inherently bad for nature — a way of thinking that has infiltrated science so deeply that the default interpretation of limited data is often that any known extinction in the Holocene is directly attributable to human-induced ecocide.

Such biased interpolations add insult to the psychological injury of witnessing, across generations, the pulling of threads from the tapestry of Hawaiian culture until it resembles a tattered fabric. Hawaiian elders are mourning their losses while simultaneously grappling with both environmental and cultural grief.

Beyond the extinction crisis familiar to most, the reality is that Hawaiʻi has been experiencing a co-extinction crisis that not only affects biodiversity but the health and function of the Indigenous culture to which it’s intrinsically tied.

It’s often joked that if Charles Darwin had landed on the shores of Hawaiʻi instead of the Galapagos, he would instantly have dropped dead of shock.

That’s because all the key ingredients needed to catalyze rapid evolution are found in Hawaiʻi: isolation from founding populations (more than 2,000 miles away from any continent) and a broad range of ecological niches in a relatively small area (27 of 38 lifezones are found in the 6,700 square-mile land area of the Hawaiian archipelago). These conditions allowed for an evolutionary process called “adaptive radiation” to create a biome with more than 90% of its species endemic, or found nowhere else on Earth. Today, Hawaiian honeycreepers, fruit flies and a group of plants called the silversword alliance are textbook examples of adaptive radiation in colleges around the world.

These extinctions affected more than global biodiversity numbers and compromised ecosystems. Each of these species was given a name in the Hawaiian language and played a role in shaping Hawaiian culture. Each contributed to the stories that elders would use to teach their grandchildren about how to be a good person. As such, with each extinction event there were mirrored extinction events in Hawaiian culture. With each species extinction there was an extinction of a word in our language, and quite often an extinction of a practice and a story that we used to teach our grandchildren. Thus the extinction crisis we face here in Hawaiʻi is really a co-extinction crisis that Hawaiians have been contending with for the past 200 years.

Hawai‘i has been described by scholars as one of only nine civilizations in history to independently develop into a state system, and it sustainably managed a population of over one million people.

At its height, Hawaiian society managed a complex knowledge system maintained and cultivated by institutions of higher learning. The Indigenous science within this knowledge system classified and named every plant, vertebrate and macroinvertebrate that existed in Hawaiʻi, as well as cloud formations, winds, rains and rainbows and associated meteorological phenomena. This Indigenous science informed Indigenous resource-management strategies that conserved biodiversity and ecosystem function within Hawaiian systems.

Some of us have described the Hawaiian civilization as an eco-civilization that wove biodiversity and society together in single system. Each of the named things in the biophysical realm had an embedded relationship with Hawaiian culture and a role in this eco-civilization.

Since Hawaiian civilization was not born out of a neoclassical worldview, concepts such as “nature,” “wildlife” and “wilderness” do not exist as words in its language and did not shape the thinking and philosophy of Hawaiian society.

To the contrary, Hawaiian creation chants account for the birthing of the islands, the biodiversity of its lands and seas, and the Hawaiian people — all in that order. As such, they convey the notion that the islands and their biodiversity are kūpuna (a word that means both elders and ancestors). True to the traditions of the Hawaiian family system, these kūpuna were once broadly loved and revered. This is because Hawaiian culture sees the land and its biodiversity as kin, with no need to separate the two.

How We Lost Our Eco-Culture

Much of this began to unravel in the 19th century, shortly after contact. The Hawaiian population collapsed by 90% after the introduction of foreign diseases. The colonizing influences of Christianity and capitalism worked in concert to dissolve the Hawaiian laws that were in place to protect biodiversity and habitats, and ultimately transformed Hawaiʻi into an engine for the coalescing global economy.

Concurrently the introduction of mosquitos, mosquito-borne diseases, and predators such as mongooses, rats and cats attacked our bird populations. Introduced ungulates became feral and, together with newly introduced invasive plants, transformed forests, wetlands and other habitats that supported the Hawaiian eco-civilization. Extinctions shot through the roof, both in the realms of biodiversity, linguistics and Indigenous practices.

Thus began the co-extinction between Hawaiian culture and Hawaiʻi’s biodiversity, and the great unravelling of the Hawaiian eco-civilization was underway. Hawaiian language and knowledge systems started to fade, and the material culture that was built on Hawaiʻi’s biodiversity began to crumble. Hawaiians experienced an overwhelming sense of environmental grief that was compounded by cultural grief swirling around their families and communities, and thus began the intergenerational trauma Hawaiian communities struggle with today.

Through this dual conquest, Hawaiian society found itself nearly wiped out. Today, thanks to colonization by foreigners, Indigenous Hawaiians represent a minority in contemporary society — in both population numbers and political influence.

And colonialism is hardly a thing of the past. In the later decades of the 20th century, institutional education systems taught conservation as if it was a notion brought to Hawaiʻi as a gift of the “western civilization.” In this education system children like me were taught that the Hawaiians caused these extinctions by overhunting and deforestation, and presented conservationists born in another land as those who came to save Hawaiʻi from us.

While the inadvertent introduction 1,000 years ago of the Polynesian rat— Hawai‘i’s first invasive species — certainly altered ecosystem function, which then resulted in a handful of notable extinctions, research since the turn of the century increasingly points to the introduction of black rats, mosquitos (and mosquito-borne diseases) and cats (who have now gone feral) — all introduced by foreigners in the 19th century — as the major drivers of extinctions in Hawai‘i. As for the deforestation that was originally blamed on Hawaiian ecocide, that didn’t happen until the 19th century either, as the high demand for fuel for steam engines and the push to convert hundreds of thousands of acres to ranching and plantations spelled disaster for Hawai‘i’s forests and wetlands.

The Rise of Restoration

The 1970s was a pivotal time in Hawaiʻi. After generations of miseducation, cultural appropriation by the tourism industry, and the witnessing of sacred islands being used as target practice by the US Navy, efforts to revive the last vestiges of Hawaiian culture coalesced into a new Hawaiian renaissance. A growing sense of Indigenous agency — founded on the concept of aloha ʻāina (“love of the land”) — led to a revival of Hawaiian language, arts, material culture, philosophy and spirituality.

In the 21st century, Hawaiian-led conservation efforts across the archipelago have coalesced around the notion of “biocultural restoration” as an antidote to the influences of colonization that led to the collapse of the Hawaiian eco-civilization. Colonization is a process that severs relationships between Indigenous people and their language, their ancestral places, and the biodiversity that shaped their cultural identity. Biocultural restoration focuses on restoring relationships between Indigenous people and their places, as well as between them and the biodiversity that shaped the language and identities of their ancestors. Biocultural restoration is built on the notion that everything in the system is interconnected, as are the problems we perceive and the solutions to them.

Extinctions, collapses in species abundance, habitat degradation, disintegration of family systems and the disenfranchisement of communities all trace back to the imposition of the notion that humanity and nature are separate, and are exacerbated by the solutions promulgated by conventional approaches to conservation that aspires to save nature from humans.

To heal these scars, the world must accept the truth: We Indigenous peoples were not the cause of the mass extinctions witnessed by our ancestors. The reality is that Euro-American colonization, the animals and diseases they brought with them, as well as the philosophies and practices that have justified deforestation and the draining of wetlands — all of which are the antithesis of sustainability — caused more extinctions than Polynesian rats ever have.

After more than 40 years of the American approach not working, it’s high time we try something different. Now’s the moment for us to learn from our eco-civilizations of the past to ensure we can have a civilization in our future. 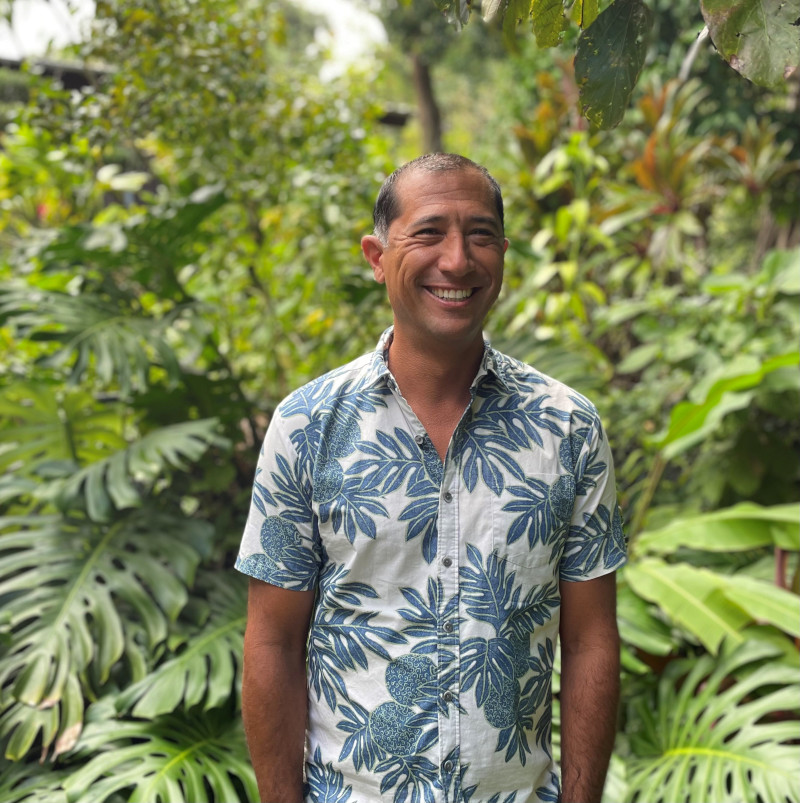 is a multidisciplinary ecologist who has focused his professional career and research on supporting and studying large-scale biocultural restoration of social-ecological systems in Hawaiʻi. He is also active in the policy sphere in the realms of conservation, sustainability and Indigenous rights.
https://manoa.hawaii.edu/biocultural/kawika-winter/