A container of waste is excavated from an underground storage trench at the Hanford Site. Photo: Department of Energy, public domain.

A new book investigates the toxic legacy of Hanford, the Washington state facility that produced plutonium for nuclear weapons.

The most polluted place in the United States — perhaps the world — is one most people don’t even know. Hanford Nuclear Site sits in the flat lands of eastern Washington. The facility — one of three sites that made up the government’s covert Manhattan Project — produced plutonium for Fat Man, the atomic bomb dropped on Nagasaki during World War II. And it continued producing plutonium for weapons for decades after the war, helping to fuel the Cold War nuclear arms race.

Today Hanford — home to 56 million gallons of nuclear waste, leaking storage tanks, and contaminated soil — is an environmental disaster and a catastrophe-in-waiting.

It’s “the costliest environmental remediation project the world has ever seen and, arguably, the most contaminated place on the entire planet,” writes journalist Joshua Frank in the new book, Atomic Days: The Untold Story of the Most Toxic Place in America.

Frank has worked to change that, beginning with a series of blockbuster investigations published in Seattle Weekly a decade ago. Atomic Days offers an even fuller picture of the ecological threats posed by Hanford and its failed remediation.

The Revelator spoke with him about the environmental consequences, the botched cleanup operation, and what comes next.

Why is the most polluted place in the country so little known?

We have to understand what it was born out of, which was the Manhattan Project. There were three locations picked — Los Alamos [N.M.], Oak Ridge [Tenn.] and Hanford — to build the nuclear program.

Hanford was picked to produce plutonium and it ran for four decades, from World War II through the Cold War in the late 80s. For decades people that lived in and around Hanford didn’t know what was really going on there. It was run as a covert military operation. Even now, it’s still very much run like a covert operation because of the dangers that exist with the potential for an attack on one of the nuclear waste tanks.

It wasn’t even until the 80s that we started learning more about a lot of the stuff that had happened during its operation as far as leaks go, near accidents, intentional releases of radioactive material to test wind patterns, or potential biological weapons. 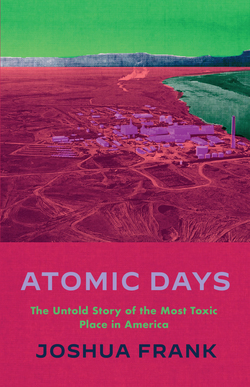 To this day a lot of stuff is still under wraps. The government still isn’t letting us in to understand the full totality of what the Hanford project has been for the Northwest.

What are the known environmental dangers?

There are 177 underground tanks that hold 56 million gallons of nuclear waste. We know that 67 of those tanks have leaked in the past into the groundwater that feeds the Columbia River.

We know that during its operation in the 50s and 60s the government was monitoring the water in the Columbia River, and even at the mouth of the Columbia they were finding radioactive fish. So we know that there have been leaks that made it to the river.

Right now, we know that there are two tanks currently leaking. The Washington Department of Ecology and the U.S. Department of Energy know about these leaks, but they can’t do anything about them because there’s no other place to safely put the waste.

Their answer right now is to throw tarps over these tanks so that when it rains it’s not pushing that radioactivity into the groundwater.

During its operation, there were also hundreds of billions of gallons of chemicals and other radioactive waste that were just dumped into the soil.

There’s also the potential for an explosion to happen in one of these tanks. One whistleblower I spoke to, Donald Alexander, is a retired Department of Energy scientist who worked at Hanford for a really long time. What he was most concerned about was a hydrogen explosion — pressure building up in the tanks that would release radioactivity throughout the Northwest.

A similar accident happened at a Soviet facility called Mayak in 1957. The Soviets didn’t let the public know what had happened because it was a covert production site for plutonium.

The CIA found out about it a few years after the fact. But by then the damage had been done. Hundreds of square miles were eviscerated and communities were completely destroyed. The long-term impacts are still being felt there because radiation lasts millennia.

Donald Alexander was part of the delegation that went out there and looked at the impacts and the damage that happened. He came back really concerned that something similar could happen at Hanford.

He’s concerned that the longer the waste sits in storage tanks, the more the risk increases.

The big thing right now is trying to get all this waste vitrified, which is turning it into glass so it can be stored safely and permanently. The government thought that could be done in four years, but that was 30 years ago now.

I would argue, when it comes to vitrification, they’ve made almost no progress. So far, we’ve spent $40 billion to build a huge facility that doesn’t even work yet. A couple of the whistleblowers who I talked to tell me that they don’t think it’ll ever work.

I hope they’re wrong, but it seems to be so far that they’re right.

Bechtel is the big contractor for this “vit plant,” as they call it. But they have a really bad track record and are well known for reaping the spoils of U.S. military ventures all over the globe.

In October they had a test facility up and running that was going to do a run of vitrification for low-level radioactive waste. They basically had a ribbon cutting for this big machine and it ran for a week, then overheated, and they had to shut it down.

So even their test run for vitrification didn’t work.

Bechtel is a privately owned corporation and we’re spending billions of dollars paying this company to not get the job done. It’s a big mess.

Are the people who live nearby concerned?

It’s interesting going to Richland because they still celebrate the atomic age. There isn’t any real talk about how polluted the place is, and there’s no mention of what the bomb did to the Japanese.

But there are also other communities nearby that have been deeply involved in trying to remediate the site. The Yakama Nation has been very active, as well as other organizations, like Columbia Riverkeeper in Hood River and Hanford Challenge up in Seattle.

What could help? Are there elected officials or others watchdogging this?

When it comes to elected officials on both sides of the aisle, they’re in lockstep that we need to keep the money flowing for the cleanup, but they’re not calling for more accountability.

As far as agencies go, I would say the Washington Department of Ecology is by far the most involved and is very critical of the operation, but they’re just a state agency. They don’t have a ton of power.

The Department of Energy, I have been told over and over again, is just completely understaffed and underfunded. They don’t have the personnel and expertise to manage [the Hanford cleanup], which is frightening really.

I would argue it’s going to take more ingenuity and more expertise to clean it up than it took to develop the bomb in the first place. I think we should be putting our best people on this. I think that ultimately, in a perfect world, we wouldn’t have to privately contract this stuff out. The government’s not capable of doing it themselves, but they certainly are capable of overseeing it properly.

I’d like to see more accountability. I’d like to see some congressional hearings. At a very basic level, I think everybody can contact their congressperson and ask them if they know about it and where they stand.

Has writing this book changed your thoughts about nuclear power?

I went into the book being a critic of nuclear power, but coming out of the book, I was way more than just a critic. The big problem in relation to the Hanford project is nuclear waste. And it’s the same with nuclear power. In a nuclear reactor, you’re going to have plutonium and other byproducts of the process. Plutonium, for instance, lasts 250,000 years. Every nuclear reactor produces this stuff. And we don’t have an answer for where to put it.

Nuclear power is also very expensive. It’s very slow to roll out. So as far as climate change goes, it’s just not going to happen fast enough. And then there’s a myth that it’s carbon neutral. It’s not. Uranium, which is integral to the nuclear process, is mined and to extract uranium from uranium ore, it’s very carbon intensive.

There’s a lot of reasons to oppose nuclear power. But nuclear waste, to me, is the one that really sticks out.