Will the Trump administration’s recent changes to the implementation of the Endangered Species Act complicate the delicate strategy of grizzly restoration in this remote Washington wilderness?

Jack Oelfke, chief of natural and cultural resources for North Cascades National Park, sits outside behind the park’s main visitor center and mulls the challenges of establishing a healthy grizzly bear population in northwest Washington.

Oelfke has been working on wilderness issues for decades, and grizzly reintroduction has been his primary focus the past five years. Issues as culturally complicated as grizzles, he says, aren’t solved by time and focus alone.

“Reintroduction might be easier with some species — none of them are easy — but with the grizzlies the potential threats are there,” Oelfke says. “But if we want to honor the ethic of the Endangered Species Act, we need to reintroduce the grizzly.”

Grizzlies were first protected by the Act in 1975 after being nearly wiped out from most of their range in the 19th century. At the time the largest — and still the best-known — grizzly population in the contiguous United States lived in Yellowstone National Park. But small populations also persisted in four other areas along the Canadian border, including the North Cascades, which in 1991 was declared a suitable space to further grow and restore the species’ population. The remote, 9,800-square-mile ecosystem, a combination of glacier-cut peaks and thick virgin forests, is located under three hours’ drive from Seattle but remains relatively undisturbed.

Reestablishing the species here hasn’t moved forward much in the past three decades. Biologists estimate that fewer than ten grizzlies roam the region, just a fraction of the 200 bears that would constitute a biologically restored, genetically healthy population.

But efforts to boost those numbers continue — albeit in a halting manner. After years of development, a plan to bring more grizzlies to the North Cascades was opened for public comment period in 2017. Under the plan reintroduction could take one of four forms: no action; ecosystem evaluation restoration (two years of capturing, transporting and releasing bears into the North Cascades complex); incremental restoration (moving more bears to the area more slowly); or expedited restoration (restoring the population every summer and fall until the goal of 200 bears is reached). The comment period closed ahead of schedule but it was recently re-opened again, with submissions due in October 2019.

What does the near future hold for this plan? Oelfke appears cautious when speaking about the federal government’s recent reinterpretation of the Endangered Species Act — and with good reason. Two changes to the way the Act will be implemented could cause complications for reintroduction efforts.

First, the Trump administration has redefined how the Act will respond to conditions that species may face in the “foreseeable future,” making it harder to protect them from threats related to climate change. Second, it has added a requirement for considering the economic impact of reintroducing endangered or threatened species.

Despite the potential political pitfalls, Oelfke says he’s bullish about the future for grizzlies in the Cascades because of their remarkable adaptability and diverse diet.

“If you look at the historic range of grizzly bears, it goes far south well into Mexico and well into the Great Plains,” he says. He adds that the bears’ adaptability means grizzlies in the Cascades should do fairly well under current climate change scenarios, unlike some other species in the region that depend upon specific habitat conditions — snow-dependent wolverines, for example, which need around ten feet of snow to build their dens. Climate change models vary, as does the perception of how climate change will threaten grizzlies in the region, but what remains fixed is the ecosystem requirements for grizzlies — for all species, really — to have a large and diverse genetic pool.

As far as interpreting the economic impacts of grizzlies, Oelfke says it’s more about familiar battles of the past than about the future of climate change.

“Those who have expressed concern about this reintroduction are the cattle and sheep industry, because they fear loss of livestock,” he says. “Around the ecosystems where grizzlies exist, such as Yellowstone, there is some livestock depredation. But I would argue it’s quite small.”

The sprawling orchard industry on the southeastern boundary of the ecosystem has also expressed worries about Ursus arctos horribilis roaming near their apples, peaches and cherries, but Oelfke notes that many of these sites already use electric fencing to successfully thwart the black bears that also live in the region.

Although the federal government seems intent on putting a price tag on grizzlies, the economic value of a native species might actually run somewhere between priceless and infinite due to the ecosystem services the bears would provide. For example, grizzly droppings disperse seeds as the animals roam throughout the forest, a process that also helps fertilize the ground with rich nutrients from salmon.

Oelfke, who worked in the backcountry of Glacier National Park for ten years, says he used to see the influence of grizzlies “all the time. They’d churn up the ground, like rototilling gardens of subalpine meadow, which has very positive effects on the ecosystem.”

The efforts in North Cascades draw on years of experience restoring grizzlies in other parts of the country such as the Cabinet-Yaak area of Montana, where Jessie Grossman says she’s seen firsthand how the Endangered Species Act has helped to protect the species.

Grizzlies were almost extinct within the Cabinet-Yaak recovery zone 30 years ago. “They were in single digits,” says Grossman, project coordinator for the Yellowstone to Yukon Initiative, an organization that seeks to establish habitat connectivity between the United States and Canada. “They could have been extinct in this part of the world without the Endangered Species Act. The way it was written has done a lot of good.” Like the North Cascades, Cabinet-Yaak is still an active grizzly recovery area, with only about 50 bears.

The Trump administration’s changes to the Endangered Species Act could put that fragile recovery and others like it at risk.

“The Act is really important to conservation successes,” she says. “It allowed not only reintroduction but recovery of a lot of species. Any erosion of that Act is an erosion of a potential to protect or recover an important species.”

Grossman says she knows not everyone shares her personal affinity for grizzlies, but she sees them as a charismatic species that’s emblematic of an overall healthy ecosystem.

No matter what happens, the North Cascades remains important to the future of the grizzly species as a whole. Yellowstone grizzlies were recently placed back under the protection of the Endangered Species Act, in no small part due to the threat that population faces from climate change. Protecting and restoring the bears in other locations will help ensure the species’ long-term survival.

Back at the North Cascades Visitor Center, I see park ranger Marissa Bluestein wrapping up a demonstration discussing how climate change has already affected the wolverine population in the park. Even if grizzlies are more adaptable than other species to climate change, the overall ecosystem is not. She crystalized the crisis in one question:

“What would you do if your home kept shrinking?” 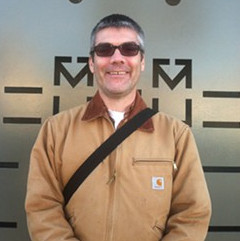 has written for several periodicals, including The Bay City Beacon, SF Weekly and The San Francisco Chronicle. His essay "The Road Less: John Huston, Blue-Footed Boobies and Me" earned a 2017 Bay Area Travel Writers award, and his short story "Of Subareas and Public Bathrooms" was included in the California Prose Directory. His memoir "Loud Memories Of A Quiet Life" is available through OutPost19 Press. He is a member of the Society of Environmental Journalists and teaches journalism, creative writing and composition at the Academy of Art University in San Francisco.
https://muckrack.com/tom-molanphy