A new book asks, “Can we feed the world without destroying it?” The answers might surprise you.

The world needs to change the way it eats, not just as individuals but as a society.

That’s the message from a groundbreaking report issued last month by the EAT-Lancet Commission, which made a series of societal recommendations to help the world’s ever-increasing human population ensure its food security in the face of global warming.

The recommendations are all designed to accommodate a planet that is projected to contain 10 billion people by the year 2050. They include switching to a diet that’s low in meat and sugar but higher in whole grains, fruits and vegetables; cutting food waste; reducing fossil fuel use and emissions; and incentivizing small and medium farming.

The changes, the report said, would lead to a healthier planet and healthier people, while also helping the more than 820 million people currently suffering from chronic hunger.

Coincidentally, the report came out the same week as a challenging new book that makes many of the same recommendations, while also presenting some contrasting and complementary ideas. 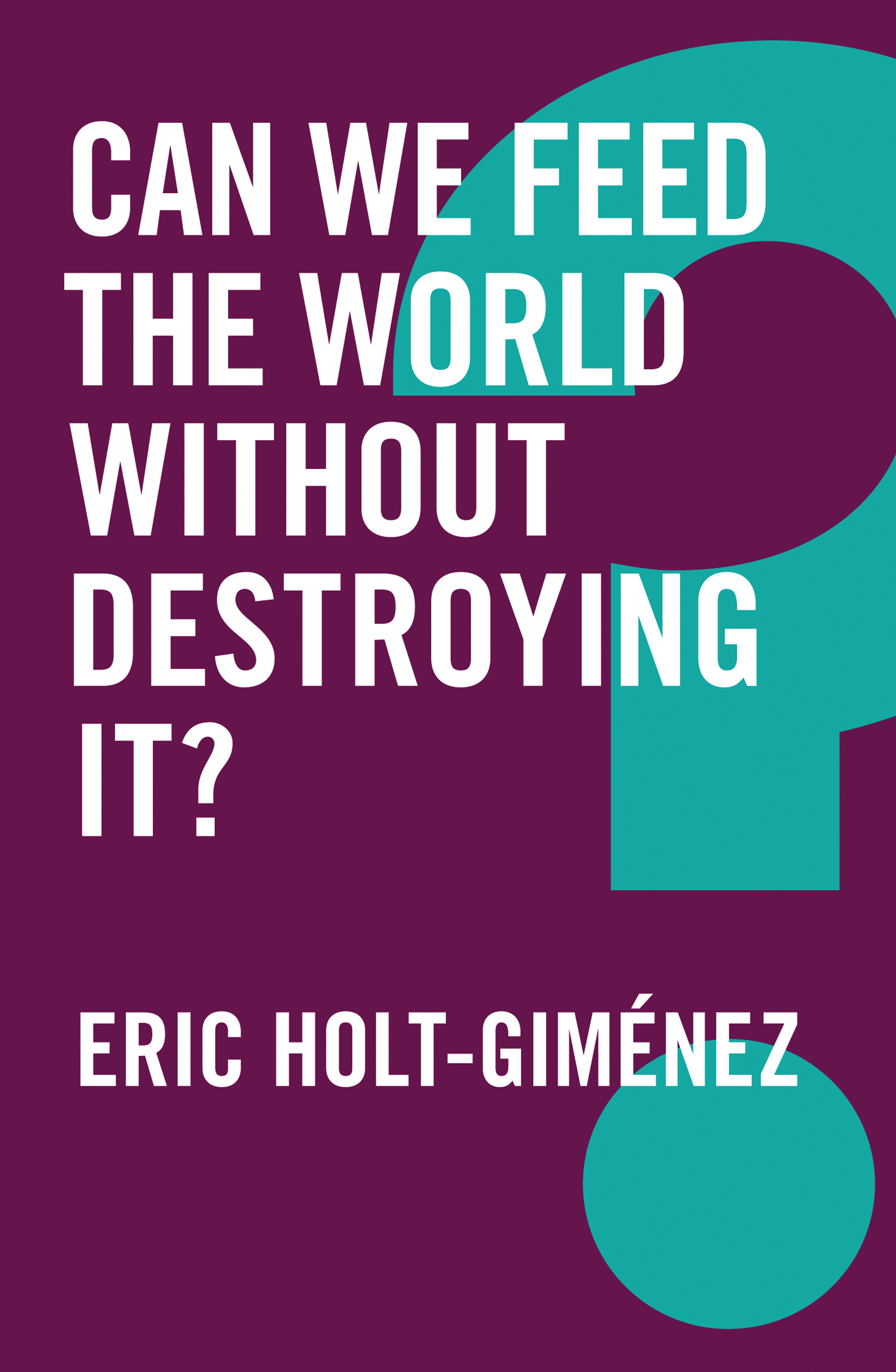 According to Can We Feed the World Without Destroying It?, written by food activist Eric Holt-Giménez and published by Polity Press, we already produce more than enough food to feed everyone on the planet, and we’re gearing up to grow even more to accommodate the projected increase in human population.

All that food comes with multiple costs, including climate change, drought, water contamination, habitat loss and species extinctions — which themselves put the very future of food at risk. Holt- Giménez writes, “our greenhouse-gas-spewing industrial food system has entered a dangerous negative feedback loop. The way we produce and consume food is undermining our ability to produce food at all.”

So where is all this food if so many people are still going hungry? Holt- Giménez — who says as many as 2.5 billion people are hungry — argues that hunger is less a problem of production and more a function of our global food system and poverty. “People are going hungry not because of lack of food,” he writes, “but because they are too poor to buy it.”

Much of that poverty, Holt- Giménez claims, is actually caused by the agricultural industry:

“Commercial farmers don’t produce food to feed people: they produce food to sell on the market, where they compete with other food producers. Whoever can produce the most food at the cheapest price will have the most market power — power to flood markets and push out other producers. When smaller, subsistence farmers who are actually growing most of the world’s food go broke, they often go hungry.”

Perhaps more importantly, he writes, the commercial agricultural system forces farmers to grow monocultures for the global market, which doesn’t help anyone living on or near the farms themselves. “Farmers are nutrient-deficient,” he writes, “because they no longer grow a balanced diet.”

And much of what the world produces is never consumed. About 30 to 50 percent of the world’s food rots on the fields or in landfills, resulting in wasted water and energy and excessive production of greenhouse gases — which bring us back to the climate-change threat.

What’s the root cause of these problems? Holt- Giménez places the blame squarely on capitalism. The global food system, he writes:

“…is working precisely as a capitalist food system is supposed to work: it expands constantly, concentrating wealth in a few, powerful monopolies, while transferring all the social and environmental costs onto society. These costs are borne inequitably by women, the poor, indigenous peoples, people of color, the working class, rural communities — the most exploited and vulnerable.”

He calls this the “hunger-industrial complex,” a system that guarantees people will go hungry by refusing to address low wages and economic inequality.

On top of that, and in contrast to the Lancet report, Holt- Giménez argues that the world population isn’t going to explode by 2050. It’s more likely, he writes, to level off, which presents two problems for capitalism: “the specter of stagnant population growth and of communities too poor to buy the food being produced.”

So what are the solutions? Holt- Giménez says hunger and famine will only be solved by putting political power back in the hands of the world’s poorest people. In other words, it requires transforming the concept of food security into one of food sovereignty.

More broadly, he argues that a food movement could “catalyze society to demand the deep systemic reforms on which our collective future depends.” This would require linking food with other concepts such as climate justice, the women’s movement and the indigenous rights movement. That linkage would help address agriculture’s contribution to the climate crisis.

Holt-Giménez lays out a few guidelines for making this possible, including embracing the “polluter pays” principle, where food production will need to be responsible for its water and soil use and greenhouse gas emissions. Reducing livestock production and meat consumption would refocus the grain industry toward producing human food, reduce greenhouse gas emissions, and allow farmers to diversify their crops. Providing farmers with living wages would also give communities the financial support they need while removing the incentive for overproduction. Finally, he calls for the dismantling of the world’s food, agriculture and chemical monopolies as another way to protect farmers and consumers.

Like the EAT-Lancet report, Can We Feed the World presents a challenging set of ideas and science and facts to back up its case. As Holt-Giménez writes, global warming threatens the world’s food, while the world’s food system threatens us with worsening climate change and ever-increasing inequality. The two publications may not completely agree, but they do present a unified message that immediate change is needed.