I became a plaintiff in a lawsuit for the Clear Lake hitch — a fish I’ve never seen. As the species quickly disappears, how much longer will it swim the waters of California?

This spring, in response to reports of dead and dying fish, teams of government wildlife staff and Tribal environmental specialists grabbed their backpack electrofishers, dip nets, buckets, aerated coolers and rubber gloves. For weeks they searched along drought-stressed creeks to save what fish they could find. One by one, they gently stunned and netted 360 adults and fry (juveniles) in rapidly diminishing pools before transporting them for release into a nearby lake.

This was not the first such rescue — similar efforts to save the rare and rapidly declining Clear Lake hitch (Lavinia exilicaulda chi) took place in 2014, 2016 and 2018.

The Clear Lake hitch is one of 13 species endemic to California’s largest, oldest and now most toxic lake. Known as chi to local tribes, the hitch teeter on the edge of extinction, a fate to which their cousins, two other formerly endemic lake species — the thicktail chub (last seen in 1938) and the Clear Lake splittail (last seen in the 1970s) — have already succumbed.

These same forces affect other lake fish, their benthic and shoreline tule reed habitats, and the cultural core of the hitch’s first consumers and venerators: the Pomo. These Indigenous peoples, with whom I work as an ethnoecologist, have occupied the full extent of Clear Lake’s watershed since time immemorial, yet in contemporary times their federal allocated territories have shrunk to under five miles of a 120-mile shoreline.

State Protection, But Not Good Enough

In the summer of 2014, after the worst hitch spawning records at the time, the California Fish and Game Commission designated the hitch as a threatened species. This overdue action came in response to a Center for Biological Diversity* petition accompanied by the agency’s own reports of an 92% loss of hitch spawning habit. It also followed a meeting filled with a vanload of tribal members providing public testimony, including a short summary video I produced and thrust into their hands at the last minute.

* (Editor’s note: The Revelator is published by, but editorially independent from, the Center for Biological Diversity.)

While the threatened species designation was noteworthy, it remains a proverbial drop in the bucket.

As the state’s most imperiled fish, Clear Lake hitch outrank 35 other extinction-prone species and subspecies of fish on California’s threatened and endangered species list.

The state has achieved some conservation advances in the past few years. The listing of the hitch, combined with Big Valley Rancheria’s pathbreaking water-quality monitoring program showing off-the-charts cyanotoxin events on Clear Lake, led to the passage of Assembly Bill 707 and the creation of the Blue Ribbon Committee for the Rehabilitation of Clear Lake, accompanied by a $22 million investment for research and restoration.

But it’s not enough.

Where they remain, the hitch struggle to survive amidst all the indignities we heap upon our waterways: endless trash and pollutants, dams, barriers, and roadways, as if wild-flowing waters are dumpsters and construction zones instead of homesteads and nurseries that contain vulnerable, oxygen-dependent beings who swim, forage, mate, and raise their young.

Last year biologists didn’t spot a single juvenile hitch. We don’t know if this was due to infrequent monitoring during the pandemic, severely low counts of reproductive adults in 2017-2019, or creek-spawned fry prevented from making the journey to Clear Lake.

Given the hitch’s typical life span of 5-7 years, one field biologist compared this five-year juvenile recruitment failure to the equivalent of a regional human population going childless for 50 years.

The catastrophic decline of the hitch follows a familiar trope, one repeated for salmon, steelhead and sturgeon — all native fish intrinsically bound to Tribal lifeways. In each case, there were once millions upon millions of these fish, so abundant they overflowed every waterway, so many a person couldn’t walk across the creek without stepping on them. Then came Euro-American settlers, filled with greed for quick profits, ecological ignorance and cultural arrogance. Four generations later these magnificent fish have been extirpated from most waterways or approach single- or double-digit counts where they have managed to persist.

From Anger to Action

Scientists are not normally known for displaying rage, but we left normal several decades ago, the moment the Keeling Curve, measuring atmospheric carbon dioxide levels, began its exponential climb.

Frustrated with the disconnect between several thousand pages of scientific reports and the urgent need for action, I joined the Center for Biological Diversity’s 2021 lawsuit against the U.S. Fish and Wildlife Service challenging the agency’s failure to protect the hitch.

I became a plaintiff in a lawsuit for a fish I’ve never seen.

“[The Service’s failure to act] really hurt me because I worked all these years to help protect the hitch, and to find out that it wasn’t even considered or even halfway there, I felt bad for Tribal members who don’t have access to the fish to eat, as well as the fact that the hitch would no longer just be there for a food source. Just knowing that the system is broken is a sad thing.”

The hitch belongs to the minnow family, reaching the length of an average hand span at adulthood. For a decent meal, you’d need to cook up three or four at least, a number I could easily eat straight from the frying pan — a habit I’ve indulged with surf smelt at a Tolowa Dee-Ni fish camp, another rapidly diminishing, culturally important species with associated traditions for Native California Tribes.

Another standing declarant in the lawsuit — Big Valley Rancheria tribal historic preservation officer Ron Montez, Sr. — shared this account of the importance of chi (hitch) and their decline:

“In the old days people used to come over from nearby areas like Sonoma, Napa, Mendocino and the Sacramento Valley to camp out along the creeks, and there would be hundreds of Native people catching chi. People would shout, “The chi are running! Look at the fish over there! Chi! Chi!” and we would grab a bucket or a sack or even just our t-shirts.

There were so many chi. Everyone was excited because fish were jumping and flopping all over the place. I remember having so much fun — I would be soaking wet from diving after them, catching them, and throwing fish to the younger ones to put in the bucket — we were just laughing and having a great time.

Once we got enough fish, it was time to quit. After that we would take the fish back to the reservation, and then it was a community time where everybody would sit around and clean fish together. We would supply fish to the mothers and aunties and people cleaning them. I remember that everybody was happy because we knew we had fish — we knew we had some chi — and it brought a good feeling that we had food now.

Chi were still running back then — in the 1960s, 70s, even 80s — but it was getting less and less. You could still hear the call that “the chi is running” and everybody still did the same thing and took off to gather them. Now … every once in a while somebody tells me, “Oh yeah, the chi ran for a little bit over in this creek over here,” or “yeah, we got a few, but they are all gone now.”

The abundance is gone. The excitement and that cultural aspect of it is gone. It is a sadness now that we feel whenever we talk about chi because they are not like they used to be. That community relationship around them is not there anymore.”

These days, since the state listing of hitch makes fishing for them illegal, the primary ways local Tribes can get their hands on chi is through applying for scientific collection research permits or during urgent rescue operations — when local creek waters are too hot, too toxic, or have too little oxygen in them and a fish kill is imminent.

In April 2022, in response to the lawsuit, the Fish and Wildlife Service agreed to “re-evaluate the conservation status of the Clear Lake Hitch” and develop a new 12-month finding to consider Endangered Species Act protection. Currently the agency is holding out until January 2025 to do so, treating the hitch as yet another species to be added to its National Listing Workplan for 2022-2027, which already contains 310 species out of 500 needing review.

This ruling brings to mind the several decades of parallel government heel-dragging on the decommissioning of four hydroelectric facilities on the Klamath River, dam removals essential to securing the future of salmon and orca. Two more devasting spring runs on Clear Lake’s tributaries without federal protection could prove fatal.

The Clear Lake hitch, and the peoples whose lifeways are intertwined with its existence, can’t wait until 2025. Reams of historical and contemporary data on hitch populations already exist, and there’s no statutory threshold definition or specific quantification of the level of data necessary — listing decisions always depend on “the best available science.”

There is one person who can order the Fish and Wildlife Service to step up before we no longer have a choice. Given the power of the secretary of the Interior to determine when a species is to be listed as endangered, the Honorable Deb Haaland could make a difference for this invisible species with the stroke of a pen — before it disappears into extinction like its long-lost cousins.

Why Indigenous Knowledge Matters to the Future of Fisheries 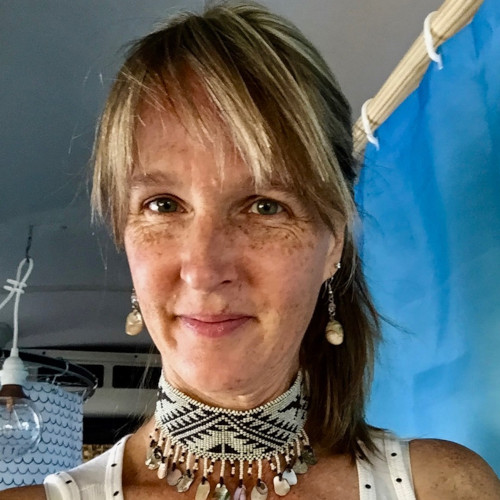 Jeanine Pfeiffer is an ethnoecologist focusing on biocultural diversity: the intrinsic connections between nature and culture. Her award-winning essays, research articles, and poems have been nominated for the Pushcart Prize, anthologized, published in literary magazines and scientific journals, broadcast over radio and exhibited in art galleries.
http://twitter.com/JeaninePfeiffer http://jeaninepfeiffer.com/