The following is excerpted from The Cougar Conundrum: Sharing the World with a Successful Predator.

One popular approach to increasing tolerance for large predators like mountain lions is to speak to people’s wallet–mind connection rather than their hearts. Ecosystem services are benefits provided by wildlife and other nature that specifically benefit people. Ideally, these services can be quantified to emphasize their importance. Brazilian free-tailed bats, for example, provide millions of dollars in pest control to the agricultural sector each year, both by reducing the need for more pesticides and by reducing pest damage across the United States and Mexico. Globally, animals provide more than $200 billion in pollination services to maintain and grow the most important food crops that feed the human population.

The general idea behind reporting ecosystem services is that everyday people unconcerned about wildlife perk up when they hear about their economic value; subsequently, they increase their tolerance for wildlife and begin to appreciate the animals around them. 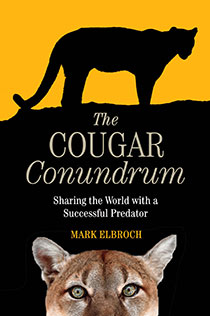 The ecosystem services strategy has only rarely been used for mountain lions. The best example is that presented by wildlife ecologist Sophie Gilbert and her team at the University of Idaho. They not only estimated the economic value of services provided by mountain lions by reducing deer–vehicle collisions in dollars, they also measured it in human lives.

To accomplish this, they completed two different analyses. First, they calculated the economic contributions of the nascent population of mountain lions in the Black Hills of South Dakota, by comparing the number of deer–vehicle strikes before and after mountain lions re-established a breeding population. Once in place, resident mountain lions reduced deer collisions by 9%, which translates to an annual savings of approximately $1.1 million for the people of South Dakota. That’s an impressive savings.

Second, Gilbert’s team conducted a predictive calculation of what mountain lions could save people should they re-establish in the East. They predicted that mountain lions would reduce deer numbers by 22%, after which the deer density would stabilize again at a reduced (and healthier) number.

Over thirty years, the effects of re-established mountain lions on deer populations would result in 21,400 fewer injuries to people and 155 fewer human fatalities, and it would avert $2.13 billion spent in damages and reparation. Contemplating these figures makes one’s head spin.

In another ecosystem services study, researchers followed nine mountain lions in Colorado and discovered that they were disproportionately killing deer infected with chronic wasting disease (CWD).   This is a debilitating and contagious neurological disease in which animals suffer slow deterioration of the brain, resulting in abnormal behavior, lethargy, reduced awareness of one’s environment, starvation, and death. Game managers are particularly worried about CWD as it spreads from deer to elk and moose. The only way to stop, or at least slow, the spread of CWD is to hire sharpshooters to prune sick deer from the herd. If it’s true that mountain lions target CWD-infected deer (and we’d need to replicate the study with larger sample sizes to be sure), mountain lions could save state agencies the costs of hiring sharpshooters, and, more importantly, save untold thousands of deer, elk, and moose from terrible deaths. This is something even deer and elk hunters can appreciate.

The counterargument to citing ecosystem services as a conservation strategy to convince people that large predators are good is that it may backfire for species for which we lack information. The ecosystem services argument lays the burden upon biologists to get their act together and document all the positive roles animals play in natural systems so that they can then collaborate with economists to estimate each species’ net value. For mountain lions, most research is dictated by state agencies with no interest in permitting or funding this sort of study, and so it’s unlikely we’ll have a repertoire of ecosystem services research upon which to draw.

Keeping with the theme of speaking to people’s wallets, some researchers and conservation organizations bypass the ecological research and go straight to providing a financial incentive to people who conserve mountain lions and other predators. For example, the Northern Jaguar Project in Sonora, Mexico, with support from the American NGO Defenders of Wildlife, pays ranchers for photographs of carnivores captured on their properties: $300 for a jaguar, $150 for an ocelot, and $100 for a mountain lion.

This is real money in that part of Mexico, and it provides incentive to ranchers to keep animals alive. Carnivores can also continue to pay out over time as they are photographed again and again. In addition, such a system provides an incentive for ranchers to see wild game flourish on their land, which might in turn attract more wild cats, generating additional income.

The problem becomes in ensuring that the pot of money never runs dry — what happens when the ranchers aren’t paid to maintain carnivores on their lands? It’s referred to as the “white elephant” phenomenon in some circles when an NGO with the best of intentions invests in a community for a few years. Then the money dries up, after which people return to the way they were living prior to the “intervention.”

In contrast, though, some ranchers come to value the photos of rare species more than the cash incentive — they are trophies of a sort, and many ranchers feel pride in knowing they support healthy ecosystems.

Nevertheless, the heart of the counterargument to ecosystem services and other wallet-based approaches is that they may discourage people from recognizing the intrinsic value of wildlife above and beyond what they can do for us. Isn’t it a better approach to improving tolerance just to get people to fall in love with mountain lions, rather than to invest the money and time needed to estimate their economic value to human communities and healthy ecosystems?

is an internationally recognized expert on carnivores and mountain lions. He is Puma Program Director for Panthera, the global wild cat conservation organization. He is a regular contributor to National Geographic’s CatWatch Blog and has authored and coauthored 10 books on natural history.
https://www.instagram.com/markelbroch