Hope is often touted as an important ingredient in conservation success. Our research found that it’s vital — but only if it’s combined with another key element.

Hope — it seems to be everywhere these days. Humans routinely hope for all sorts of stuff — easy-to-assemble IKEA furniture, vaccines against COVID-19, economically painless solutions to global warming. Some believe we’re born with an “innate” sense of hope, and according to positive psychologist Barbara Frederickson, hope is one of the “top ten positive emotions.” It’s even been said that “when hope dies in a person, physical death is not far off.”

Among conservation workers, activists and anyone concerned with the climate crisis, hope is called upon to do particularly heavy lifting. A recent Google search on the phrase “hope and conservation” returned a whopping 779,000 results. In the top result, conservation journalist Jeremy Hance asks “Has hope become the most endangered species in conservation?”

There’s a common narrative shared by Hance and other like-minded commentators. Hope, according to this line of thinking, is a bulwark against the despair that would be an all-too-natural reaction to torrents of environmental bad news. Ecologist Steve Morton calls it “the elixir of (environmental) action,” whereas, to feel hopeless, according to numerous sources, is to be numbered and paralyzed into inaction. Gregory Balmford and Nancy Knowlton, architects of the Earth Optimism movement, even argue that hopelessness among conservationists could become “a driver of extinction.”

I’m an ecologist, not a psychologist, but I’ve long been struck by the centrality of hope in professional conservation discourse. Commentaries in the conservation literature extoll and debate the virtues of having “hope in hard times.” But are we, I asked myself, expecting hope to do too much?

To investigate this question, I teamed up with psychology Ph.D. candidate Elizabeth Williams and sustainability expert Melanie Zurba to investigate the many dimensions of hope and to ask whether hope’s really a necessary prerequisite for people to engage in environmental action. Our resulting review, published last year in the journal Biological Conservation, reached back to the earliest definitions and psychological theories of hope and found that it has both benefits and pitfalls for people working on conservation and environmental issues.

Strong claims for the power of hope in modern human affairs follow a long history in which hope was seen in a negative light. Ancient Greek writers, for example, often perceived hope as a refuge for wishful thinkers, the gullible and those who underestimated the gravity of their situations.

It was left to thinkers from the Enlightenment and later to reframe hope as a positive attribute with goals that can be actively pursued.

That brings us to contemporary positive psychology, which defines hope as “a positive motivational state” (not an emotion) that enables people to exercise agency (goal-directed energy) in the pursuit of objectives that are possible but not 100% certain.

This type of “active” or “authentic” hope is what conservation biologist David Orr had in mind when he described hope as “a verb with its sleeves rolled up.” Orr’s folksy definition capture the idea of hope as having pragmatic, achievable goals that demand conservationists take the actions needed to realize them. You may not know how to save the world, but you can hope to conserve a watershed.

First, there’s optimism. Unlike active hope, optimism’s objectives may be vague or even absent. Optimism is best thought of as a sunny expectation that “everything will turn out for the best.”

Then there’s passive hope, in which individuals hope for favorable but fuzzily defined outcomes such as “a solution” to climate change. Passive hope may actually be demotivational. For example, those who feel hopeful because they only expose themselves to positive visions of the future may fail to follow through on those feelings to make them real.

There’s also absolute hope, the refusal to despair in the face of an inevitably bad future, like a terminal illness. A patient may be terminal, but absolute hope allows them to maintain their sense of self and resist dwelling on the diagnosis.

Finally, at the extreme end of making the best out of bad times, there’s radical hope, which helps to makes unsatisfactory or disastrous present circumstances tolerable by maintaining hope for future deliverance. You can have radical hope without knowing what future deliverance looks like or when it will arrive. One individual often held up as an archetype of radical hope is Plenty Coups, last principal chief of the Crow Nation, who led his people through a period in which Crow traditions of hunting and warriorship were destroyed.

Though it may seem noble, radical hope can be a slippery slope to “positive reappraisal,” where negative outcomes are re-evaluated as opportunities or even as beneficial. Naturalist and blogger Phil Barnett appeared to be practicing positive reappraisal when he wrote: “…if only for the sake of our mental health, we can accept the reality of a globe, everywhere sullied by man’s footprints and perhaps even learn to love it.” In a real-world conservation example, I’d posit that both radical hope and positive reappraisal lie behind the “Hail Mary” plan to clone the functionally extinct northern white rhinoceros, now down to two individuals, both of them female.

To Hope or to Hope Not?

Not everyone buys into the hope agenda. Environmental writers Paul Kingsnorth and Derrick Jensen accuse environmentalists of buying into false hope. Echoing the ancient Greeks, they say that false hope leads to unattainable goals, illusory expectations, and inept action strategies. To Kingsnorth, “False hope is worse than no hope.” Jensen seems to be thinking about both false hope and radical hope when he says hope is a “longing for a future condition over which you have no agency; it means you are essentially powerless.”

Furthermore, absence of hope doesn’t stop some people from acting in pro-environmental ways. Greta Thunberg doesn’t always come across as a fount of positivity, yet she continues to fight for the world she wants. Neither Kingsnorth nor Jensen feels hopeful, yet each continues to act in the world, albeit from outside mainstream environmentalism. To Jensen, removing false hope is a precondition for action: “When we stop hoping the situation will somehow not get worse, then we are finally free — truly free — to honestly start working to resolve it.”

So, to hope or not to hope? Should we embrace and encourage hope because it is the “elixir of conservation”? Or should we avoid investing too much emotional and professional capital in hope? Because, let’s face it, while conservationists may try to save as many endangered species and populations as possible, disappointments are inevitable.

Right now, it seems as though most conservation-oriented literature is solidly on hope’s side. A sparse but growing body of psychological research supports a role for active hope in helping conservationists “stay in the game.” During the past six months two intellectual heavy hitters, political scientist Thomas Homer-Dixon and science communicator Elin Kelsey, brought out books extolling the virtues of hope. Their titles: Commanding Hope (Homer-Dixon) and Hope Matters (Kelsey) leave little doubt as to where their authors stand on the importance of hope.

At the end of our review, we concluded that active hope can be a powerful ingredient in conservation success, provided the complexities of hope as a motivational state are acknowledged.

We found that passive hope, radical hope and positive reappraisal seem to be unlikely motivators of success in most environmental battles. And optimism certainly won’t cut it, since optimists don’t typically feel obligated to act in the world to make their expectations real.

It’s active hope, we argue, that’s the gold standard. Only active hope provides the inspiration, agency and pathways to success that are needed for environmental action to succeed. Research in fields as diverse as athletic performance and psychotherapy has associated active hope with successful outcomes. Furthermore, active hope may provide environmental workers with a buffer of resilience against the repeated pain of environmental loss.

But hope on its own, we also found, is not particularly useful.

By themselves, expressions of hope are imperfect predictors of engagement in pro-conservation action. Nor is the direction of causation between hope and action always clear. Pro-environmental behavior may sometimes be a prelude to having hope rather than the other way round. And hope isn’t the only determinant of future action. Life goals, personality traits, cognitive biases, cultural values, childhood experience, age, gender, religion and cultural identity also influence pro-conservation attitudes and actions.

An important take-home message that emerged from our review is that conservation organizations must work to foster personal qualities and behaviors that turn active hope into action. Having a sense of personal agency, engaging in goal-directed projects, and developing clear roadmaps to the future enable conservation workers to be effective.

Leadership is also important. Strong conservation leaders inspire their troops with clear, long-term visions allied to pragmatic road maps of how to make those visons real.

And yet, as important as vision may be, it is often neglected. In a 2018 report based on interviews with 116 Canadian environmental leaders, Graham Saul, the executive director of Nature Canada, concluded that many environmental organizations lack a unifying vision around which forward-looking hopes could coalesce.

The bottom line is that having active hope helps to make conservation visions reality. But don’t expect hope to achieve good things unaided. Inspirational leadership and solid organizational scaffolding are needed to help hopeful conservation workers succeed. In the present environmental moment, conservation organizations may also need to cultivate resilience among workers and volunteers against the times when even active hope fails to pan out. 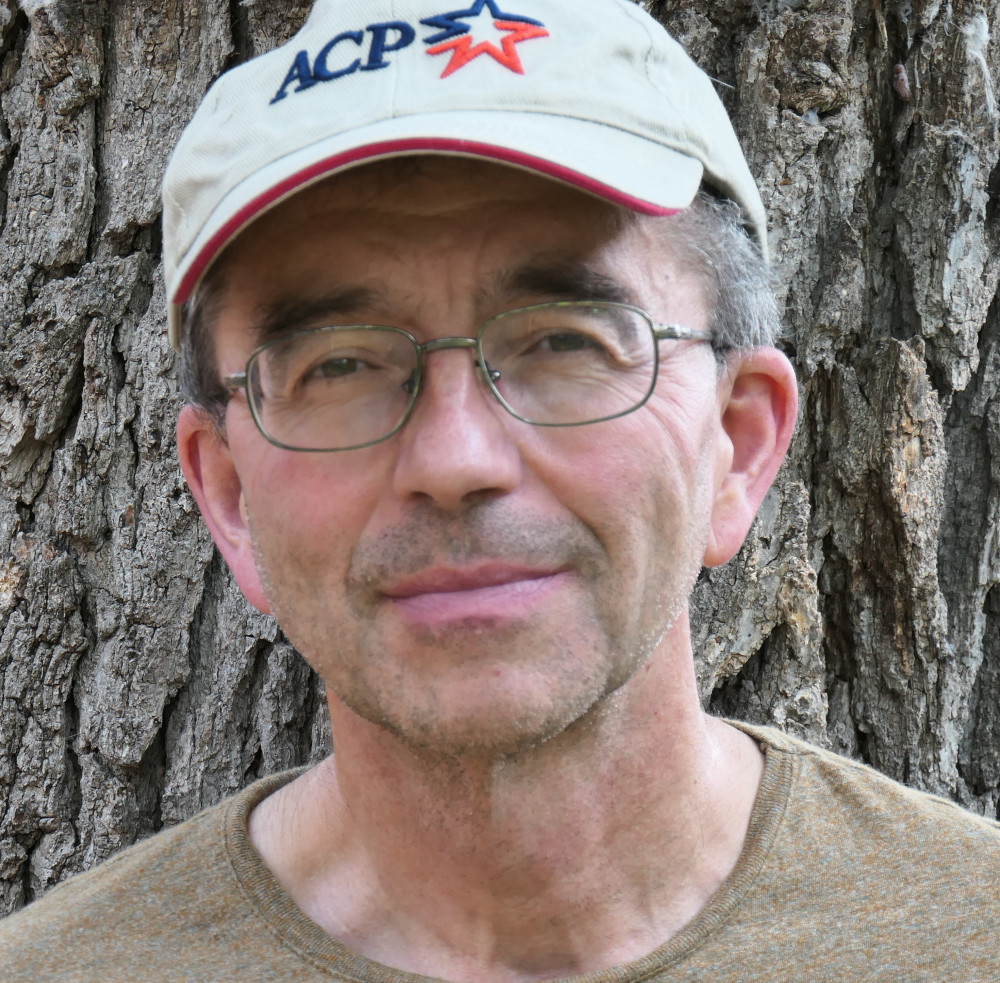 is a professor of forest ecology at the University of Winnipeg, Manitoba, Canada. In a varied career, he has worked on applied ecology and forestry projects on three continents. More recently his research has focused on climate adaptation and our individual responses to environmental change.