In Miseducation, investigative journalist Katie Worth reveals big inequities in climate education and a gap that mirrors state politics.

Sad. Afraid. Anxious. That’s how most young people, aged 16-25, said climate change made them feel when surveyed for a study in Nature. The researchers interviewed 10,000 youths in 10 countries and revealed a growing “climate anxiety” among the respondents.

That shouldn’t come as a surprise. Another recent study found children born in 2020 could face seven times more climate disasters than those born in 1960.

Climate change is likely to color every part of young people’s lives — from the jobs they hold to where they call home. And yet, despite the rise and importance of young climate activists, climate change isn’t even being taught in many U.S. schools.

Perhaps worse, some teachers are providing misleading, outdated or false information. That’s what journalist Katie Worth found when researching her new book, Miseducation: How Climate Change Is Taught in America. Sometimes, she learned, teachers don’t have the right training or resources to teach climate change. But often, the roots of the problem are much more troubling.

“Fossil fuel lobbyists, flaccid text-book companies, networks of free-marketeers and evangelical leaders, and the American political machine have each had a role in the widespread, calamitous, and in some cases, intentional miseducation of American children,” she writes in the book.

We spoke with Worth about why so many American kids aren’t getting a climate education, how to counter the inequities, and where she sees progress. 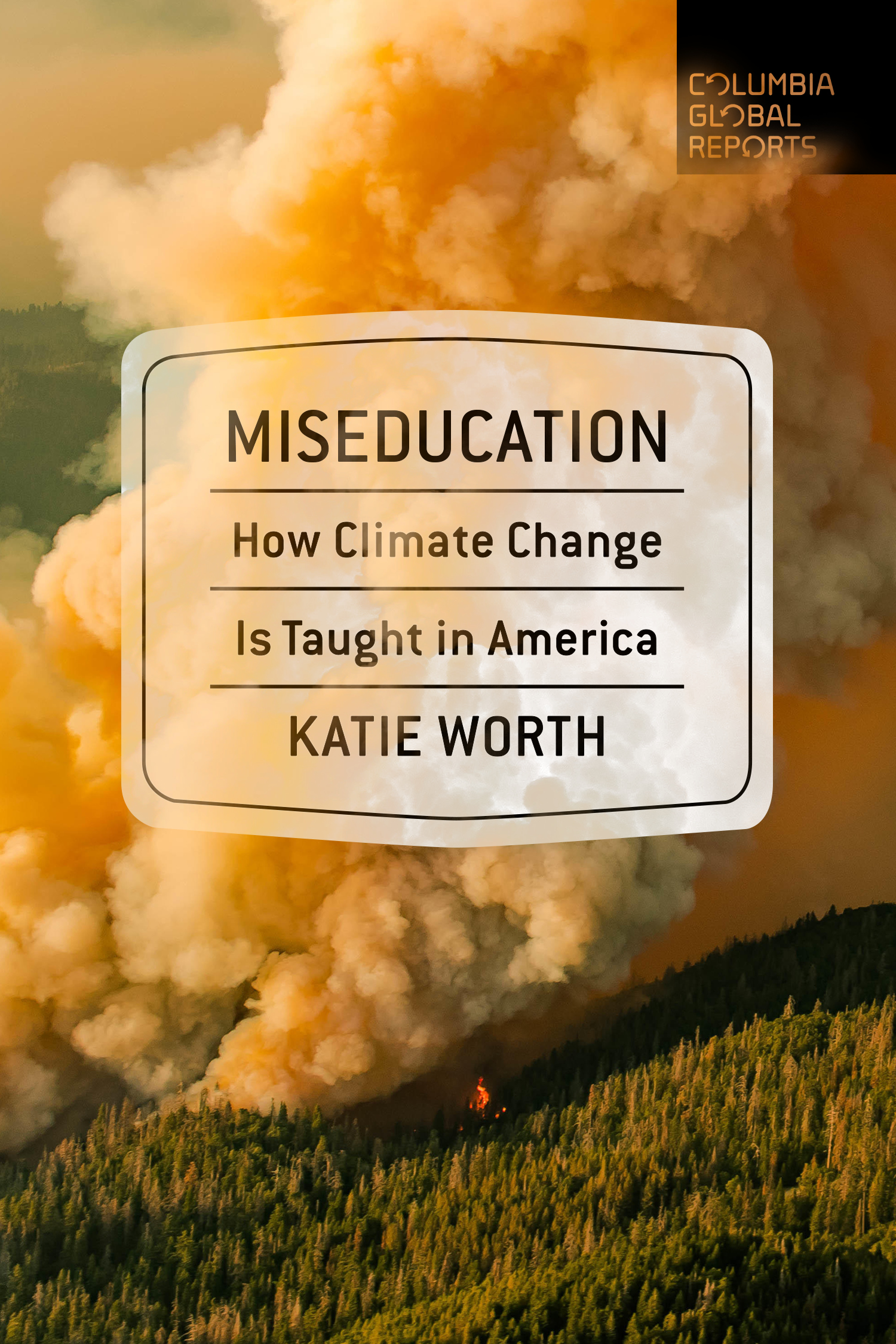 When I was a reporter for “Frontline” we got a grant to do a climate story and we went to the Marshall Islands to interview kids there about their future. Because of climate change, their homeland may not be inhabitable at some point this century.

It was really striking to us how knowledgeable the kids were about climate change. They could speak very fluently about the phenomenon and were much more articulate than most of the adults I know here.

One of the kids that we wound up featuring in our interactive documentary was this 9-year-old named Izerman whose family was thinking about moving to Oklahoma because they had some extended family there. The parents thought maybe the education would be better in Oklahoma than in the Marshall Islands. So the question came up, if these kids moved to someplace like Oklahoma, what would they learn about climate change in school?

And the answer, we found out, is basically nothing. At least that’s how it’s been, although Oklahoma just updated their academic standards to include a little bit of climate education in middle school.

When you dug into this issue further, what did you find about the rest of the country?

Education is by nature a very diverse enterprise in this country. There’s no national curriculum and we have 3 million teachers educating 50 million children enrolled in 100,000 public schools. Each of those teachers is teaching based on the state standards, but also based on their expertise and their style. State academic standards guide what a kid should know at the end of a particular grade or subject, but how they get there is very much up to the district or the teacher.

The Texas Freedom Network and the National Center for Science Education teamed up on this research and graded each state’s academic standards based on how well they taught climate change.

They found that no blue state got less than a B plus, and there were a few red states that got B pluses or even As, but the majority of red states did considerably worse. And several red states got Fs. [Editor’s note: Check climategrades.org to see how your state compares.]

Also to my knowledge, there has been one robust study of what teachers teach about climate change. And in that, one third teach it like it’s a debate: “Some scientists think this, and others think that, and what do you think?” And another one third self-reported that they tell their students that many scientists think that climate change might be natural. That’s one third of science teachers! Of course, what’s so wrong is that zero scientists actually think that. It’s just patently false information that’s being told to millions of students a year.

Another issue is textbooks that are adopted by each state or school district also vary. Some textbooks say things like, “While many scientists think that global warming is human caused, some believe that it’s natural.” And another one of my favorites says, “Climate change will have some positive effects and some less positive effects.” They couldn’t even bring themselves to say negative effects.

There are more modern textbooks that are much less equivocal about it. As you might imagine, blue states are adopting these newer and more accurate textbooks, while a lot of the red states aren’t. That also reinforces this red-blue divide.

So, what you come to is an equity issue. Depending on what state you’re in, you might learn something about the phenomenon that will totally define the century you’re born into, or you might not.

How does this information, or misinformation, in school align with what kids are hearing outside the classroom or actually experiencing in their lives?

Of course the most important people in a kid’s life are their parents or their guardians, right? So if their parents or guardians think climate change is a hoax — and I met many kids who told me that — then they are very motivated to think that too, especially when they’re young.

I grew up in the town of Chico, which is in Northern California, 14 miles from Paradise, which burned down in the 2018 Camp fire. I attended a seventh-grade science class of Paradise Intermediate School for a few weeks the year of the fire. The school had been displaced because the whole town burned down, so they moved to Chico into the only real estate that was available, a shuttered big-box hardware store.

The teacher was teaching a unit on climate change, which of course scientists say is contributing to growing wildfires in California and the West, including the Camp fire. He was teaching these kids about climate change and some of the kids were hearing at home that it was a hoax. That was something that the teacher had to navigate.

What can we do to help ensure kids — regardless of their state’s politics — get a good climate education?

Teachers need to be trained in this stuff, too. A lot of teachers didn’t learn about climate change themselves in school because it wasn’t taught until recently. Fortunately, there are a lot of resources for professional development and also lesson plans. Some of this has been amassed on a one-stop portal.

Climate doubt also didn’t arise in classrooms by accident or spontaneously. It arose because there was a long climate-doubt campaign perpetuated mainly by fossil fuel companies and their allies. A doubtful public is a public that will hesitate to take action, right? So, if you’re not 100% sure if there’s a threat then you’re not likely to agree to new taxes or making major changes to the economy. The fossil fuel industry wants to keep seeding this doubt, and there’s been an effort to get that doubt into schools, too, [with fossil fuel-funded education programs, curricula, field trips and other materials] because kids become the deciders of tomorrow.

What do you see that’s encouraging?

Hope isn’t my area of specialty, but I do think that education is powerful. And I don’t mean to minimize this: There are tons of teachers out there who are intrepid and — no matter what their state academic standards are, or the politics of their school districts — they’re working really hard to make sure that kids are armed with the correct information about the world and what it’s facing.

There’s other encouraging news. Washington, for example, has a project where they are giving professional development about climate change to every science teacher in the state. And some other teachers as well. New Jersey just adopted academic standards that include climate change in not just science, but in civics, history, English and other subjects. Then there’s activists like Greta Thunberg and a lot of youth leadership.

We know that Gen Z is much more likely to be worried about the climate emergency we’re facing than any of their elders. And they’re not buying the doubt and the apathy as much as older generations have. They’ve been really crucial in driving action and in pointing the camera at this issue.

Schools aren’t the only place that they’re encountering this issue, there’s a lot of opportunity for them to learn about it elsewhere. But they should have the right to learn about it in their public education, no matter where they live.

I hope that people who read the book or learn about this issue who have kids in their lives inquire about what they’re learning in school about climate change.

Here’s another example: There was an earth science textbook where the kind of “rocks for jocks” version of the class — the general education science class — hardly includes anything about climate change and even questions whether it was even happening. But the advanced version of this same book spent a ton of time on climate change.

So the implication is that the “academically successful” kids who have the resources to take advanced classes have the opportunity to learn about this issue that may shape all their future decisions, but not other kids.

That’s not how it should be. You would want the lowest common denominator to be everybody getting some good education about this issue and not just the wealthy, white, ambitious kids.

So I think asking your kids’ schools what they’re teaching about this and who they are teaching is important. It’s worth putting a bit of community pressure on schools and districts to make sure that they’re educating all their kids.