The book takes an…unusual approach, but it still contains a few worthwhile concepts.

How did countries like Sweden and France make progress moving away from fossil fuels, and can other places follow in their footsteps? 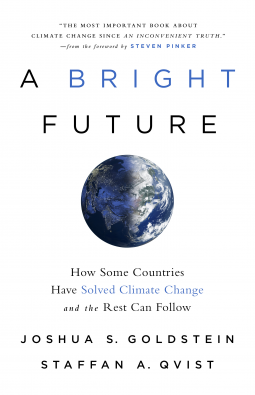 According to a new book, A Bright Future by Joshua S. Goldstein and Staffan A. Qvist, the answer is an energy technique the Swedes call “kärnkraft,” which the book’s cover copy proclaims is “hundreds of times safer and cleaner than coal.”

What is kärnkraft, you ask? Well, the description of the book doesn’t say.

Neither does the table of contents.

You also won’t find the answer in the foreword, by the popular science writer and psychologist Steven Pinker, although he does call A Bright Future “the most important book about climate change since An Inconvenient Truth.”

How about the book itself? The first two chapters take a similarly vague approach. In fact it takes until page 27, at the bottom of a graph depicting kärnkraft capacity in the United States, to get the definition of this mystery word.

Kärnkraft, it turns out, is the Swedish word for nuclear power.

By all rights, I should just end my review here, because this is a fairly disingenuous approach. If you’re going to make a case for something like nuclear power to save the planet, you really need to say so in Sentence Number One, not 10 percent of the way through the book. Otherwise you’re not making an honest argument — you’re just playing a bait-and-switch game with your readers in hopes of giving them a sudden eureka moment.

But here’s the thing: Goldstein and Qvist have the courage of their convictions. They do spend the rest of the book building a case for nuclear power, and although I think their proposal ultimately fails they do make a handful of admirable points along the way.

Notably, they argue, quite effectively, that the world needs to get off the carbon train as quickly as possible if we hope to stave off climate disaster. “We need rapid decarbonization,” they write, especially in a world where individual and systemic energy demands are rising every single day and the world population continues to grow.

Less effectively, they argue that renewable energy sources such as wind and solar won’t accomplish that goal, at least not by themselves, because renewables, they claim, are “variable and uncertain” (a fairly standard argument that underplays the rapid advances in battery technology). Instead they call for “nuables” — nuclear power plus renewables, “both scaling up as fast as possible.”

They make a better point about coal in the context of trying to assuage fears about the safety of nuclear energy and reactors: It’s incredibly dangerous, both as an energy source and as an industry. “Coal kills at least a million people every year worldwide” from particulate emissions, workplace accidents and coal ash spills, they write — totaling “tens of millions of people” over the past 50 years. This they compare to “something like a few thousand [deaths] from nuclear power” over the same time period. Coal, by these numbers alone, should have been shut down a long time ago.

Of course, the above statement and pages of additional facts don’t exactly make nuclear feel that safe — something the authors themselves would probably agree with, since they (somewhat dismissively) call the public’s concern about nuclear power “a gut-level fear of radiation” linked to nuclear weapons and pop culture fictions like Godzilla and the Incredible Hulk.

Still, a good chunk of the book is spent dismissing fears of radiation and nuclear waste. The science is sound, but I don’t see their arguments changing many minds. And yet, as they note, the very real threat of climate change is even scarier than the possibility of nuclear accidents.

After devoting the first half of the book to making the case for nuclear energy, Goldstein and Qvist lay out their strategy for the way forward.

First, they say, we need to keep all current nuclear plants in operation, even if they are old and past their original projected lifespan (because, they say, solar can’t replace them yet and natural gas is terrible for the climate).

Second, they suggest we should create a carbon tax to pay for decarbonization (a well-argued chapter).

Third, they argue that we need to massively scale up production of new next-generation plants in the U.S. and around the world, much as China is already doing.

On that third point the authors engage in some magical thinking. They start off citing a 2015 report by James Hansen and three other climate scientists that argued the world should build 115 new nuclear reactors each year — enough to eliminate fossil fuels worldwide by 2050. Golstein and Qvist then take this even further, making the case that tiny Sweden built one reactor a year in the late 1970s and early 1980s, so the entire world today could produce an astonishing 750 new reactors a year.

There are a few major flaws in this theory.

First, the nuclear power industry can barely handle the few construction projects on its plate. Projects are prone to long delays and massive cost overruns. For example, an advanced reactor in Finland is expected to go online later this year — 10 years late and billions of dollars over budget. A plant expansion in South Carolina was shut down after construction costs pushed Westinghouse Electric into bankruptcy.

Second, who’s going to work at all of these new facilities? Here in the United States, the nuclear workforce is rapidly aging out — 39 percent of it was eligible to retire between 2015 and 2018. The industry has spent the past several years trying to fill this gap, and has made strides since I first covered this issue in 2012, but the number of people entering the profession is still way below its high in the 1970s. In fact, in 2015 fewer than 1,200 U.S. college graduates received nuclear engineering degrees, including only about 160 Ph.Ds.

Granted, not every nuclear power job needs the most advanced degrees, and the field also employs engineers from other specialties, but the fact remains: The talent pipeline for nuclear power is still too small, and the brain drain out of the industry too big, to take on much additional capacity. Achieving the authors’ lofty goal of 750 new plants a year would require a massive overhaul of the entire world workforce, and a strategy for accomplishing this is conveniently left out of the book.

All evidence suggests that if something works to combat climate change, no matter how big or how small, it needs to be on the table. Many climate scientists argue that keeping existing nuclear plants online, and maybe even adding to them, needs to be one of those choices. That may not prove to be true as renewables continue to get more affordable and efficient. But no matter what, the authors’ vision of ramping up nuclear production so much that it eclipses the need for all fossil fuels is a pipe dream. It won’t do anything to solve the nightmare of climate change.