The new book Burn says we need to rethink our relationship with carbon and embrace one of its solid forms — biochar.

Albert Bates and Kathleen Draper have done the unthinkable: They’ve written a love story to carbon. At a time when much of the world is working on strategies to rid ourselves of carbon to combat the climate crisis, they posit in a new book that we should be embracing it. Or at least some of it.

“Right now carbon is getting a bad rap. Carbon creates dirty energy. Carbon creates grit, grime and gunk,” they write in Burn: Using Fire to Cool the Earth. “Carbon should be global-warming enemy number one. But in truth, carbon is something we should all love and cherish. Carbon is life. In the right balance, carbon gives life.” 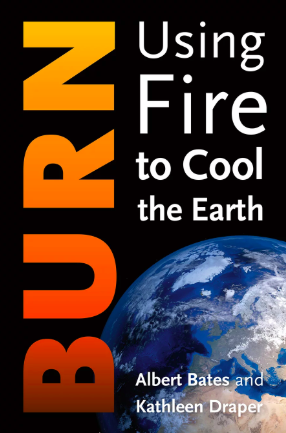 Their book focuses on the merits of one particular form of carbon, known as biochar, which a charcoal-like substance. It’s formed by taking biomass, which can come from sources such as wood, plants, crop waste, manure or solid waste, which is then heated (but not completely combusted) in a furnace with little to no oxygen — a process known as pyrolysis. The result is a stable structure that locks away carbon before it would have been emitted as those materials decay or are completely burned.

While charcoal is used mainly as a fuel, biochar instead has myriad other applications, the authors say. It’s most well-known in agricultural circles as an additive to improve soil. It’s been used for thousands of years in small-scale farming, but only more recently has it been touted to help combat climate change by sequestering carbon in that very same soil.

Sequestration of carbon is crucial in helping to address the dangers of the climate crisis, where scientists say we have to not only reduce our current greenhouse gas emissions but also create “negative emissions” by removing carbon dioxide and other greenhouses gases from the atmosphere. How we do that with appropriate technology is a hotly debated topic.

Bates and Draper say that biochar could play a role in reducing our carbon footprint, but they stop short of selling biochar as a silver bullet to fix the climate crisis. It’s presented as just one tool in the toolbox. Most research on biochar’s potential to aid in climate mitigation has looked at its use to sequester carbon in soil: Add it to soil, and it won’t break down for years, preventing the carbon from returning to the atmosphere. The authors say biochar can lock away carbon for hundreds or thousands of years, which is true under certain conditions. But not everyone is convinced: Studies have found that period can range from less than 10 years to hundreds or thousands of years, depending on soil type, the biomass used, the temperature at which the biochar was produced and other environmental conditions. And scientists have cautioned that not enough field research has been done to understand all those variables.

While there’s debate over how effective biochar will be at sequestering carbon in soil, Burn looks in great detail at other applications for biochar, whether on its own or blended with other products — a field with a lot of possibilities but also a lot of unknowns.

Both Bates and Draper have been studying biochar for years. Bates, a lawyer, scientist and teacher, has written previous books including The Post-Petroleum Survival Guide and Cookbook and The Biochar Solution. Draper is the editor of The Biochar Journal and is a board member of the International Biochar Initiative.

Other experts have expressed ample concern that the amount of land needed to scale up biochar production will cause more environmental problems than it solves and potentially result in land grabs. Bates and Draper though don’t recommend that we plant forests or fields for use in biochar production the way corn is grown for biofuels. Instead, they say, we should mine our existing waste streams and make use of things we don’t want — wood chips, coffee residue, hazelnut shells, poultry waste, rice husks… the list goes on. Turning waste into a resource is undoubtedly something we need to do more of and seems like it could work at a regional level, but it’s unclear how scalable the biochar industry would be relying on diffuse sources of biomass. Although Bates and Draper also describe their vision as a “buckshot” strategy where numerous projects of varying sizes could end up with cumulative impacts.

There’s also the added complexity that biochar, which can come from many sources, isn’t one exact thing with an industry standard that’s universally accepted. Different kinds of biomass will result in different kinds of biochar. Some may be useful for one application but not another. You don’t want to use a biochar made from a waste stream in agricultural soils, but maybe it’s better suited in toxic remediation.

While the book focuses on the climate potential of biochar, Bates and Draper spend much of their pages touting some other benefits that could result from various applications, although some don’t seem to be proven at the commercial level yet.

They write that biochar can help treat water through carbon filtration and can be used in wastewater plants or along roadsides to neutralize road salts and prevent chemicals from flowing into waterways.

Biochar has also been studied as a replacement for up to 30 percent of the sand, gravel and other aggregates used in cement production, which could help alleviate some of the environmental impacts and greenhouse gas emissions from mining those resources. Tests have also shown that bricks produced with certain kinds of biochar provide better thermal insulation, potentially helping to save on heating and cooling costs, they write.

Another area of possibility is in the paper industry. The authors write that biochar can be used to filter effluent at paper mills and then be added to paper packaging, where it would provide better insulation, protect electronic products from electro-magnetic fluxes, and absorb odor and condensation. It can even slow produce from ripening and reduce food waste, they explain.

Research is even underway to determine if biochar can help replace petroleum-based composite materials that are widely used in the manufacturing of thousands of products — everything from helicopter blades to fishing rods.

The authors describe one experiment they conducted that yielded a new composite material:

By melting extruded polystyrene foam packing peanuts and clamshell containers (C8H8) in an acetone bath — (CH3)2CO — and adding powdered biochar (C) until it stiffened, we produced a light, structural, fracture-resistant, char-tile that can be molded to any shape. It could be kitchen tiles, surfboards, iPhones, tennis rackets, boats or biodomes.

But wait: There’s more, they say. Biochar can also help clean up some of our messes, like aiding reclamation work at mine sites.

“If you put your biochar in concrete, asphalt, composites or electronics, you can then use carbonized municipal wastes and industrial wastes, which greatly expands both the available biomass supply and the available land area,” they write. “Carbon cascades convert problems into opportunities.”

How much of this is theoretical? So far, not many large-scale, commercially successful opportunities have taken off. Making biochar cost-competitive in the industries it can disrupt is still an uphill climb.

The authors say that biochar ventures are good candidates for climate funds and investment opportunities that are in search of “shovel-ready” projects. But skepticism remains among some in the scientific community.

Bates and Draper’s overall view that we need to rethink our relationship with carbon, though, isn’t bad advice.

“We have to go from spending carbon to banking it,” the authors write. “We have to reverse the way carbon is going, change direction and send it in exactly the opposite direction; down, not up. We have to flip the carbon cycle and run it backward.”

But is biochar the best way to do that? The book makes a good case for opportunities beyond sequestration in soil, but it seems we may be decades before it’s proven a robust climate solution — and by then we may all be charcoal.