Despite their reputation as destructive pests, new research reveals that armadillos support dozens of other species — including, possibly, humans.

When people encounter armadillos, they usually describe the armored mammals in derogatory terms.

“Pests” is a common word, as are “invaders” and even “speed bumps.” Many homeowners brag of “eradicating” them from their properties.

Why the hatred? Nine-banded armadillos (Dasypus novemcinctus) — the only armadillo species in the United States — have slowly expanded their range through the southern and midwestern United States over the past few decades, a process that’s sped up in recent years. Whenever they arrive, they start digging — either to find tasty insects or grubs to eat, or to carve out the large burrows they call home. Those holes can disrupt agricultural fields, backyard gardens and golf courses. And all too often, these incursions into human territory cost the cat-sized animals their lives.

“Some of my students are born and raised in Arkansas, and they’ve said that growing up, the prevailing thing to do when you see an armadillo is shoot it,” says Brett DeGregorio, a wildlife biologist and principal investigator at the USGS Fish and Wildlife Cooperative Research Unit at the University of Arkansas.

But people encountering nine-banded armadillos might want to reconsider their attitudes. It turns out their pesky burrows have a lot to offer local communities.

Home Is Where the Burrow Is

DeGregorio, his colleagues and his students study the shifting wildlife of Arkansas. “Fayetteville is a really fast-growing area, so I’m really interested in how the mammal community changes as we develop,” he says.

In their work, they spend a lot of time setting up wildlife cameras in various parts of the state and examining the images they find. Armadillos weren’t the initial targets of their research, but they proved hard to resist.

“The more cameras we put out, the more time we spent in the field, the more and more interested I got in the armadillos. And we started noticing these patterns.”

As patterns revealed new research questions, DeGregorio encouraged his students to point their motion-triggered cameras at armadillo burrows whenever they were in the field. And they found plenty of burrows to study.

“Each armadillo usually digs about ten of them within their little home range,” he says. “So even if you only have a few armadillos living in the area, you have lots of these holes, and they’re only using one at any given time.”

The burrows themselves are amazing structures. “There’s a perfectly round opening,” he says, “and they don’t go too deep into the ground — maybe three feet down — but they’re really long. If you were to stick your arm down one, you probably couldn’t get to the end.” Armadillos, he points out, don’t do very well in cold weather, and burrows help keep them warm in the winter and cool in the summer.

Ultimately, the researchers spent a year collecting images from burrows at 35 sites across Arkansas, including a woodlot in a suburban neighborhood, a heavily forested park in the Ozark Mountains, a national wildlife refuge, and a rural cattle pasture.

Along the way they documented plenty of armadillos — and a lot more.

A Community of Critters

The research, published this May in the journal Ecology and Evolution, found that nine-banded armadillo burrows were incredibly popular sites, used not just by their original architects but also by at least 64 other species. This included bobcats, foxes, opossums, raccoons, skunks, frogs, skinks, snakes, turtles and 40 bird species. 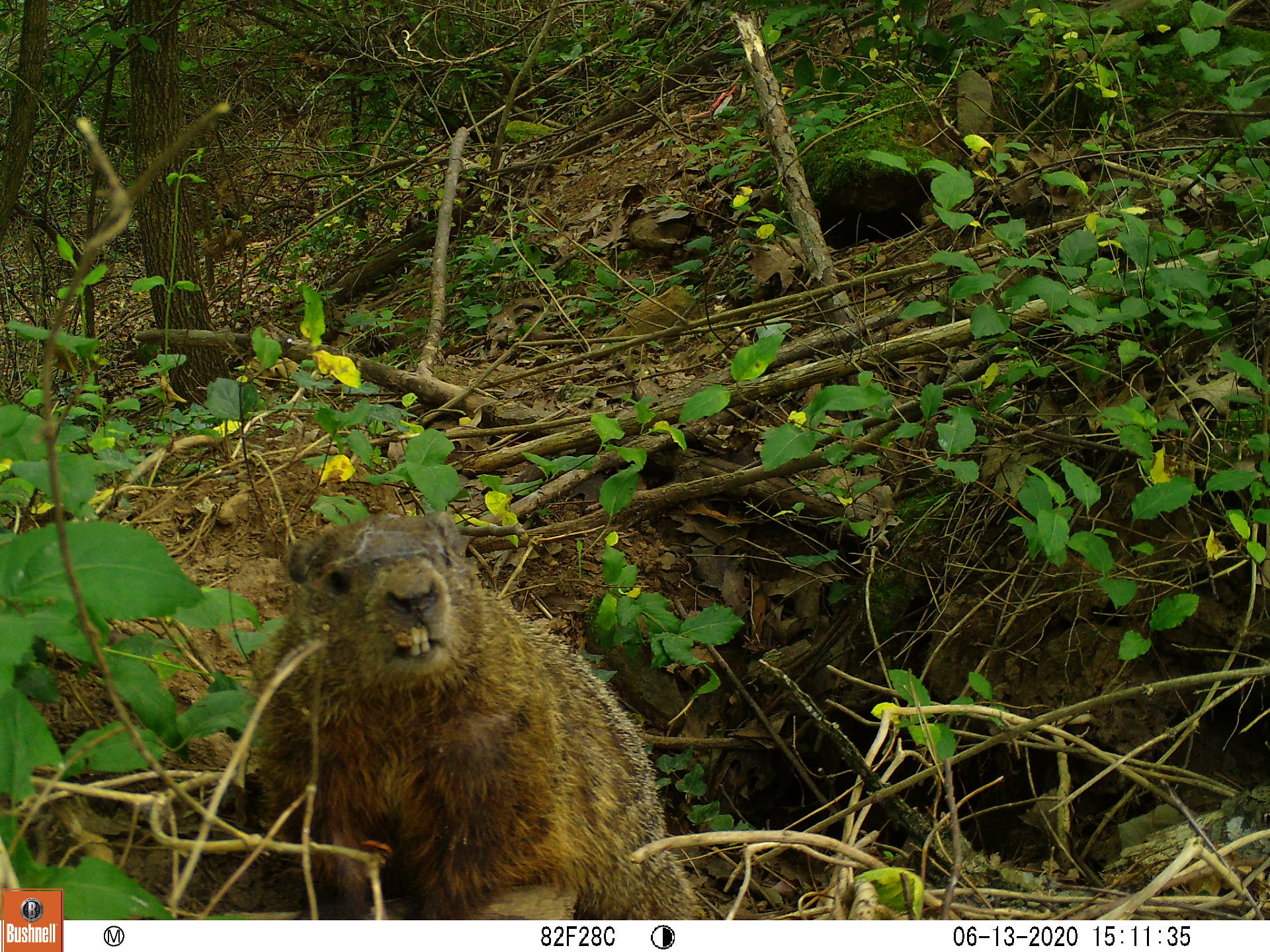 Some of these animals, like groundhogs and foxes, took over armadillo burrows and adapted them for their own use. The researchers documented one red fox giving birth in its new home, and several Virginia opossums spent long periods in burrows caring for their newborns.

Other animals used the burrows to store food. Cameras frequently caught gray squirrels hiding acorns near or on burrow entrances and later digging them up — if mice didn’t steal them first.

Still other species used burrows as hunting sites. Those acorn-seeking mice made great prey for red-tailed hawks, which appeared to stake out burrow entrances.

DeGregorio says he wasn’t surprised by what they found because similar behavior has been documented around the burrow of other species — notably, tortoises.

“Gopher and desert tortoises get a lot of credit for being these ecosystem engineers because they also dig these extensive burrow systems,” he says. “That’s one of the key talking points for conservation of the tortoises: that they benefit so many other species.”

He expected a similarly extensive list of species benefiting from armadillo burrows — and he found it: “They create a lot of refuges for other animals to take advantage of.” 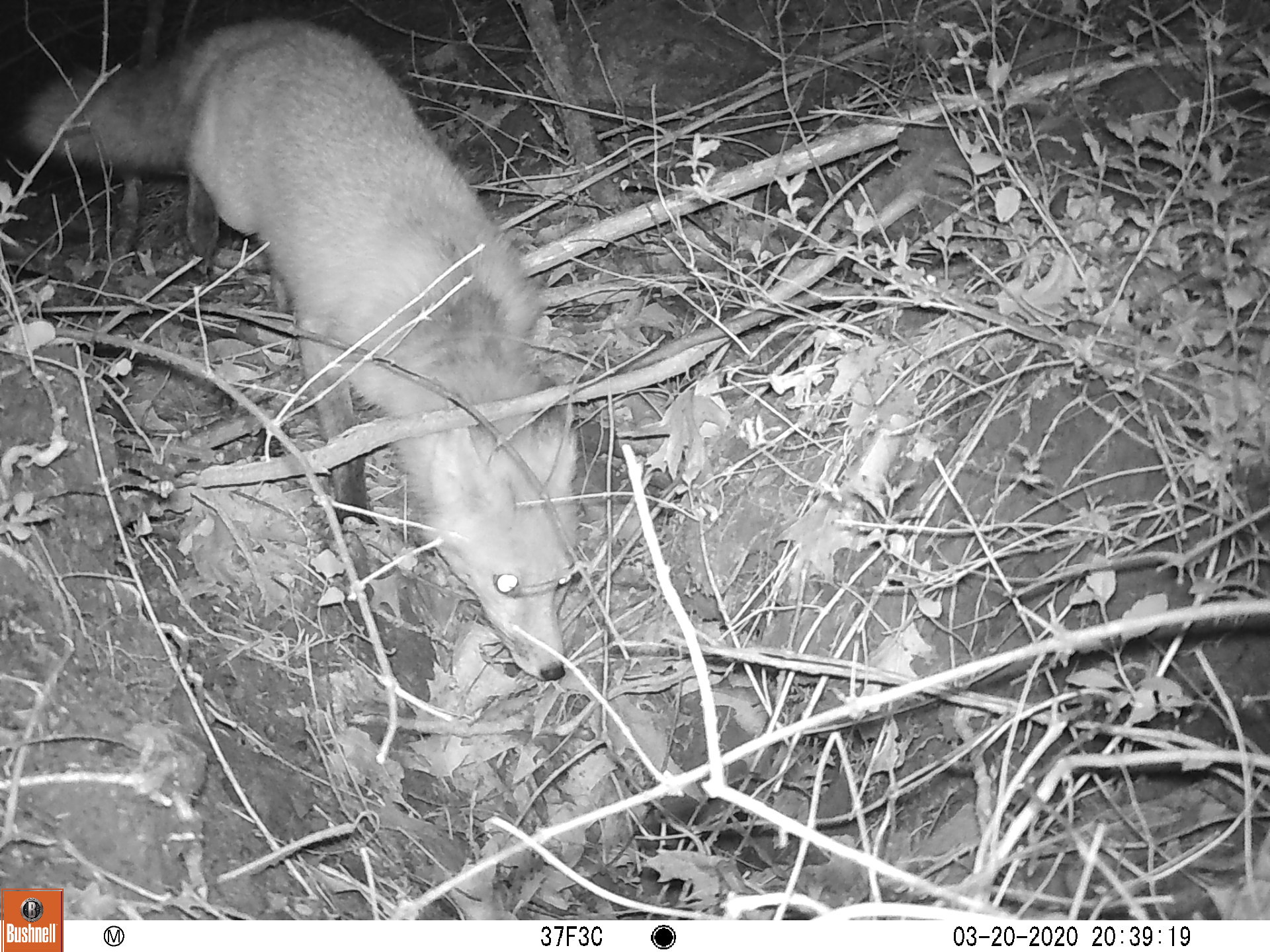 That may provide a whole other layer of benefits.

“If you’ve got armadillos around, the general biodiversity in that area is probably higher,” DeGregorio says. “To turn this into a selfish, human-centric thing: We know that biodiversity is directly linked to many human health benefits. One of the species we saw using these burrows the most was the Virginia opossum, which are amazing tick predators. The more opossum we have around, the fewer ticks and the lower prevalence of Lyme disease and the other nasty stuff that keeps us up at night. If armadillos can contribute to that, especially in suburban and rapidly developing areas where they persist really well, I think we should embrace that.”

But those rapidly developing areas come with costs for armadillos.

In another study stemming from the same research, DeGregorio and his team found that humans don’t always make the best neighbors for these armored animals.

It’s not just their perpetual persecution of armadillos as “pests.” It’s also the noise.

The study found that the further armadillos got from Fayetteville, the more active they were during the day. Closer to the city, though, the armadillos were more active in the quiet of the night, when humans wouldn’t disturb them.

Nocturnal activity may make armadillos safer from humans, but it creates other threats.

For one thing, moving around at night exposes them to nocturnal predators like great horned owls and cougars.

For another, it’s just colder at night.

“Armadillos have a really low body temperature,” DeGregorio says. “When we force them to be active during the coldest parts of the night, during the winter, we’re making them do something that they don’t want to do. There’s a real cost to that. It takes them days and days to recover.”

And yet, they persist. No one knows why they’ve expanded their range so much in recent years — some say it’s climate change, while DeGregorio theorizes human development helped pave their way. Whatever the reason, it keeps bringing nine-banded armadillos to other parts of the United States.

And they’ve accomplished this spread in spite of their other … challenges.

“They’re a puzzling species,” DeGregorio says. “One of the things that really strikes you when you start working in armadillo country is kind of how clueless they seem. They have poor eyesight, and when they’re out foraging, they’re so focused on the ground. If you just stand still, it’s not uncommon for them to bump into your legs and then, you know, panic, jump in the air, then run away.”

None of their shortcomings seems to stop them from surviving, thriving and contributing to their surroundings.

“Not only are they surviving in the wild — they’re also extremely adaptable,” he says. “They’re spreading their geographic range at a remarkable rate, and they’re really changing the environment to the benefit of other animals around them.”

Will this research help challenge people’s unfair attitude toward armadillos? “I would love to see that perception change a little bit,” he admits.

It has certainly shifted his own idea of the species, DeGregorio says. He used to see armadillos as “this kind of goofy, overlooked animal.” Now, he says, it’s changed to “Wow — they make a meaningful difference for the ecosystem.”